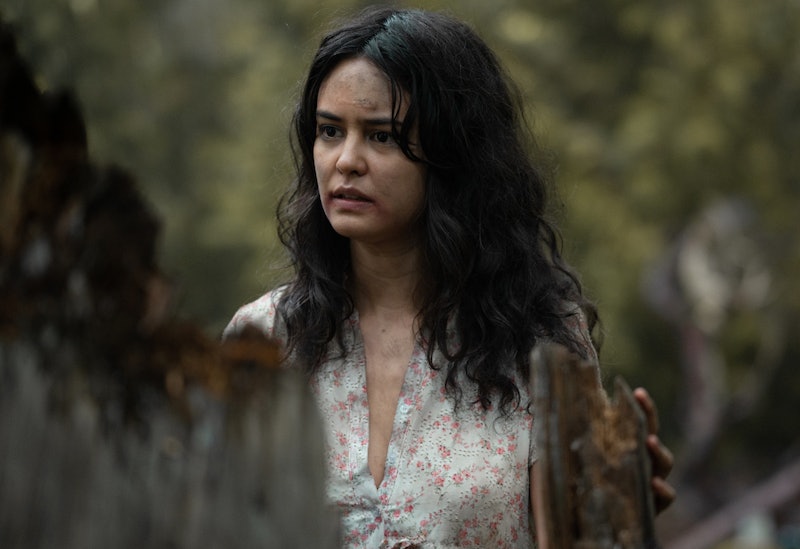 We don’t get a complete answer to that question in the Season 1 finale, but we do get some clarity about who leads them down this dark path: the Antler Queen previewed at the start of the show is definitely Lottie. Though the girls initially dismissed her powers of premonition as a symptom of her mental illness, the finale shows their opinions starting to shift. After a terrifying homecoming dance — during which Lottie and Shauna nearly killed Travis while high on mushrooms — Lottie tells everyone that they won’t be hungry for long. Cue a giant bear walking out of the forest, which Lottie calmly walks up to and stabs just as they’re all on the brink of starvation. “With the bear, there’s this ambiguity of, ‘Is this one of her crazy moments, or is something else going on?’” Courtney Eaton, who plays Lottie, tells Bustle. It appears to “almost lay down and bow down for Lottie,” she adds, which suggests Lottie somehow summoned the animal or has a connection to it.

“What I loved about the script is the ambiguity,” Eaton says of Lottie’s visions. “Is it a gift? Is she sick? Or is Lottie feeding off the fear and energy of the other girls? I didn't want to drive it from a place of her having a mental illness because that’s been portrayed in a lot of negative ways before.”

When the girls sit down to eat the bear, Van asks Lottie to lead them in prayer — positioning her as their religious leader after the death of Laura Lee. Lottie notably thanks the forest — rather than God — for the meal. And in the final scene of the season, we see her approach a hollowed out tree and offer the bear’s heart as a sacrifice. She says a line in French that roughly translates to “spill blood, friends” and then says in English, “Let the darkness set us free.” Van and Misty kneel behind her.

Eaton sees this gesture as an homage to Laura Lee, who was the first person to take her visions seriously and acknowledge them as a gift rather than a curse. “[Lottie] is struggling so much in the wilderness, and in a last ditch effort she reaches out to Laura Lee and latches on to something that's bigger than [herself],” Eaton explains. While it’s unclear if Lottie genuinely sees the forest as some sort of higher power, Eaton says it’s an attempt to “reach for answers in every possible way.”

As for why it’s Van and Misty who go along with Lottie’s ritual? Well, Van has been wearing Lottie’s bone talisman since Taissa’s failed excursion, which Lottie tried to warn them about in advance. Misty, meanwhile, is just there for self-preservation. “I always guessed that Misty would be there because she's always gonna manipulate the situation however she can,” Eaton says. “She sees the power shift towards Lottie, and she's going to try to jump on the right side, especially since she's already been isolated by the rest of the group [for accidentally drugging everyone].”

In the present timeline, we also learn that Lottie is still alive and pulling strings. After accepting that Travis (maybe) died by suicide, an adult Natalie prepares to shoot herself just as a group of people burst in and kidnap her. They’re wearing lavender outfits and that mysterious symbol from the woods (“I don't know what the meaning of it is, but Lottie just takes it and runs with it,” Eaton says). At the same time, Natalie’s old friend Suzie leaves a voicemail saying that someone’s been following her since she found out who drained Travis’ bank account. “Who the f*ck is Lottie Matthews?” she demands.

This will be the central question in Yellowjackets Season 2, where it’s likely we’ll finally meet an adult Lottie. Eaton says the show’s team always knew Lottie would end up as a “crazy cult leader,” and that they actually tried to include an adult Lottie in Season 1 but it didn’t pan out. “Lottie is so complicated, and I think the adult version of her will be a full flip. She's not going to be the same person at all,” Eaton says. “Lottie starts out as this empath, who keeps to herself and doesn’t trust herself. I think adult Lottie’s the complete opposite side of that.”

Eaton also acknowledges that not everything may be as it appears, and it’s possible Lottie is both the Antler Queen and the girl who ends up dead in the fire pit, as some fans have theorized. “I don’t want to be the pit girl! But I can also see that,” Eaton says. “Maybe she does end up dying out there, and someone's using her name. Or maybe [an adult Lottie] is locked away and getting help.”

This article was originally published on Jan. 16, 2022