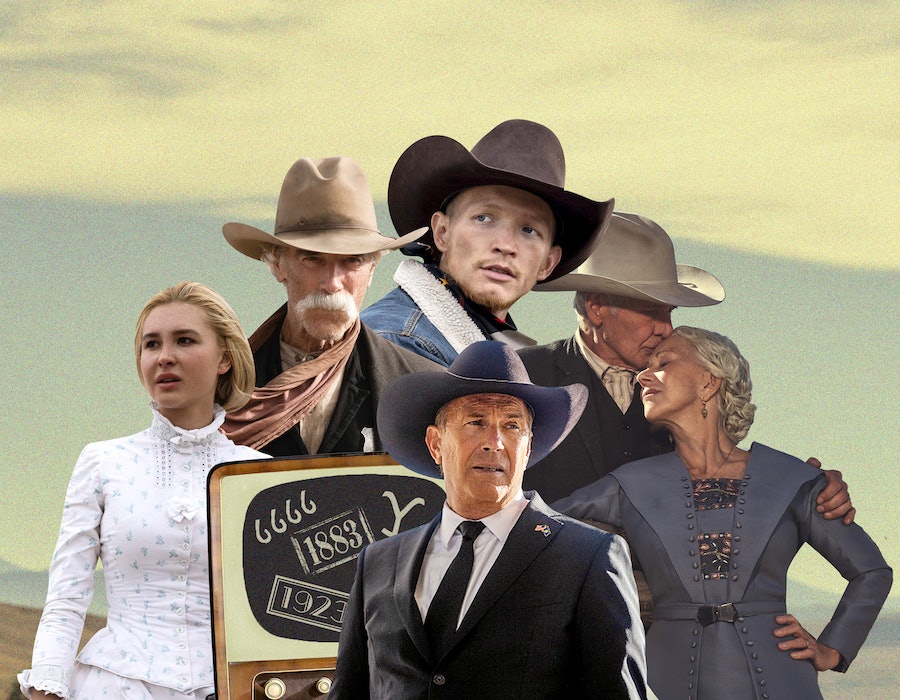 Shonda Rhimes. Ryan Murphy. Dick Wolf. The pantheon of brand-name showrunners is a small and exclusive group. But if the name Taylor Sheridan doesn’t ring a bell to you yet, it’s time you catch up. Heralded as a god to a large portion of dads, Middle America, and dads in Middle America, Sheridan created the most-watched program on television last year besides NFL football. I’m speaking, of course, of the flagship series known to some as the “red-state Game of Thrones” and others simply as appointment television: Yellowstone.

If you’re a coastal elite without cable, a Paramount Plus account, or a thirst for watching brooding white men ride horses, you’re probably wondering: what is Yellowstone, really, and is it really that big of a deal? The answer is manifold. Yellowstone is a thing you can talk about when you go home to visit your parents. Yellowstone fandom is lifestyle you can proudly wear on a novelty T-shirt. Yellowstone is a rapidly expanding multiverse of content.

So, what is Yellowstone about?

While Yellowstone gets compared to Game of Thrones in terms of its eye-popping audience size — the Season 5 premiere drew 10.3 million viewers, while the premiere of the GoT spin-off House of the Dragon was viewed by 9.99 million — the content of the series draws parallels to another HBO mainstay: Succession. Both Succession and Yellowstone center on a ruthless patriarch (Logan Roy and John Dutton, respectively) battling to maintain control of an empire that no longer seems to have a place in our current tech-driven culture: a media conglomerate (but like, a very analog one) and a Montana cattle ranch (which is definitely not run on renewable energy). As Town & Country pointed out, the Roy and Dutton families both consist of three sons with varying degrees of competency, and one smart, shrewd daughter. But arguably the most interesting parallel between the two series lies in their approach to conservative politics. While much of Succession is set in and skewers the world of the ultra-rich and powerful and the machinations a right-wing news organization, Yellowstone takes place in rural Montana and supplies viewers with enough pastoral porn to glamorize our current rural-vs.-urban culture war.

What about those Yellowstone spin-offs?

Though Succession has garnered more prestige and awards than Yellowstone, Sheridan’s series has won him something arguably more valuable: an entire cinematic universe. In 2021, he signed a multi-year development deal with Paramount that’s rumored to pay him $200 million. (For context, when Netflix famously poached Rhimes from ABC she was offered half of that — though she appears to have later gotten a raise.) With that massive sum comes what many have taken to calling the “Taylorverse”: a solar system’s worth of Sheridan-created programming. Though some of these shows are standalone programs — like the Sylvester Stallone-starring Tulsa King or the soon-to-be released Zoe Saldana vehicle, Lioness — a large bulk of the Taylorverse consists of Yellowstone spin-offs, some of which center on the Dutton family throughout history, and others that follow fan-favorite characters.

Let’s break them down, one by one.

Yellowstone prequel 1883 tells the story of how the Duttons originally headed out West via wagon train, and how they came to win the land that would ultimately become Yellowstone Ranch. While the show stars Tim McGraw and Faith Hill as the OG Duttons, the true hero of the series is Isabel May, who plays their daughter Elsa. Elsa is the apple of her #girldad father’s eye: she’s a skilled cowboy, a fearless adventurer, and she — prepare to clutch your pearls — opts to wear pants while the rest of the women wear dresses throughout their time on the trail.

But despite sounding a bit like the girlboss needle in a patriarchal haystack, 1883 is the Ivanka Trump of spin-offs. For as many shots we get of Elsa riding horses with the boys, at the end of the day, it’s her father James who holds all the power.

The spin-off to this spin-off is going in a decidedly different direction. Perhaps this is because Sheridan couldn’t convince his A-list cast to come back aboard the wagon train for a second season. (According to The Atlantic, filming for 1883 took place in both the “extreme heat and cold,” which is... less than ideal.) Thankfully, Sheridan never runs out of ideas. 1883: Bass Reeves will center on —you guessed it — Bass Reeves, a real-life African American lawman who is believed to be the inspiration for The Lone Ranger and will be played by David Oyelowo. Further plot details for this one are being kept under wraps, but apparently Cole Hauser, who plays Rip in the modern day Yellowstone, filmed a cameo on the series. Justice for Rip fans everywhere.

1923 stars Harrison Ford and Helen Mirren as Jacob and Cara Dutton, the brother and sister-in-law of McGraw’s James Dutton. When we meet them, the Yellowstone ranch has already been built, and it’s already made them and their land target. In true Yellowstone fashion, there’s no shortage of enemies. The Duttons are also struggling amid the fallout from World War I, the limitations of the Prohibition era, and the beginnings of the Great Depression. But if the Duttons before and after them are any indication, Jacob and Cara will have no trouble holding down the fort.

Currently in development at the Paramount Network

Taylor Sheridan isn’t exactly a man without vanity. This is the guy who wrote himself into Yellowstone, frequently popping up in the show as horse trader and rodeo performer Travis Wheatley (a role that just so happens to allow him to show off his cowboying skills). But 6666 — which, for the uninitiated, is pronounced “four sixes” — is his most gratuitous act of vanity of all.

6666 is based on a real ranch of the same name, one that was built in 1900 and purchased by Sheridan in February 2020. (Though it was listed for $347.7 million, the exact amount Sheridan shilled out for it is unknown.) The exact plot of 6666 is also unknown, though it’s rumored that it will center on Yellowstone’s ne'er-do-well rancher, Jimmy (Jefferson White). But what is certain is that the series would be a major flex for Sheridan — and a way to show off all 266,000 of the 6666 ranch’s acres.

Nope! The only person working harder than Kris Jenner is Taylor Sheridan. In addition to producing a second season of 1923 — it’s currently in negotiations — there are at least two more spin-offs being discussed. One would follow the Duttons in the 1940s, and the other would be a look at the dynasty in the 1960s. Because, hey, 6666 ranch isn’t going to pay for itself.