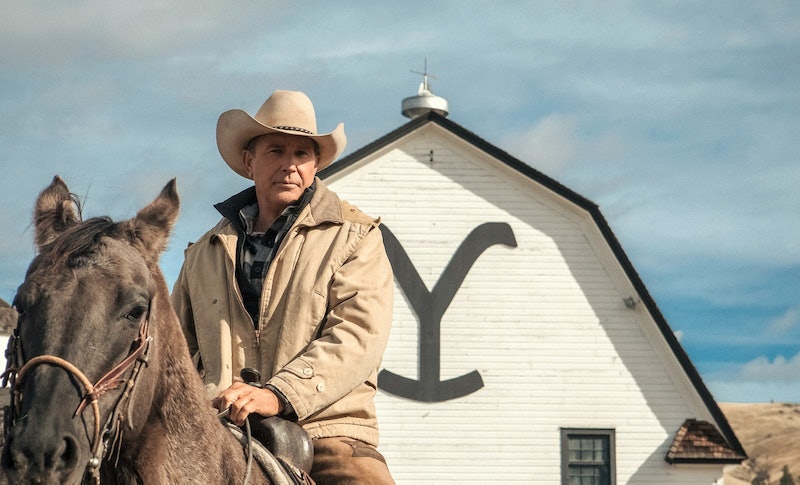 If Kevin Costner riding a horse against the backdrop of idyllic landscapes in Paramount’s Yellowstone made you consider donning a cowboy hat and heading to a nearby ranch, you’re not alone. In the Western drama Yellowstone, already on its fourth season, a Native reservation and land developers are trying to gain ownership of the Dutton family ranch, the biggest cattle ranch in all of Montana. But not if John Dutton (Costner), the family patriarch, can help it.

This December, series creator Taylor Sheridan is also releasing a Yellowstone prequel, 1883, starring Sam Elliott and real-life couple Faith Hill and Tim McGraw. The spinoff will follow the Dutton family’s journey in the late 19th century — 1883, to be exact — as they travel from the Great Plains to Montana — before they became the all-powerful Duttons fans have come to know and love. So expect to see even more unspoiled terrain in the new show.

Of the decision to shoot in locations with breathtaking views and real-life ranches sprawling with cattle, Sheridan told Entertainment Weekly, “I don’t build a world with visual effects,” adding, “I go shoot these corners of the world that people haven’t seen.” Though it’s “incredibly expensive” and “very difficult” to do so, he is adamant, “When you need 50 wagons, you’re going to see 50 [real] wagons.” If you, too, want to unleash your inner rancher, here’s a list of all the places where Yellowstone and 1883 were filmed for your visiting pleasure. Whether you travel on horseback is completely up to you.

Yellowstone And 1883 Filming Locations In Montana

The Dutton family ranch is at the crux of the Yellowstone plot; outside parties clamor for ownership of the expansive property while Costner’s John and his kin fight to protect it. And understandably so. Many a scene has been filmed in the expansive 6,000-square-foot lodge. Carla Curry, Yellowstone’s set decorator, even said in an Inside the Real Yellowstone Ranch special, “This is what makes this show sing, is that this lodge has actually become a character in our show.”

The gorgeous real estate complex is actually a real-life operational, family-owned ranch in Darby, Montana, the Chief Joseph Ranch. According to the establishment’s website, the 2,500-acre ranch was originally an apple orchard in 1914, before previous owners built lodges and barns. Fans of the show or those who just want to experience ranch life can book any of the two cabins for rent for $1,200 to $1,500 a night. Or, for a cheaper option, fans can take photos with the “Dutton Ranch” sign by the entrance.

Similarly, Yellowstone’s Broken Rock Indian Reservation led by Thomas Rainwater (Gil Birmingham) is also filmed in actual Native American territory in the state. The Crow Indian Reservation of the Crow tribe, located in southern Montana and established in 1868, is the largest of the tribal lands in the state. Of allowing the team to shoot on native land, Crow Nation tribal chairman AJ Not Afraid told Variety, “Our perception had always been more stereotypical, but here the folks at the show came out and reckoned the terrain and the people, and they got a better taste of the native side.” He added that as long as they “had had the chance to portray some of the Native facts,” they were for shooting. The casino scenes were also filmed on the property, at the Tribal Casino in Crow Agency.

Another century-old historic site featured in the series is the Montana State Capitol in Helena, where the governor’s office scenes — including the courtroom scenes — are filmed. Tourists are allowed to visit the structure, and tours around the Hall of Governors are also available.

As for the gorgeous scenery in view with the mountain ranges? That was actually filmed at Bitterroot Valley, a portion of the Rocky Mountains.

Yellowstone And 1883 Filming Locations In Texas

Sheridan, a Texas native, also included destinations in his home state in both Yellowstone and its spinoff, including two other ranches. When Jefferson White’s ranch hand character Jimmy Hurdstrom is sent away to, er, learn how to cowboy in Yellowstone Season 4, he goes to the Four Sixes Ranch. That’s actually another operational ranch in real life, spanning 260,000 acres and established in 1870. (It served as the inspiration and will be the main location for another Yellowstone spinoff, 6666, Outsider reported.) Sheridan also highlighted some of his own go-to local joints in the series, including Mary’s Brazos Cafe in Parker County.

Meanwhile, the spinoff 1883 also spent a lot of time filming in Texas this summer. Similar to the Dutton family ranch, the main ranch used for 1883, Bosque Ranch Headquarters in Weatherford, Texas, is another operational horse ranch and is, in fact, owned by the show’s creator. (Sheridan, an avid horse enthusiast, was even inducted into the Texas Cowboy Hall of Fame.) According to the ranch’s website, it boasts weekend events, competitions, and rodeos, and offers dining experiences as well as private spaces for rent.

The historic district of Fort Worth Stockyards, in Fort Worth, Texas, also previously known as “Cowtown,” was another major filming spot for 1883. The tourist spot boasts Old West gunfight reenactments during weekends and daily cattle drives (yes, including photo opportunities with the livestock). It’s an activity hub, so expect dining and shopping options for visitors. Some Fort Worth locations were already featured in Yellowstone, including the Will Rogers Memorial Center, a 120-acre equestrian and event complex, but the spinoff will highlight more of its livestock-focused history.

Also among 1883’s filming sites are the historic Granbury Square, with its streets lined with local shops and dining options, as well as the interiors of local restaurant Farina’s Winery & Cafe. To recreate the 1883 set experience, join a walking tour of Granbury and enjoy a glass of wine at Farina’s for a nightcap.

Yellowstone And 1883 Filming Locations In Utah

Most of the scenes from Seasons 1 to 3 were actually filmed at the Utah Film Studio in Park City, including the Duttons’ master bedroom, the governor’s office, as well as others that required CGI in the studio’s soundstages. Similarly, some of the Montana scenery in the first three seasons was actually the Utah landscapes of Heber City, Oakley, Grantsville, Kamas, and Logan. By the fourth season, however, Yellowstone’s production left the Beehive State and filmed exclusively in Montana and Texas.

Utah Film Studio’s vice president, Marshall Moore, shared the effect of the show’s exit on Utah’s tourism. Speaking to Deseret News, he said, “Even I was getting calls asking, ‘What’s going on with “Yellowstone?” They were hiring this, buying this. Now we don’t have any of that business.’”

Outside of studios, the series was also filmed in some real-life Utah establishments. Remember Dan Jenkins (Danny Huston), the aggressive real estate developer plotting to build a casino (and more) on Dutton property? His modern lodging abode is actually a Utah location: the Nicklaus Clubhouse Promontory Club in Park City. It boasts a golf course and an equestrian center, among other amenities, plus guests can get opt to ski in the Rocky Mountains.

The nightclub that Beth Dutton (Kelly Reilly) frequents in the series is the Outlaw Saloon in Ogden, Utah, which typically boasts of a bustling Utah nightlife. According to the San Antonio Express, the show even prominently featured Americana artists both on screen (mostly performing in the Saloon) and off, helping introduce them to a bigger audience.

More like this
Everything To Know About The 'Daisy Jones & The Six' TV Series
By Maxine Harrison and Brad Witter
The Song At The End Of 'The Last Of Us' Ep 1 Has A Deeper Meaning
By Sophie McEvoy
A New 'And Just Like That' Table Read Pic Confirms A Key Character's Return
By Jack Irvin and Grace Wehniainen
All The ’70s Easter Eggs You Missed In 'That ’90s Show'
By Grace Wehniainen
Get Even More From Bustle — Sign Up For The Newsletter
From hair trends to relationship advice, our daily newsletter has everything you need to sound like a person who’s on TikTok, even if you aren’t.