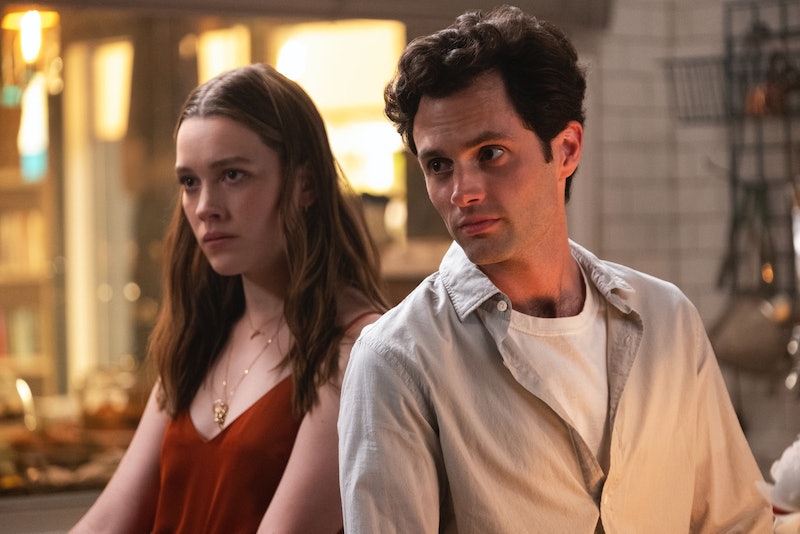 Joe and Love are getting some new neighbors on the next season of YOU. Netflix just announced that Shalita Grant and Travis VanWinkle will join the cast as Joe Goldberg (Penn Badgley) and Love Quinn's (Victoria Pedretti) new frenemies. When fans last saw them, the couple was settling down in the suburbs as they awaited the birth of their child. But with the addition of these new characters, it's clearJoe and Love won't remain in domestic bliss for too long.

Grant — who most recently appeared on Search Party and The Santa Clarita Diet — will play Sherry, "a 'Mom-fluencer' who appears down to earth, but is actually a mean girl who only pretends to welcome Love into her social circle," according to Netflix. VanWinkle, meanwhile, will play Cary, a wealthy neighbor who befriends Joe and attempts to bring him into his own social circle.

So far, the cast and crew have revealed very little information about what fans can expect from YOU Season 3, other than the fact that creator Sera Gamble began working on new episodes back in February. One thing that Gamble has made clear though, is that Joe's new role as a partner and a father won't mark a complete change in his character. No matter where he lives, Joe will always be an obsessive stalker with a dark past. "When we originally sold the show, we very broadly described it as each season would be a new love obsession and a new world," the creator told The Hollywood Reporter. "Season one is Beck in New York, and season two is Love in L.A., and so we are evoking where we would like to go, which is to a much more suburban, insular world where Joe would be a complete fish out of water."

If Season 3 does introduce a new object of Joe's obsession, that will likely cause some problems in his relationship with Love — who is just as dangerous as Joe. "I think that this woman is so deeply in her delusions that she feels so right in everything she's doing," Pedretti previously told Bustle about Love's motivations. "She's breaking apart people's lives, destroying people's families. She's not thinking about that, she's just thinking about herself."

And while Pedretti said that she thinks Love is "fully accepting of [Joe]" she's not so sure that her character would be willing to blindly support him in all of his nefarious plans. "She's a quintessential pleaser, so I think she'll do whatever it takes [to keep him]," the actor also explained to Bustle. "But maybe she has her limits."

Sadly, fans will have to wait until Season 3 premieres to find out what exactly those limits could be.