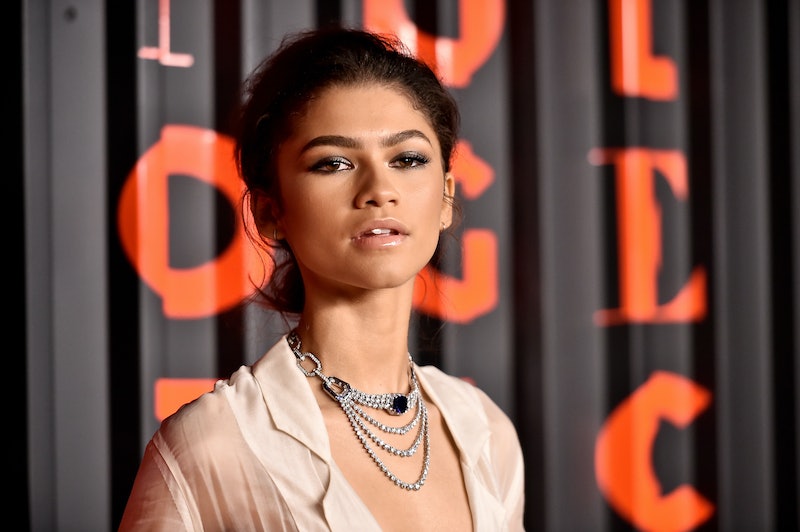 Zendaya always keeps it real, and her new interview with Vanity Fair is certainly no exception. On Tuesday, Feb. 23, the Malcolm & Marie star took the magazine's Proust Questionnaire and let it be known that there was one particular question she wasn't too fond of. When asked to reveal her favorite quality in a man, the actor corrected the question by making it gender-neutral.

"I most like in a person, how about that?" Zendaya retorted, making it clear that she's not a fan of gendered questions before providing the most wholesome response. "Kindness is not the best way to describe it, but some people are just good people and you can just feel it," she explained, "and I don't know how to explain that, but there's like this little spark they have or this little special thing that they have that you feel safe and happy around them. I don't know what that is, but some people have it and it's special."

Vanity Fair followed up by asking the actor what she likes most in a woman. "Well, I guess that's the same answer," Zendaya replied. Fans, of course, were thrilled that she altered the initial question to her standards. "Zendaya's looking out for nb people," one person wrote. "@Zendaya I am here waiting to be your non-binary babe when you are ready," another fan added. However, the correction wasn't all that surprising given Zendaya's extensive history of challenging gender stereotypes.

In a 2017 interview with InStyle, the Spider-Man: Homecoming star revealed why she decided to make her former fashion and accessories line, Daya by Zendaya, androgynous. "I just felt that if I'm going to do a clothing line, that's the only way I see it being done," she explained. "That's the future of fashion." She also told Elle at the time that she enjoys experimenting with her clothes and doesn't like to be restricted to only women's apparel.

"I like playing with fashion and bending the 'rules,' or what was 'rules' — there are no rules anymore, you know?" she told the magazine. "Fashion is way bigger than that and it's about wearing what you want and wearing what makes you feel comfortable and what makes you feel confident. So, I do not believe in a label on a shirt or a dress should tell me that I can't wear a T-shirt or a pant because it should say 'women's' or 'men's' on it, you know? That's just not how it should work."

The Greatest Showman actor echoed those same sentiments in a 2017 interview with Glamour, in which she revealed how her childhood impacted her desire for more gender-fluid clothing options. "I was lucky to have parents who let me wear what I wanted to wear and let me shop where I wanted to shop," she said. "Nine times out of 10 I was shopping in the boys section. I wore cargo shorts and hoodies. That was my uniform."