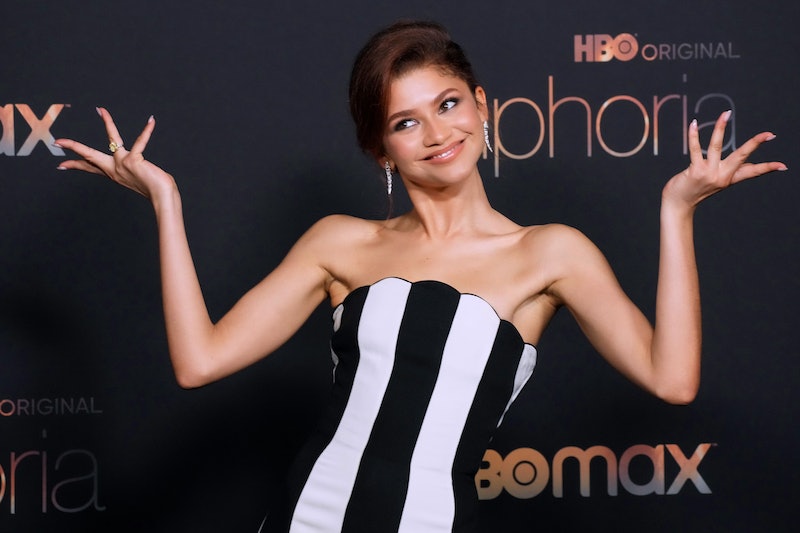 As famed poet Kacey Musgraves says, “there is a light” at the end of the tunnel, and that just might be true for Euphoria’s anti-heroine Rue Bennett. In a new cover story for The Cut published on Feb. 14, star Zendaya teased the Euphoria Season 2 finale, revealing that there is a happy ending for Rue — at least for this season.

Zendaya confirmed that Season 2 storylines changed dramatically from when HBO had originally planned to film the season in March 2020. Like other productions, Euphoria’s filming was delayed amid lockdowns and the latest season didn’t premiere until 2022. During the production halt, scripts evolved. “There are very few things that remain in the version you’re now seeing,” she explained. “The things that didn’t make it definitely needed to die.”

One of the things that didn’t make it was the ending of Rue’s Season 2 storyline, which Zendaya said was re-written to uplift viewers who relate to Rue’s struggles with addiction. “Halfway through, Sam and I were like, ‘We just can’t leave Rue here. We gotta put some f*cking hope in this show’,” she recalled. Instead, she teased that Rue begins to find her way in the Season 2 finale. “Episode 8 is where we’ll get that sense of redemption, that you aren’t the worst thing you’ve ever done in your life,” she said. However, she didn’t tease a happy ending for anyone else, meaning fans’ theories about characters meeting their doom at the end of Season 2 could still happen.

One of the storylines that did make it through the rewriting process was Episode 5, where Rue finds out her girlfriend Jules told her mother about her relapse and goes on an emotional rampage that damages her relationships. When she’s on her way to get help, Rue jumps out of her mom’s car and runs through traffic to avoid another rehab stint, resulting in a robbery, a night-long police chase, and Rue getting trapped with the same ominous drug dealer who sold her a suitcase of pills.

As Zendaya told Entertainment Weekly on Feb. 6, the episode was “so intense and scary” to film. “You can see there’s a little moment after that where all of it becomes regret,” she said. “You can see her doing it and then immediately regretting it and wondering why she’s doing it. And then she does it again, like it’s just a really painful cycle to watch her go through. And I didn’t particularly enjoy having to watch her deal with that.” It served as the rock bottom Rue needed to reach so she could wake up and find some hope in the destruction. “I think Rue deserves it,” she told The Cut, “and I think anyone who suffers with the same thing she does deserves it.”

More like this
'GoT' Star Emilia Clarke Says She "Just Can't" Watch 'House Of The Dragon'
By Brad Witter
Here’s What Happens To Bill & Frank In 'The Last Of Us' Video Game
By Brad Witter
Who Is "Daddy" Pedro Pascal Dating? People Are Thirsting Over The 'Last Of Us' Star
By Alyssa Lapid
Ashton Kutcher Wants Danny Masterson “To Be Found Innocent” In Rape Retrial
By Jake Viswanath
Get Even More From Bustle — Sign Up For The Newsletter
From hair trends to relationship advice, our daily newsletter has everything you need to sound like a person who’s on TikTok, even if you aren’t.