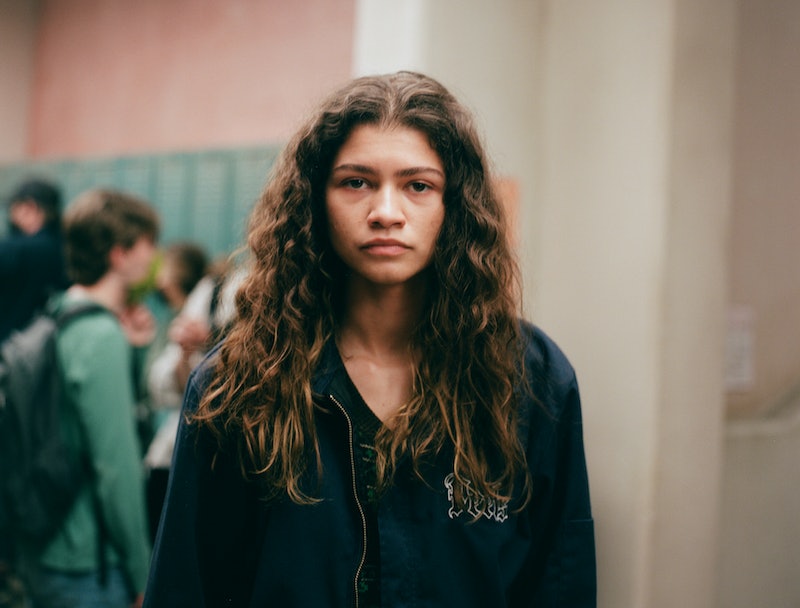 We all knew this was coming. Since the beginning of Euphoria Season 2, Rue has been caught in a downward spiral, sneaking around with Elliot (Dominic Fike), lying to Ali (Colman Domingo), and finding increasingly ludicrous ways to hide her substance misuse from her sister Gia (Storm Reid) and girlfriend Jules (Hunter Schafer). But when Rue bought $10,000 worth of drugs from Laurie (Martha Kelly) — despite Fezco’s (Angus Cloud) many warnings not to — it became clear that things were going to get really, really bad. And in Episode 5, Rue officially hits rock bottom.

After Elliot tells Jules about Rue’s relapse, Jules goes straight to Rue’s mother, Leslie (Nika King), leading to an impromptu intervention that lasts the entire episode. Initially, Leslie tells Rue that she knows she’s been using again and gently tries to get her help. But Rue immediately becomes angry. She screams and cusses at her family, reaching a terrifying frenzy when she realizes that the suitcase full of Laurie’s drugs is gone. She smashes through a door, makes a grab at Gia, and tries to assault her mother. When Rue sees Jules and Elliot sitting frozen in the living room, she’s momentarily mortified, but it’s not long before she’s consumed by fury again, calling Elliot a “f*cking snake” and telling Jules that looking at her makes her “physically f*cking ill.”

As her rage begins to fade and Elliot and Jules leave the house in silent horror, Rue falls to the ground and begs for forgiveness. “I just miss dad. I miss him a lot,” she tells her mom. The calm doesn’t last, though, and soon Rue is sprinting into traffic, running from the cops, breaking into houses, and detonating every close relationship she has as if she’s being pursued by nefarious villains and not people who deeply love her. This is Rue, completely shattered.

The whole episode is terrifyingly intense, but it’s an accurate depiction of the way substance misuse can morph people’s personalities and make them lash out in uncharacteristic ways. According to a study done by psychiatry and neuroscience professor Rita Z. Goldstein and Nora D. Volkow, the director of the National Institute on Drug Abuse (NIDA), substance misuse disrupts a number of processes in the brain. Typically, our prefrontal cortex controls our executive functions, like curbing impulsive behaviors, suppressing intense emotions, and gauging when we are sick and need help. All these processes are severely disrupted in people experiencing substance use disorder. The study found that the prefrontal cortexes of individuals who had used drugs in the last two days were dominated by craving more of the substance or feeling withdrawal; self-control, memory, emotions, and virtually everything that makes you you were almost entirely absent. Over time, the study found, this can lead to the “erosion of free will,” and individuals can become more violent or angry than they used to be — essentially, as we see with the normally mellow Rue, they can turn into a different person. We see glimpses of the real Rue as she cries and pleads with her family and friends. But then the mania takes over again, and Rue is lost to us.

There’s been a lot of discussion about Euphoria’s tendency to lean into style over substance, often prioritizing flashy cinematography over actual plot development. But creator Sam Levinson, who has been open about his past substance misuse, is at his rawest when writing about Rue’s disorder, and this episode is affirmation of that.

In the final moments, a desperate Rue winds up back at Laurie’s house looking for a place to hide out. She’s in visible agony, and in a nauseating scene, Laurie injects Rue with morphine to numb the pain, sticking the needle in so deep that some of Rue’s blood is dragged out and pushed back in. The rest of Season 2 has revolved around wild parties, clubby outfits, and overblown love triangles that have led to countless memes and TikTok trends. But there’s absolutely nothing glamorous about this. This is Euphoria at its darkest.