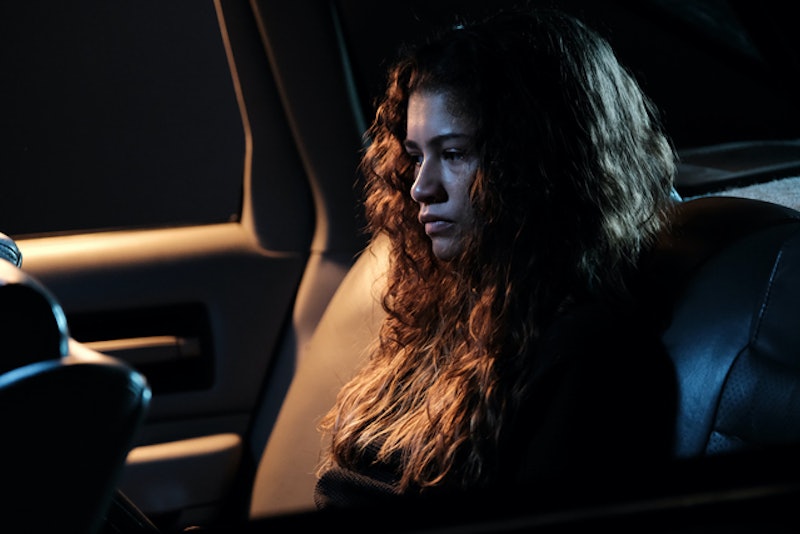 HBO’s Euphoria is finally back after a near-two-year hiatus, and the Season 2 premiere is packed with more than enough drama to make up for the extended break. Season 1 ended with Rue (Zendaya) and Jules (Hunter Schafer) professing their love for one another and planning to skip town after a tumultuous few months. But after bailing at the last minute, Rue returned home, relapsed on drugs, and overdosed while Jules left without her. The series’ two bridge episodes offered a glimpse into the characters’ respective aftermaths, with Rue discussing her attempted sobriety with her sponsor Ali (Colman Domingo) and Jules opening up to a therapist about her evolving gender identity and feelings for Rue. When the pair finally reunited on Christmas Eve, Jules apologized — only for Rue to awkwardly reply “Merry Christmas” before walking away.

Season 2 picks up a few days later at a New Year’s Eve house party, where the teens all come together for the first time after a week off from school. Rue and Jules officially make up, Maddy (Alexa Demie) and Nate (Jacob Elordi) face each other for the first time since their breakup, and a bloody fight ensues between Nate and Fezco (Angus Cloud). With the introduction of Dominic Fike as Elliot, a new friend of Rue’s, and relationships seemingly budding between several unlikely characters, there’s a lot to unpack from the hour-long premiere. Below, the cast discusses everything that unfolded — and what’s to come in the rest of Euphoria Season 2.

After getting caught up in a dangerous drug deal with Fezco and his little brother Ashtray (Javon Walton), Rue goes on one of her most intense benders yet. At the New Year’s Eve party, she encounters Elliot doing drugs in the laundry room and asks to join. When she later collapses on the floor, Elliot offers to call an ambulance, but Rue has him find her some Adderall to increase her heart rate instead. He seems worried but intrigued, and the two spend the rest of the night hanging out.

Meanwhile, Jules spends the evening searching for Rue and eventually finds her sitting by a fire. Jules asks Rue about her drug use, and she reluctantly admits that she relapsed the night Jules left town, but lies and says she only smoked weed at the party. After awkwardly parting ways, Rue runs after Jules and tells her that she wants to be with her, and the two kiss.

It’s been clear throughout the show that Jules feels a responsibility to keep Rue sober, and Schafer says it’s even tougher this time around. “As much as they weren’t transparent with each other before, there’s a new level of lacking transparency that’s happening — and potentially on both sides,” she says, adding that Rue and Jules can sense they’re both hiding things from each other.

Ultimately, Zendaya says that though Rue starts the season with “everything she says she wants” — drugs, freedom, a relationship — that’s obviously not sustainable, and she’ll need to find it within herself, not Jules or Elliot, to climb her way up from rock bottom. “There's certain things that other people can't learn for you or fix for you or feel for you, but she's just not there yet.”

After running into each other at a convenience store and sharing a flirtatious drive to the party, Nate and Cassie (Sydney Sweeney) have sex in the bathroom. Maddy knocks on the door needing to pee, unaware that her ex and best friend are hooking up on the other side. Nate lets her in to relieve herself while a stressed out Cassie hides in the bathtub; miraculously, Maddie never sees her. Later, Nate claims he’s trying to get Maddy back while talking to McKay (Algee Smith), who also tries and fails to reignite his relationship with Cassie.

“What a dumpster fire,” Elordi says of the situation. Still, he adds that Nate sees Cassie as more than a hookup, and it was interesting to explore the way his character loves someone who is so different from Maddy. “There’s a really strong element of control in there because [Cassie is] much less resistant than Maddy is, and she kind of lets him do whatever he wants to do,” Elordi explains. “There’s also a white picket fence, American dream quality to Cassie, and I think [that’s] everything he’s always wanted.”

While the coupling may come as a shock, Sweeney reminds viewers that Cassie sent Nate nude photos in Season 1. “I always felt like it was one of those relationships where nothing really happened, but there was a flirtation, then Maddy came in and [Cassie] was like, ‘OK, [he’s] Maddy’s boyfriend,’” she says. To Sweeney, Cassie and Nate do have a real connection. “They’re both lost and yearn for love, and there’s a true, beautiful love buried deep down that they find within each other.”

Maddy, of course, won’t see it that way. “I think more than anything, she’s deeply, deeply, deeply hurt by the situation and feels completely betrayed, but she also gets really angry, and we’ll see that,” Demie says of her character’s reaction to finding out about Nate and Cassie.

Lexi (Maude Apatow) spent most of Season 1 in the background, trying to support Rue in her sobriety. But she seems to be coming out of her shell in Season 2: At the party, she shares a flirty conversation with Fezco and eventually gives him her number.

Cloud recognizes that the characters are quite an “unlikely couple,” but insists they have more in common than people realize. “Neither of them have really actually had a serious crush, because Lexi is busy with school and Fezco is running a business,” he says. “When they find each other, something just clicks, and they learn a lot from each other because they’re from different worlds.”

Alas, Fezco came to the party with a bigger agenda. He threatened to kill Nate at the end of Season 1 after learning he’d been blackmailing Jules. And in the final few minutes of the Season 2 premiere, he nearly makes good on that promise, beating Nate to the ground until he’s half-conscious and his face is covered in blood.

Elordi says this won’t necessarily stop Nate from continuing to intimidate people, but it “definitely serves as a wakeup call in some regard that he’s not indestructible.” It also “intensifies the amount of time he has to sort out his issues,” Elordi continues. “Once he gets the sh*t kicked out of him, everything becomes life and death.”

On Euphoria, it always is.

More like this
At 28, Debra Jo Rupp Was Living A Much Different '70s Show
By Grace Wehniainen
Here’s What Happens To Bill & Frank In 'The Last Of Us' Video Game
By Brad Witter
The 'Gossip Girl' Reboot Creator Is “Looking For A New Home” To Air A Potential Season 3
By Brad Witter
The 8 Best Aidan Shaw Moments On 'Sex And The City'
By Grace Wehniainen
Get Even More From Bustle — Sign Up For The Newsletter
From hair trends to relationship advice, our daily newsletter has everything you need to sound like a person who’s on TikTok, even if you aren’t.