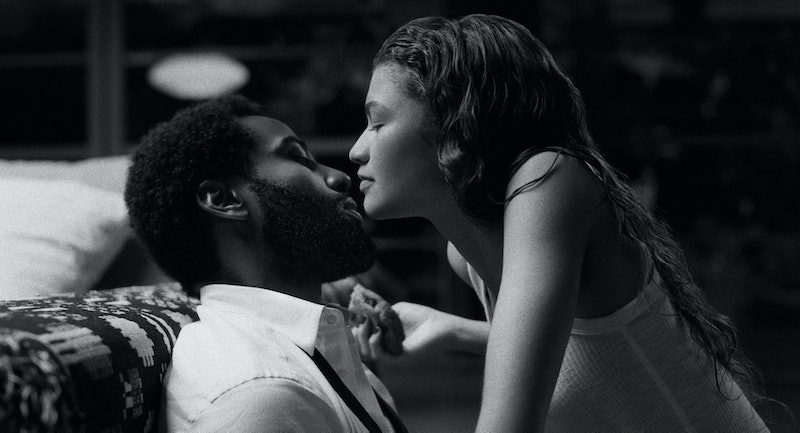 Netflix's Malcolm & Marie is under fire again, and Zendaya isn't here for it. In a recent interview with The New York Times, the 24-year-old actor responded to backlash from critics who called out the film's director, Sam Levinson, for being a white man who wrote and produced a story with Black leads. However, Zendaya told the paper that she and Washington worked closely with Levinson to make sure the Black experience was accurately represented.

When asked if she and her co-star had any say in the writing and production of the film and how their characters were portrayed, Zendaya didn't hesitate. "Yeah, of course," she said. But despite being so involved in the making of the movie, the actor told The Times that the negative reviews from critics made her and Washington feel like "a little bit of our agency was stripped away" despite being co-financiers and co-producers on the project.

Interestingly, Zendaya found parallels between the controversy surrounding Levinson directing the movie and the movie itself. "It's like Marie saying the whole movie [Malcolm's film] is also mine. But actually in real life, we do have the credit, this is ours, and John David, I, and Sam equally own this film," she said. "It's not like it belongs to someone else and I just got cast in it. He wrote it for us too, and I think if you're going to write something, you have to acknowledge experiences of the [Black] character you're writing. I thought a lot of conversations I had with Sam came through."

Unfortunately, this isn't the first time Malcolm & Marie received backlash. In January, Zendaya and Washington were criticized for their 12-year age gap, which the Greatest Showman actor addressed in an interview with E!'s Daily Pop. "I've played a 16-year-old since I was 16," she said, explaining how her Disney Channel past sometimes makes it difficult for people to see her as an adult. "It's hard for people to wrap around the idea that I am grown in real life."

Washington, for his part, addressed the age controversy in an interview with Variety, explaining that he learned a lot from Zendaya by working with her on the film. "People are going to see in this film how much of a woman she is," he said. "She has far more experience than I do in the industry I've only been in it for seven years, so I'm learning from her."