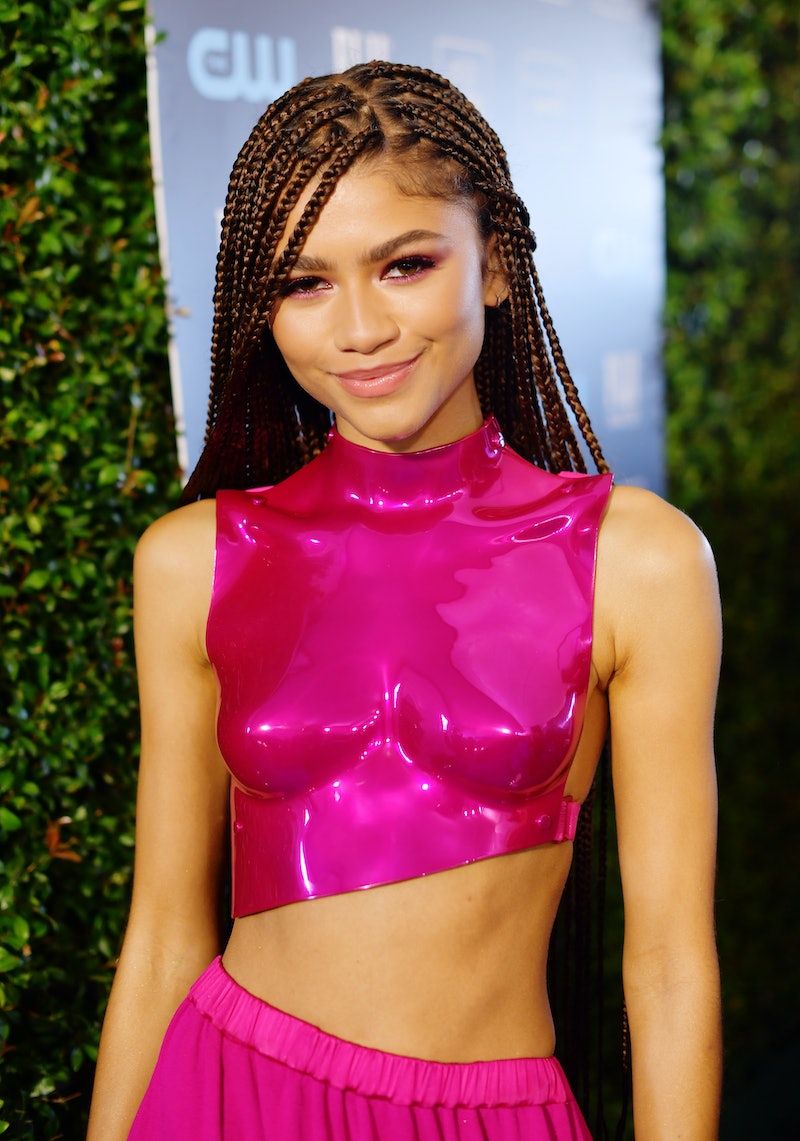 Despite taking on more mature roles in Euphoria and Malcolm & Marie, Zendaya wants to make it clear that she's not trying to distance herself from her child star persona. During a conversation with Carey Mulligan for Variety's annual Actors On Actors series, Zendaya revealed how she really feels about her "Disney kid" past, explaining that all of her previous roles helped shape her into the actor she is today.

Referring to her recent Emmy win, Mulligan said to Zendaya, "You surely can't think of yourself as a Disney kid now." However, the actor and singer refuted that idea, revealing that she is proud of her early roles on Shake It Up and K.C. Undercover. "The thing is, I am [a Disney kid]," Zendaya replied. "And to a degree, I am grateful for that. That's where I started, and I learned so much from that experience."

She continued, "I'm grateful that it's just kind of been this slow progression, and I am happy that it's all been to prove it to myself and not to anybody else, you know? I embrace it a little bit. It's part of my heritage to a degree." But while she embraces her time on the Disney Channel, Zendaya acknowledged that those early roles may have affected the way directors and audiences saw her before she landed the role of Rue on Euphoria.

"Before Euphoria, technically I was still on Disney Channel. I was a bit confused [about why I was cast] myself," she revealed, explaining that the show's creator Sam Levinson admitted that he always wanted her to play the part. "I think there's something to that kind of faith, [and him] already seeing something in me that I maybe knew was there, but I didn't have the opportunity to explore. ... To me, finding roles, it feels like falling in love. You feel connected to them and it's something unexplainable ... and that's what I felt with Rue and then with Marie."

As proud as she may be of her time working on Shake It Up and K.C. Undercover, Zendaya has admitted that her connection to Disney made her more ambitious. "I wanted to prove myself," she said during a Hollywood Reporter roundtable in June 2020. "Being a young Disney actor, that's one level, being a young Black woman is one level, and then being very hard on myself is another level. ... I want to do a good job, and sometimes that can cause you to be fearful of things."

Despite her concerns, Zendaya knew that she couldn't let the opportunity to play Rue pass. "I will say that there's something that happens when a special character comes along, for me at least, and those fears melt away. They don't come back until it starts airing, which is when I started to get a little scared again. But now, I'm excited to go back because the motivation is to work harder and become a better actress. I just want to get better."

And while she may have taken a more "gradual" approach to transitioning from child stardom to more mature roles, Zendaya doesn't judge her fellow Disney Channel stars for doing things differently. "It's important not to judge any other person's career or trajectory, because when you're a young actor you are growing up in front of the world," she told Vogue Australia in March 2020. "Sometimes that's not easy. Everybody has their own path. I think for me, I had a very clear vision of what I wanted to do."

More like this
'Abbott Elementary' Fans Probably Missed This 'Parent Trap' Easter Egg
By Sam Ramsden
At 28, Rosie Perez Risked Her Career To Stop Playing Stereotypes
By Gabrielle Bondi
At 28, Debra Jo Rupp Was Living A Much Different '70s Show
By Grace Wehniainen
Raven-Symoné Addressed Fan Pushback To Her Name's Actual Pronunciation
By Stephanie Topacio Long
Get Even More From Bustle — Sign Up For The Newsletter
From hair trends to relationship advice, our daily newsletter has everything you need to sound like a person who’s on TikTok, even if you aren’t.