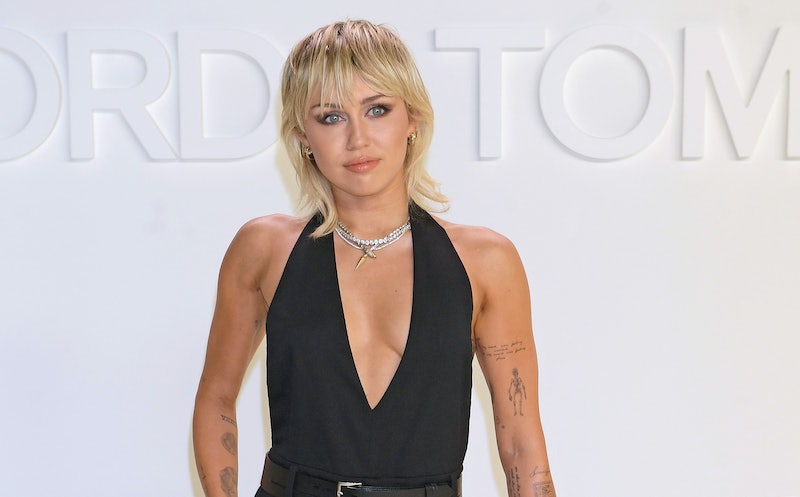 The basic premise of Hannah Montana — that normal teenager Miley Stewart is secretly a massive pop star hiding in plain sight thanks to a blonde wig — provided the show with plenty of comedic mishaps, but it also had a darker impact on the show's star. During a recent appearance on The Howard Stern Show, Miley Cyrus said playing Hannah Montana made her question her self-worth when she was young, especially because of the reaction that some fans had to the fictional music icon.

"Some of my audience was so attached to a character, which wasn't me," she explained to host Howard Stern. "So, then that does a lot of psychological stuff, where it's like, 'Am I valuable as myself?'" It wasn't just the character's popularity that made Cyrus question her worth; the show's entire plot made her feel like she was less important when she wasn't playing the role of Hannah.

"The whole show's premise was that when I had my normal hair and looked like myself, no one gave a sh*t about me," she continued, referring to how her character could live a normal life when she wasn't wearing Hannah's blonde wig. "And then when I got all dolled up and put a wig on, all of a sudden, you know, I'm being chased by people chasing my tour bus. That's a lot to put on a kid — to go, 'When you're yourself, no one gives a f*ck.'"

Wearing all of those wigs and costumes also affected the way Cyrus viewed herself. "When they go and kind of groom you to look like something else, something that you're not, and you're really young, and it's a lot of makeup and, you know, wigs and all this stuff, it does something psychologically," she said. The Plastic Hearts singer made it clear that she's "not mad about it," though. "I know how to lay down a wig like nobody else's business," she joked. "That I learned."

In a 2017 interview with CBS News, Cyrus explained that while she liked being a Disney Channel star at the time, she realized when she got older that starring on Hannah Montana took a psychological toll. "I think what was hard for me was balancing everything," she said, comparing the experience to TLC's Toddlers & Tiaras. "I think it got harder when I started touring as both — I toured as Hannah Montana and as myself. ... I mark that up to doing some extreme damage in my psyche as an adult person."

Still, Cyrus has a lot of positive memories from her Hannah Montana era. "I loved being that character," she said, adding that the series made such an impact on her young fans. "That was great music for kids to listen to," she continued. "There's a song called 'Life's What You Make It, so Let's Make It Rock.' Never forget that — wise words. That's a good thing to tell kids."

Furthermore, Cyrus isn't opposed to reprising the role at some point in the future. "[Hannah is] just in storage collecting dust and I'm ready to whip her out," she said on the radio show Carolina With Greg T In The Morning in August. "The opportunity will present itself. I definitely would like to resurrect her at some point."