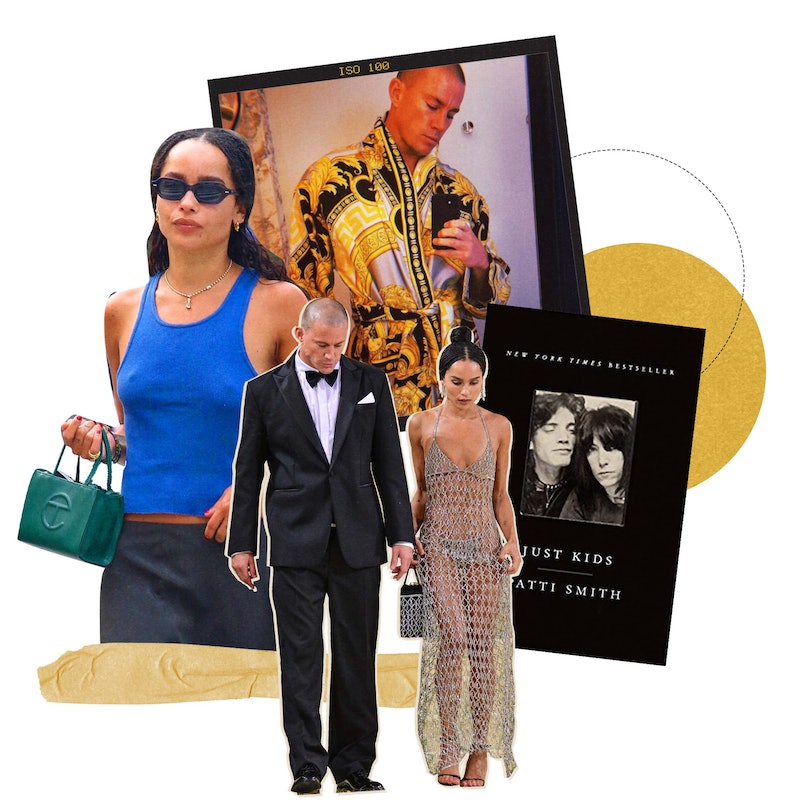 Channing Tatum is down bad. He should be — I would be too if I were dating Zoë Kravitz. Between the debut paparazzi photos of the new couple riding around on the Magic Mike star’s BMX bike and his hard pivot on Instagram from posting grainy photos of his horse and his motorcycles to posting about Patti Smith’s Just Kids on main, it's safe to say the Batman actress and ultimate cool girl has turned Tatum out.

When photos of the new couple first emerged this summer, I was terribly confused. This was not on my 2021 celebrity couples bingo card (though Shawn Mendes and Camila Cabello’s breakup was!). But after 10 minutes of careful consideration in which I revisited those photos of Channing Tatum walking in the 2003 Sean John runway show, I realized just how hot this hookup is, and therefore how justified Zoë is in remaking this man’s tastes in her own cool girl image. Though unexpected, it is legendary nonetheless. We all watched this scene from Magic Mike XXL. We see the vision, baby.

As more paparazzi shots emerged, I couldn’t help but wonder: maybe she’s just as down bad as he is? It feels hard to fathom considering the distinct slots they each occupy in pop culture. He is more a man of a moment (namely, Magic Mike fame) and she is, well, evergreen. And yet, the volume on these photos of the pair laughing in New York City is, frankly, astronomical. No one laughs like that unless they’re getting d*cked down. And Kravitz wasn’t just laughing — she was cracking up in that little Araks blue slip dress, head thrown back, manifesting date number 3. You cannot convince me I am wrong, because no white man has ever been that funny.

Still, Kravitz’s outsize influence in the relationship is clear. Before Zoë, (let’s call this era B.Z.), Tatum was writing a children’s book, occasionally dating Jessie J, being a himbo (respectfully), and posting low-res selfies and mouth-watering thirst traps. After Zoë, (A.Z.), he’s posting photos of his sculpture work on IG and sharing a text-based asset that reads, “Thank yourself for how far you’ve come. It hasn’t been easy” in what can only be described as redrum font. I haven’t seen this man so deep in his feelings since he discovered the astrology app The Pattern. (I wonder if any of his Pattern readings could have predicted this?). I’m not dragging him, I promise. I am proud of him. I am happy for him and Zoë. In fact, I would love to be invited over to, um, talk.

It’s very 2021 Bedstuy: a hot Black girl with no bra and overpriced boho braids with her arguably average-looking white boyfriend sitting there swooning over her.

Their aesthetic feels familiar in that I’ve seen a knock-off version of this couple before. Calling their look Dimes Square feels like a disservice specifically to Kravitz, but can you see the vision, right? It’s very 2021 Bedstuy: a hot Black girl with no bra and overpriced boho braids with her arguably average-looking white boyfriend sitting there swooning over her. Though yes, he is fine, she elevates his aesthetic. And as Tiffany Pollard once famously said, “Cute next to gorgeous... gorgeous is gonna, you know, devour cute.”

Zoë Kravitz has that effect on the men she dates. She was the real Serena in Penn Badgley’s life. Did most of us even know who Michael Fassbender was before she dated him? No. But I know we all watched Shame just to see what’s up. I must admit I still don’t know who her ex-husband is, but they did remind me of two beautiful, almost identical lesbians. Kravitz just always feels like one of those people who is too divine to date (men).

But alas, she is human, and hot, and deserving of good d*ck and a partner who is seconds away from updating his own Instagram account handle to @zoekravitzfan12. So I will step back, settle in, and let Channing learn the ways of an art hoe boyfriend. Channing Tatum is living proof that once a decent-looking white man smoothly goes bald, their options are limitless. Just ask Stanley Tucci or this guy.

More like this
At 28, Minnie Driver’s Personal Life Was “Falling Apart”
By Kate Dwyer
Nicola Coughlan Wants You To Appreciate Her "Indie Sleaze Era"
By L'Oréal Blackett and El Hunt
The Case For A Hard Launch Summer
By Morgan Sullivan
Harry Styles Addresses The Theory That His New Song "Daylight" Is About Taylor Swift
By Jake Viswanath
Get Even More From Bustle — Sign Up For The Newsletter