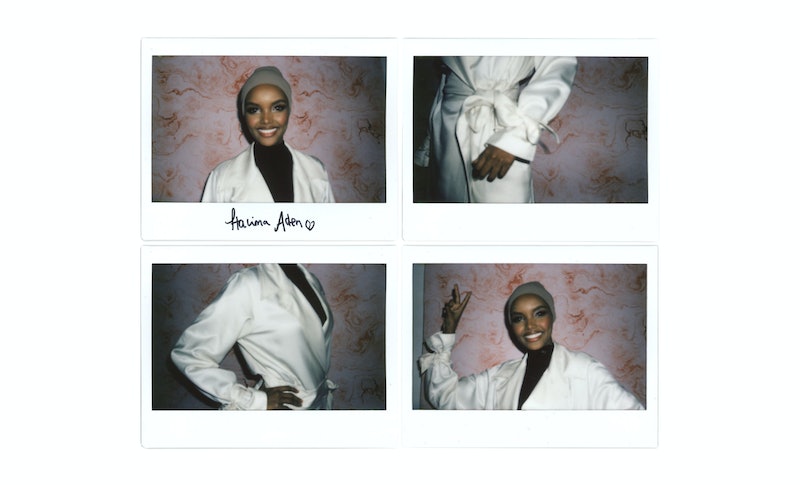 When celebrities hang out with Bustle editors, we want to give them the chance to leave their mark. Literally. So we hand them a pen, a piece of paper, a few questions, and ask them to get creative. The rest is up to them. This time, model Halima Aden is leaving her mark in the Bustle Booth.

When I first meet Halima Aden at the Bustle offices in New York City, I quickly notice that she's quite daring. The model is draped in a gorgeous, white Tory Burch Twill Wrap Dress, yet she's also fearlessly drinking an Earl Grey tea from an open cup. But somehow, not a single drop falls onto Aden's pristine outfit.

Making bold moves clearly works for her, but this mentality goes far beyond magically avoiding tea stains. At only 21-years-old, Aden has had a legendary amount of firsts, and they are all arguably a result of her abiding by her own set of rules. In 2016, for example, she went viral at the Miss Minnesota pageant, after she became the only individual in history to ever wear a hijab while competing. The following year, she was signed as IMG's first hijabi model. And now, Aden just made history once again as the first person to ever wear a burkini on the glossy pages of Sports Illustrated Swimsuit, available on newsstands now.

"It's so overwhelming, but in the most beautiful way," Aden tells me with a wide, glimmering smile, reflecting on her extraordinary career. "Just three years ago, there was not a single [signed] hijab-wearing model."

Aden's energy is naturally vivacious, but when she speaks of her professional success — especially the recent SI photos — it multiplies tenfold. "I never thought I could be a model," she says, remembering the time she spent living in a refugee camp in Kenya. "Growing up, we didn't have TV, we didn't have magazines — I saw UNICEF workers. For me, dreaming was like, 'I want to one day wear that UNICEF shirt or one day, I want to be a UN worker.' It was really hard to dream beyond that camp."

The juxtaposition of her journey makes it obvious to see why the model works as hard as she does, but she knows her success is not just a win for her. "It really resonates with the girls in my community," she shares. "I [still] get messages like, 'Oh, I didn't even know that it was a possibility to be a hijab-wearing model.'" But Aden's impact transcends how she looks — she relates to people even when it comes to topics like money. "I know what it's like to come from an impoverished area," she says. "People tell me, 'You inspired me to think it's not about where I came from.'"

Yet, for her Sports Illustrated debut, it was all about where she was born. While Aden shares that her burkini spread is the highlight of her career thus far, the fact that it was shot in her home country turned the already glorious experience into a beautiful full circle moment. It also helped her to see Kenya in a whole new light. "It was special," she muses. "We stayed in Watamu, at a beautiful beach resort town, which is a days travel from the refugee camp that I was born in — just such a contrast to where I grew up."

Aden knows the positive impact her decisions will have on the next generation as she continues to shatter the mold time and time again. That's exactly why she'll never back down when it comes to making bold moves as a model. "It's really about getting into those spaces that girls who look like me have never been in," she says. "They [now] have that opportunity to feel represented in fashion."