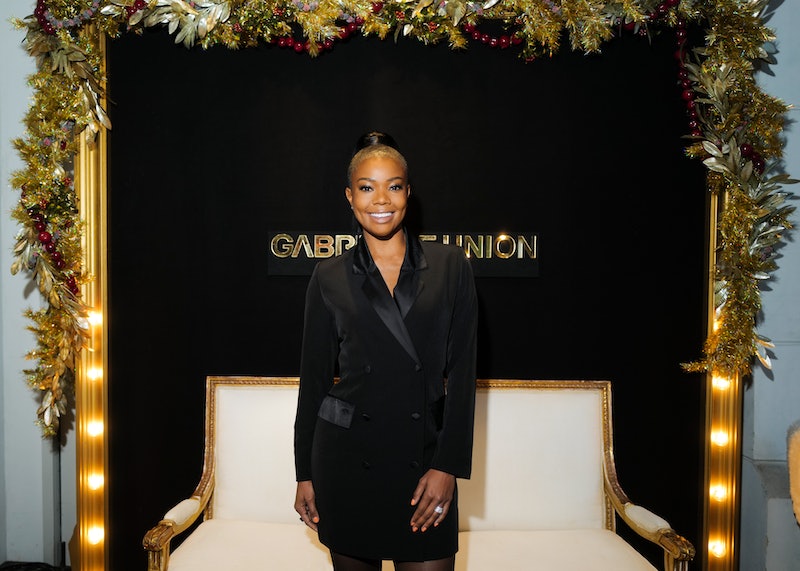 In an age of inclusion and diversity (or lack thereof), there’s a huge difference in talking the talk versus walking the walk. In her new role as a designer for New York and Co., Gabrielle Union-Wade is less afraid than ever to do the latter and speak up in the face of adversity. And she’s encouraging those who are often “othered” in their everyday spaces to not just have a seat at the table, but to build a dining room set all of their own.

The actor-turned-designer hosted an intimate brunch with New York & Co. on Dec. 16 where she spoke on the power of inclusion while celebrating her holiday collections with the fashion brand, as well as its plus size sister retailer Fashion to Figure. Amidst all the stuffed croissants and mimosas that were served at the brunch, Union-Wade’s conversation on becoming a leader in fashion and life was the most appetizing portion of the event. Speaking alongside HBFIT founder Hannah Bronfman, stylist Solange Franklin, model Ebonee Davis, and Plus Model Mag co-founder Maddy Jones, Union-Wade reflects on her own “debilitating fear” of growing up as the only Black person in a predominantly white space.

“You are all of these people’s example of ‘X’," she says to the crowd. “I’m everybody’s example of Blackness. I’m like ‘Oooh, that is a lot of responsibility’... but being the chip in the cookie, or always [being] in situations where you’re seeing things, you are experiencing things, and you are hearing things [as a minority], you are always presented with a choice.”

The choice Union-Wade describes is one of assimilation that marginalized folks are faced with on a daily basis. After her own personal experiences in her adolescence, Union-Wade explains how she often feared choosing to assimilate in toxic environments or risking it all to do the right thing. Once the actor started losing sleep over it, speaking up became a natural habit.

“It got to the point where I was like, 'that’s not right’,” she says, raising her voice. “I’m like ‘Okay, I’m still alive, I lost a couple of you [fans], but you’re mostly still here.’ And every time I would speak up and the world didn’t end and I knew that I was doing the right thing, it just made it so much easier.”

Though she may not be in my same tax bracket, Union-Wade’s idea of "getting the bag" is having peace of mind and to “cover us all” in terms of representation, and that now includes fashion in her new role as designer at New York and Co. There have been a lot of celebrity brand collaborations in 2019 that have included plus size people, but there are some cases where the plus size line falls flat in comparison to the straight size-only options.

Union-Wade made holiday collections for New York and Co. and Fashion To Figure. Though the collections aren't exactly identical, Vice President of Marketing and Customer Experience Marie Malette tells Bustle that the Fashion To Figure styles were strategically derived from Union-Wade's New York & Co. line. The crossover in designs are apparent and to Union-Wade, that's what makes a leader in inclusive fashion.

“It’s not enough to say ‘Oh, we’re offering extended sizing' — if it doesn’t fit right, it ain’t right,” Union-Wade says. “And that’s what it all came down to. How many more people can I cover well? So if you are hanging your hat on diversity and inclusion, but you’re omitting 67% of the population, you’re failing miserably. I don’t want to fail at anything miserably, so I have to get it right. I want the fit to be right, I want the fashion to be right. I got hip to things just today and I’m like ‘Ding! Already on it.’ Because once you know better and you don’t do better, you’re whack. I’m not interested in being whack.”

From standing her ground in a hostile work environment to styling fashionistas of all sizes, one thing's for sure — Union-Wade doesn't compromise her values. Once fighting for something means losing everything, that's when real change begins.

More like this
These Artists Are Reimagining Black History Month To Create A Better Future
By Katie Mitchell
24 History-Making Black Women You Probably Didn't Learn About In School
By Ayana Lage and JR Thorpe
19 Instagram Captions For Celebrating Black History Month
By Ayana Lage
Hailee Kaleem Wright's Topsy-Turvy Path From MTV To Broadway
By Samantha Leach
Get Even More From Bustle — Sign Up For The Newsletter
From hair trends to relationship advice, our daily newsletter has everything you need to sound like a person who’s on TikTok, even if you aren’t.