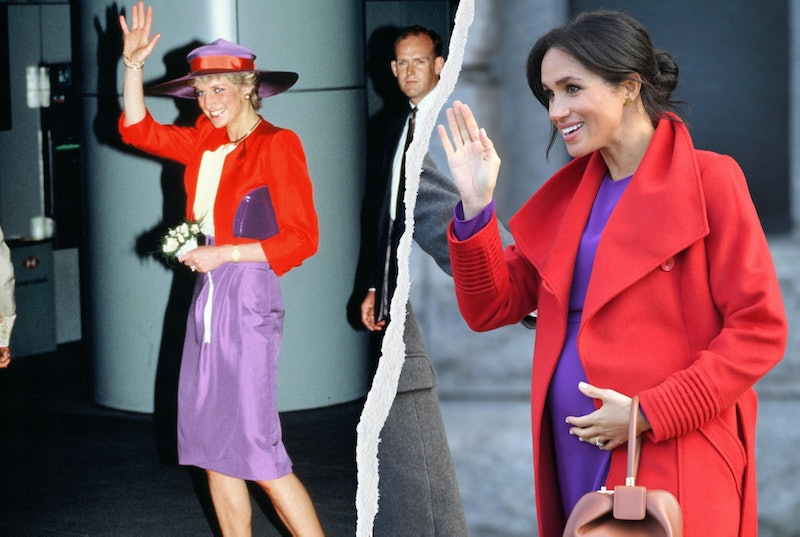 As one of the most photographed women in the world, Princess Diana’s style has provided inspiration for decades. You don’t need to look far to see her impact on designers, celebrities, and even members of the royal family. The Duchess of Cambridge has chosen a number of looks evidently inspired by her late mother-in-law over the years, none more so than the blue polka-dot dress worn as she introduced Prince George to the world on the steps of the Lindo Wing in 2013. Slightly less clear-cut, although just as numerous, are the times Meghan Markle dressed like Princess Diana.

Princess Diana was considered a royal rebel in the style department, and Markle has many times followed in her footsteps by putting her own spin on royal style. From off-the-shoulder dresses to two-piece looks for evening events, both Markle and Diana chose to take a freer and more modern approach to their official wardrobe.

Markle's spirited approach to royal dressing is the only similarity to Princess Diana’s style. As her royal duties are starting to wind down, Markle chose a bright green dress from Emilia Wickstead, for Commonwealth Day, which mirrored that of Princess Diana’s green shirt dress and tulle-bowed hat for the 1982 Trooping of the Colour. For the Mountbatten Festival of Music at Royal Albert Hall, Markle opted for a bright scarlet-red caped gown by Safiyaa with red accessories to match, in the same hue as Princess Diana’s Jacques Azagury dress and matching accessories, worn to an American Red Cross fundraising dinner in June 1997.

Following the Duke and Duchess of Sussex's last outing as official Royals, it remains to be seen exactly what her post-royal wardrobe will look like. Until then, here are all the times that Meghan Markle channelled Princess Diana over the years.

More like this
Harry Styles' New Gucci Collab Is Serving Woodland Chic
By El Hunt
You Can Buy Margot Robbie's 'Barbie' Roller Skates Now
By El Hunt
5 Best Buys From The 'Euphoria'-Approved ASOS x Adidas Collab
By El Hunt and Bustle Editors
The Secret To Taylor Swift’s Fringe, According To The Experts
By Orla Pentelow
Get The Very Best Of Bustle/UK

This article was originally published on March 28, 2020