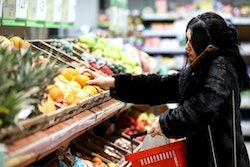 I grew up in a house where it was completely normal to slice the green fuzz off a block of cheese, then continue making your sandwich with it. But when I went to college, several of my friends found my nonchalance about expiration dates a bit alarming. Despite what people may think, however, there are foods you can eat past the expiration dates on their labels.

Expiration dates aren't always accurate representations of a food's shelf life, and those labels have been linked to a massive amount of food waste every year. “Household food waste accounts for 40% of all food waste in the U.S., and we estimate that 20% of household food waste is due to confusion over date labels,” JoAnne Berkenkamp, Natural Resources Defense Council senior advocate, told The Wall Street Journal in 2019. With over 40 million Americans potentially facing hunger, according to the USDA, it's startling to think that so much food is getting thrown away due to misinformation. Of course you don't want to eat something that's unsafe or could make you sick, but you can save money and reduce waste if you stop living by the date you see stamped on your yogurt cartons.

Most people don't understand expiration dates or what they really mean. The common misconception is that once the sell-by date on an item has passed, the food becomes inedible, but that isn't always the case. Food products are actually labeled with expiration dates to give consumers information about the food's freshness. In other words, most foods don't "go bad" or become unhealthy to eat when they've reached their sell-by dates, but they will start to lose quality in taste.

That being said, there are exceptions: Maya Feller, MS, RD, CDN, a registered dietician and nutritionist based in Brooklyn, tells Bustle, "As a rule of thumb, anyone with a compromised immune system should not eat food after the best by dates especially if it is visibly spoiled or foul-smelling." Additionally, she advises against ever eating meat, poultry, or seafood past its expiration date.

When it comes to eating other foods that are expired according to their labels, though, the most important thing to do is use your common sense. If an item smells terrible or has deep cuts and holes, Feller suggests composting it instead of taking a chance on eating it. The same goes for if the item's texture, consistency, or color has changed. Basically, never consume something you're unsure of. Still, there are plenty of foods that are safe long after their sell-by dates, as long as they don't display any of those signs.

Maybe you aren't the type to eat around the mold, but here are 10 things you can safely eat past their expiration dates, assuming they look and smell normal:

If you think about how cheese is made and aged, you might be more apt to believe it's the kind of food that doesn't always go bad after its expiration date. Even if there is a little mold growing, consuming "expired" cheese can be safe — as long as you cut off the mold and it still smells alright. For example, New York cheesemonger Rachel Freier told Thrillist that semi-hard and semi-soft cheeses can stay good two to four weeks past the expiration date. However, she suggests being a little more careful with soft cheeses that hold greater amounts of moisture.

While it may begin to get a little stale, cereal has a true shelf life long beyond its printed expiration date. Like many foods, if it is stored properly — in this case, in a cool, dry place — cereal can last months after the sell-by date. Dietician and author Sharon Palmer, RDN, told TODAY Food in 2018 that cereals with more fat content (think nuts and oils) could go bad more quickly, though. In other words, you might want to try some before pouring yourself a whole bowl if it's expired.

Although dry pasta already has a one-to-two-year shelf life, it can actually last much longer than that, because it doesn't contain any water. As long as it is stored in a cool, dry place, dried pasta can actually last up to three years, according to the Food Network. Fresh pasta, on the other hand, does contain water and spoils more easily, so you should do a smell test.

It might get stale, but bread past its expiration date can be safely eaten. If the bread smells sour or spoiled, though, definitely don't eat it. That being said, bread that's turned a little stale and crunchy makes excellent French toast and croutons, so don't toss it out because it's "too old."

Say goodbye to days of throwing out your half-eaten tub of yogurt, because this is another dairy product you can eat after its package labels it "expired." Open yogurt will spoil sooner than unopened yogurt, but sealed yogurt will usually last one to two weeks past the sell-by date. “I am comfortable eating yogurt 1-2 weeks past date as long as it doesn’t smell,” Dr. Jennifer Quinlan, food microbiologist and associate professor in the Department of Nutrition Sciences at Drexel University, told NBC News in 2018. When it comes to yogurt, you just have to ask: Does it smell right? Is there mold in it? If not, then feel free to proceed with making your smoothie.

Like bread, potato chips may get stale past their expiration date, but they are still perfectly safe to eat. If they are in an open bag, they'll be alright until you decide the texture is too much to handle, but if the bag is sealed, it can still be good months later ... as if you'd have an uneaten bag of chips laying around for that long.

You know that white film that forms on old chocolate? It's not mold. It's what's called "chocolate bloom" — either of the fat or sugar variety — and it can be safe to eat. If chocolate is stored in a cool place (70 degrees or below), it will outlast its sell-by date. But as with chips, what are the chances you'll have chocolate for more than, like, five minutes?

I used to loathe spending so much money on condiments like ketchup, mayo, and jam, because I could never seem to use it all before it expired. That changed when I found out that many condiments, including salad dressing, are consumable after their sell-by dates. "If you are healthy and don't have a sensitive stomach, you may be able to tolerate ketchup beyond the best by date," Feller says.

If you don't mind freezer burn, then frozen foods can be eaten long after their expiration dates. Freezing food is the easiest way to extend its shelf life, whether it be vegetables or pastries. Go ahead and stock up on frozen pizza. You know you want to.

A little bruised cucumber or wilted lettuce shouldn't hurt you (as long as it smells fine), and neither should bagged salad eaten past its expiration date. When it comes to fruits and vegetables, it's simple: If it's rotten, don't eat it. And if it's just a little wilted, you could always cook it instead.