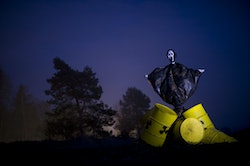 I’m the first to admit that I’m a bit of a scaredy-cat. I’m easily scared, but I can appreciate a good prank — especially scary Halloween pranks. People are probably already a bit on edge around Halloween time because of all the ghostly, ghouly, and superstitions, so it shouldn’t be hard to pull one over on your family and friends.

While the Coronavirus pandemic has put a bit of a damper on holiday plans, it doesn’t have to make your pranks fall flat. The trick to a good prank is to scare or trick people, but not in a mean or disrespectful way. April Fool's is a good example of how “pranks” can get out of hand. In my opinion, a prank is not saying someone is dead or pregnant or getting divorced, and then turning around and going “psyche, gotcha!” A real prank is supposed to give someone a momentary fright attack before they can have a good laugh about it. Because that’s the true nature of pranks — to eventually make people laugh. So just be mindful when you’re planning this year’s set of Halloween pranks. They’re supposed to be both scary and funny!

Any of these Halloween pranks would work to give me a good jump and a yelp, and luckily, most of them are pretty easy to put together. Happy scaring!

We’ve all drawn a smiley face on a fogged up mirror, right? For Halloween, you’ll need to be a bit trickier to really scare someone. Before your significant other/roommate/sibling pops in the shower, use a bit of soap to write a creepy message on the mirror — such as “I’m watching you” or “I know what you did.” Use a bit of tissue to retrace the words, so that your message isn’t totally visible yet. Once the mirror is fogged, it should become clear. Just listen for the yelp of panic.

I had a neighbor growing up who had a giant scarecrow decoration that used to sit in the rocking chair on his front porch on Halloween. Throughout the night, he would periodically replace the scarecrow and subsequently frighten the living daylights out of kids like me. You can dress as a scarecrow, movie murderer, a witch — really anything that looks just fake enough to draw people in.

If you’re at the office on Halloween or living someplace with movable ceiling tiles, this prank is for you. All you need is a long hair extension or wig to tuck inside a ceiling tile so that it hangs down ominously. For added effect, make the hair look a little worse for wear, maybe even putting some fake blood on it, and hang it in a room people will have to flip the lights on in. The long hair reminds me of the girl from The Ring — even scarier.

This one takes a bit of work, but it’s so, so worth it. Basically, take a photo of yourself looking a bit squished, have it printed and laminated, and then stick it in a large jar filled with sickly looking food coloring. Place it in your fridge, and wait for hungry guests to get a scare.

I know that after a long night of Halloween celebrations, all I want to do is fall into bed and snuggle up. So imagine the terror your loved ones would feel when they pull back the covers and see a bunch of bugs have taken up residence? Fake bugs, of course, but they’ll be freaked out either way.

If you’re hosting a Halloween party, this is a good one for you. Personally, I’m terrified of snakes, so if I were to open a cooler to grab a beer and a snake jumped out at me… well, I’d probably need a minute to stop crying. Use a rubber snake and some string to rig the snake to pop up whenever the cooler is opened for added realism, or simply place it in there for people to jump at.

This one is a bit mean — unless you know someone who really enjoys onions. The trick is to make a bunch of onions look like caramel apples, so that unsuspecting partygoers get a mouthful of yuck instead of a delicious Halloween treat. You make the onions as you would apples, and you should actually include a few real apples so the people with onions don’t catch on right away.

If you’re strapped for time, you can get a product that does the prank for you. I’m sure you’ve seen the candy bowls with the animated hands — it never really gets old watching little kids or unsuspecting adults jump when they reach in for a candy only to be swatted by a zombie hand.

Honestly, any prank involving spiders — big ones, small ones, whatever — will scare most people. You can put a fake spider in someone’s car just above the door so they’re bound to notice it. You could rig a giant spider to swing down from the ceiling when kids come to your door. You could even go the extra mile to get a remote controlled spider to follow your party guests around.

Like spiders, creepy dolls will frighten most people. You can buy an already scary looking baby doll — this one is sound and sensor operated — or you could make your own out of a thrift store find. When no one is around, write something creepy on a notepad and place the marker in the doll’s hand. When people come back around, they’ll probably stay clear of the doll for the rest of the party.

Now this is the prank to end all pranks, because it’s pretty elaborate. Have a friend dress up in some spooky attire — you know, tattered clothes, matted hair, ghostly makeup — and have them hang out in a few spots along your street so that people coming to your house will see them. Spark up a conversation if no one brings it up, and then act like your friends are joking with you. Ask them to describe what they saw and then tell them a fake story about how someone died in the neighborhood and is said to come out on Halloween. Have your ghost friend show up later to scare them!

As millennials, nothing is scarier than when our electronics show signs of going bad so why not double down on the scaries and freak out your virtual party goers with a fake computer glitch? A “Blue Screen Of Death” or freaky matrix-look? It doesn’t take much to send your guests into a tailspin, thinking their electronics have crumbled. Find your favorite glitch, send the link and watch the chaos unfold in the Zoom party.

The music always sets the scene! Play with the minds of your virtual party goers by having spooky music playing in the background. Mix it up by starting and stopping the music at random times so no one is quite sure where it's coming from!

It’s no secret that everyone is looking at your background during a Zoom call. Pictures of you friends and family? So 2019. Give your friends a reason to doubletake with these scary changing portraits. Spice it up with some acting skills. Is the portrait really changing or are your virtual guests glitching?

15. Have An Eye-Opening Experience

This prank can get pretty gruesome but if it fits your audience then eye would go for it! It can be done with pretty much any object that's believable to accidentally get stabbed in the eye with -- just be sure to not actually stab yourself in the eye.

This article was originally published on Oct. 18, 2015