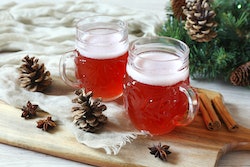 Move aside pumpkin spice lattes — apple cider reigns as the beverage for the fall and winter seasons. You can have it hot or cold, or even make it into donuts. It's like apple juice, but fancy. You can even add it to a cocktail for an easy and delicious fall beverage. If you're wondering which alcohol goes best with apple cider, wonder no longer and prepare to have a new favorite happy hour drink.

It's hard to pinpoint just how apple cider is different from regular old apple juice. Apple cider tends to be richer and combined with more autumnal spices. However, there isn’t a, like, legal standard on the difference between apple cider and apple juice, which is why many brands use the names interchangeably for marketing purposes. Fresh apple cider is usually raw apple juice that hasn’t gone through a filtration system to remove the pulp and other sediment from the apple, hence a richer texture. Apple cider can be unpasteurized, unlike apple juice, which is typically pasteurized to prevent fermentation and to prevent spoilage.

One thing’s for sure: You’re probably not about to make a very adult beverage with your little cousin’s juice box. That’s where cider comes in. If you’re looking to up your apple cider game, adding a splash of alcohol is an easy place to start. Here are 10 of the best alcohols to pair with your favorite winter beverage.

American rye whiskey, which is distilled from at least 51% rye, gives this apple cider cocktail a nice, slow and spicy burn. Flavored whiskies may also be worth a shot. “Adding cinnamon whiskey is a great way to spike your apple cider this season,” Camille Wilson, a cocktail expert who writes The Cocktail Snob, tells Bustle. Try this Apple Cider Whiskey Smash from Baked by Rachel.

“If your apple cider is on the dry side, I recommend spiking it with a full-bodied dark rum,” cocktail connoisseur and travel blogger Joanna Lin tells Bustle. She recommends something like Zacapa No. 23, because of its notes of vanilla, dried fruit and toasted almonds, and recommends that you look for rums distilled from raw sugar cane rather than molasses, to give your spiked apple cider that extra sweet punch. This hot apple cider rum punch from Brown Eyed Baker is just what the doctor ordered on cold winter nights, flavored with ginger, cinnamon sticks, and orange slices.

A traditional shandy is made with beer and lemonade, ginger beer, or ginger ale. This Apple Cider Shandy from TODAY combines sparkling apple cider and beer for an easy drink.

If you think margaritas are only for summertime sipping, you've been missing out on How Sweet Eats' apple cider margaritas. It's time to replenish your tequila stock.

Scotch is a malt or grain whiskey that must be aged at least three years in oak barrels to be legally labeled as Scotch whiskey. This smoky Scotch + cider cocktail from Gastronom with a hint of lemon is a nice libation to enjoy when coming back in from the cold.

Apple Cider Mimosas, like this one from Good Morning America, combine two delicious drinks into one: apple cider and champagne.

Mezcal, tequila's smokier cousin that is also made from the agave plant, pairs nicely with sweet and spicy apple cider. “It’s great for large format cocktails such as apple cider because the smoke is just subtle enough to enhance the cocktail without overpowering it,” Lin says. She’s partial to Mezcal El Silencio Espadín herself. Try this Smoky Harvest Apple Cider from Half Baked Harvest and see for yourself.

Traditional hot toddies, made with water, lemon, honey, and bourbon, were once thought to help cure cold and flu symptoms. While a hot toddy isn’t the cure-all you seek, add apple cider and you have the perfect antidote for all your winter blues. “My favorite spiked apple cider recipe has about two ounces of bourbon that I top with five or six ounces of apple cider over ice,” Wilson says. “I sometimes add a splash of ginger beer when I'm in the mood for something bubbly.” Try this gingery-appley hot toddy recipe from A Cozy Kitchen.

If you thought Cognac was only for your grandfather, think again. This spirit made from brandy is a great accent to a cold-weather inspired sangria. Try this sparkling apple cider sangria from The Kitchn for your next socially-distanced happy hour.

Hooch, white lightning — Moonshine has taken a list of names throughout the years to protect its brewers. The history of moonshine is extensive, and today, brewers are reviving the once illicit spirit. Serve this apple pie moonshine cocktail from The Little Epicurean with a history lesson.

This article was originally published on Jan. 5, 2016