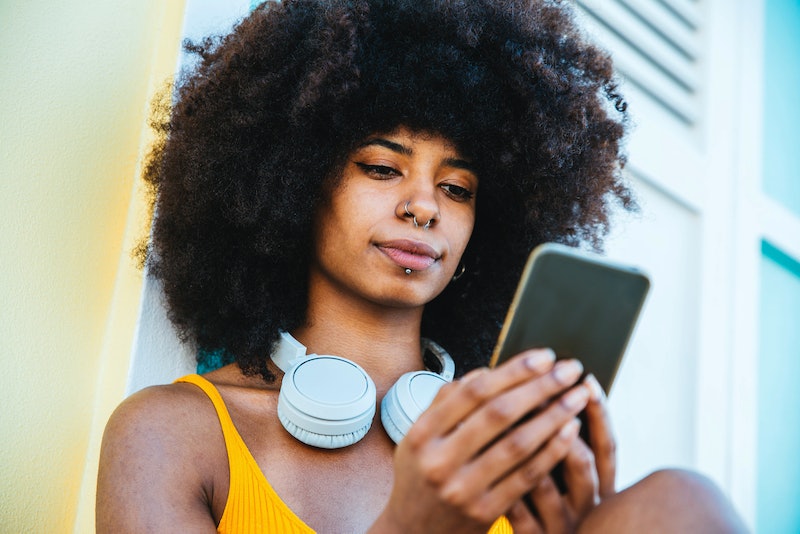 Thanks to modern technology, a bunch of creative minds, and the rise of a smartphone-dominated world, we can now communicate with tiny little pictures on our phones that manage to convey whole worlds of meaning. Take, for example, the upside down face emoji: As it turns out, there are a ton of ways to use the upside down face emoji that you wouldn't expect. In a world where we do so much communicating through images, the words we assign to those images become even more plentiful — and thinking up new ways to use each one is part of the fun.

In case you need a quick refresher on the upside down face emoji, it was introduced to us way back in October 2015 with the iOS 9.1 update (major throwback), joining the ranks of other important emoji, including the taco, burrito, cheese block, and the the nerd face. At first, many people were confused about how to use the upside down face emoji; unlike the cheese block or nerd face, it doesn't have an explicit meaning. In my opinion, though, that just makes it more fun. When an emoji has a vague meaning that may be open to interpretation, there are no limits to the imagination — and from there, true linguistic masterpieces are born.

That being said, let's take a look at some different ways you can effectively use the upside down face emoji:

Emojipedia suggests that the upside down face emoji should be used to represent silliness so when you feel goofy or are trying to depict someone or something that is goofy itself, it's a great addition to throw into a text.

3. If You're Literally Upside Down

Of course, there's always a literal side to everything. If you actually know a levitating man in a business suit, you could use that one literally; a person who doesn't have much of a mouth and always looks surprised might be depicted literally, too. If you're a gymnast or in the acrobat, perhaps you spend more time being upside down than the rest of us, so it seems fair that this emoji might be useful for you in that way.

4. When You Want To Express Looking Up

If you think about it, the upside down smiley face could also be a person craning their neck up to look at something tall. Totally skews your perspective, doesn't it?

For me, the upside down face emoji has become a sign of distress. I use it to indicate the emotion we all know too well — totally calm and collected on the outside, but breaking slowly on the inside. The above text is something that happened to me in real life, in case you were wondering how my life is going.

6. When You Feel Awkward

There are a ton of emojis you can use whenever you feel awkward, but think about it: The upside down emoji has no definitive meaning; it’s awkward in itself, making it the perfect emoji to use in any awk-o sitch.

Now, don’t confuse “salty” for “sarcastic.” They are two totally different things. According to Urban Dictionary, “salty” is “the act of being upset, angry, or bitter as result of being made fun of or embarrassed. Also a characteristic of a person who feels out of place or is feeling attacked." Whereas, sarcasm can either be condescending or funny. So, if you feel like acting "salty" toward your S.O. for not doing the laundry or taking the trash out, feel free to use the upside down smiley face.

8. When You’ve Maxed Yourself Out

You know those times where it seems as though there are not enough hours in the day, yet you still manage to finish a million tasks and then some? Yes, you’re superhuman, but you can also use the upside down smiley face to describe your day perfectly.

9. When You Need Something To Say

And when in doubt, if you have nothing to say, or just want to end a text spontaneously, throw in the upside down smiley face.