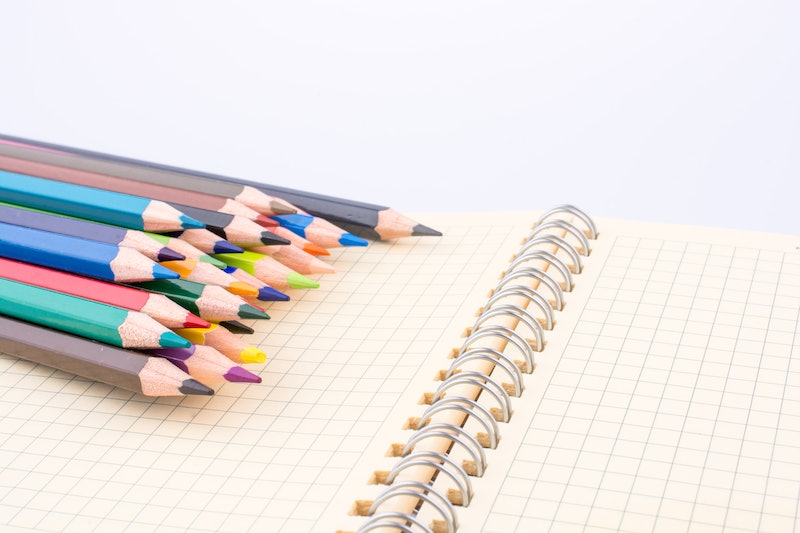 Bustle readers, I want you to close your eyes and think back to a time long ago. A time that's now only talked about in history books and around campfires. A time... when school was actually fun. There was a name for this era: the '90s. There are so many things that I genuinely miss about school in the '90s — a point in our lives when playtime was encouraged and make-believe was mandatory. This was before life got complicated, when the biggest dilemma was choosing between Lunchables or Bagel Bites.

Sure, it had its boring points, but so often, school in the '90s felt like its own little adventure. From the morning bus ride to art class to field trips (oh boy, oh boy!), they kept our active, hyper minds stimulated with all sorts of excitement. We played cool instruments, we sculpted clay pots, we sang the national anthem and were rewarded with stickers when we were extra enthusiastic. Those were the days — am I right?

Don't let anything dull the spark of the child in you. If you need a little refresher of some of the things that made school in the '90s so dang awesome, how about these?

Bill Nye and The Magic School Bus were just two '90s school favorites. I mean, how excited did you get whenever you saw Bill's giant rotating head on the TV screen? There was a very select list of things that actually made learning fun, and these guys were at the very top.

2. The Vast Array Of Writing Tools

Pop-a-point pencils, scented markers, gel pens, gummy pencil grips, those giant pencils that were almost too heavy to hold — the possibilities were endless. They brought joy to learning cursive and packed English class with lots of giggles and fun times.

Remember calculators? You felt like you held the world in the palm of your hand. But this magical tool wasn't complete until you covered it in stickers and then used them to spell dirty words.

The iconic bursting rainbow of color graced you with its appearance all over your folders, pencils, binders, notebooks, and erasers. And you'll never forget that one time your mom tried to hand you a boring black notebook, and you were all, "As if, Mom."

They were so fun to open and close and shuffle through. Never mind the fact that you really didn't need one.

Back in the Stone Age, we wrote notes by hand on lined paper and passed them across the room under the desk. Sometimes, the class bully would intercept and hold it hostage. Now we just have texting, which is awesome but simultaneously sucks the fun out of '90s gossip.

7. Falling Asleep As Soon As The Overhead Projector Went On

A dark room. Tired students. Honestly, what did Mr. Finkleberry think was going to happen? Did he really think you'd all be interested in learning about scatter plots?

8. Your Themed Lunchbox With The Matching Thermos

These were so dope. Sure, your My Little Pony plastic lunchbox was totally cool on its own. But when you whipped out that coordinating thermos... a hush fell over the cafeteria.

Do kids still do this? Is everything digital now? Listen, don't pay attention to what anyone says. The only reason you had books in the first place was to wrap them in paper grocery bags and then doodle on them with scented markers. If anyone tells you otherwise, then you don't need people like that in your life.

SCORE. Gym class was on point when you walked in and saw one of these bad boys. Could life get any better? No. The answer is no.

11. Predicting Your Friends’ Futures With M.A.S.H.

You definitely had a dedicated notebook to play M.A.S.H. with during recess time. I can’t lie — after being reminded of this classic fortune teller game, I just had to play it again. Spoiler: I am going to be a movie star living in my parent’s basement. Hey, I’ll take it.

12. Making “Cootie Catchers” When You Had Free Time

If you were, like, really into fortune teller “cootie catchers,” then it makes total sense why you know all of the zodiac compatibilities today.

Are these still around and happening?! You knew when the Scholastic book store was coming up, you were going to walk away with some pretty cool loot. And, if you’re anything like me, you begged your mom for $10 only to walk away with a couple of gel pens and fun erasers, not a book.

If your notebook wasn’t covered in superman S’s, were you really a ‘90s kid? I mean, how else were you supposed to decorate your notebook?

RIP to the original WordArt gallery. When it was your day of the week in the computer lab, you bet you were looking through the awesome WordArt fonts, because how on earth were you supposed to decorate your PowerPoint?

If you finished your PowerPoint, and already decorated it with the coolest fonts from WordArt, you completed your tasks for the day. So, what else were you going to do other than play Cool Math Games? If your teacher walked by, you had to remind her that it was educational.

You never had an issue with a dull pencil thanks to these stacking point pencils. Well, of course unless you lost one of these pieces. In that case, the entire pencil was garbage and you had a headache from looking for the missing piece.

More like this
When Did Tamagotchi Come Out? In The U.S., 25 Years Ago
By Kaitlyn Wylde
Cameron Diaz Just Recreated *That* Iconic 'There’s Something About Mary' Scene
By Rachel Mantock
Hayden Panettiere Will Return For 'Scream 6': "We F*cking Won, Scream Fam"
By Jack Irvin and Jake Viswanath
The Most Extra Party Girl Beauty Looks From The Early 2000s
By Paris Giles
Get Even More From Bustle — Sign Up For The Newsletter

This article was originally published on July 26, 2016