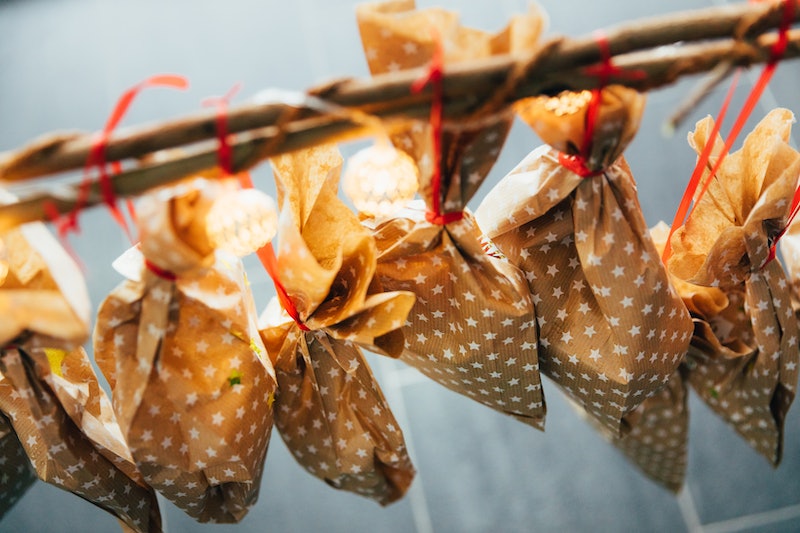 It's a truth universally acknowledged that the internet likes to argue about things, particularly when it comes to the holidays. Are marshmallows chaotic evil or chaotic good on sweet potato pie? Sour cream or applesauce for latkes? Advent calendars are just another one of those divisive holiday debates. If you're the type to mark the days in December with small gifts or miniature jam jars, you might think you know all about advent calendars, but your cousin might have a completely different approach to them than you. How one starts an advent calendar has pretty much two options, and there are die-hard adherents to each method.

What Is An Advent Calendar, Anyway?

Just so everyone's on the same holiday page, an advent calendar is a treat-filled way of marking off the days leading up to Christmas. Each number (and a corresponding candy or another little trinket) represents a day in December — yet another day closer to Santa Claus coming to town. But the question no one at your family dinner can seem to answer is whether you're supposed to start with the first box and work your way towards the highest number, or if you should see the boxes as a countdown and work your way backward. Should you eat advent candies by counting down, starting at 24 at the beginning of the month and New Year’s Eve-ing it all the way down to one right before Christmas? Or should the numbers of the advent calendar go along with the days of the month, and starting at one and counting up to 24 until, behold, tomorrow's Christmas?

Where Did Advent Calendars Come From?

To get to the bottom of whether advent calendars are supposed to count up or down to Christmas, you've got to investigate the history. According to the German company Sellmer Advents-Kallender, advent calendars date back to the 19th century, when religious Protestant families would mark their doors in chalk each December day to count up to Christmas. Families could use candles instead of chalk lines until (Christmas legend goes), someone combined the drawing and candle practice. The creator of the first documented, printed advent calendar, Gerhard Lang, reportedly got the idea from his mother, who'd made him little candles stuck to cardboard to mark his count up to Christmas when he was a child. As an adult, he seems to have taken that idea and run with it, publishing manufactured versions made in the printing office where he worked. As tends to happen, the holiday industry caught up, and now we have the abundance of mass-produced calendar options that greet every December today.

What's The Right Way To Use An Advent Calendar?

If you're trying to one-up your know-it-all uncle next time he tries to tell everyone how to proceed with their advent calendar, you've got history on your side now. Using the historical context, it seems that the proper way to work through an advent calendar is starting with the box labeled "one." The point of the calendar is not to count down, but rather to count up towards the days before Christmas. Think about it this way: if you were going to use good old-fashioned chalk marks or candles for your advent calendar, you'd want to end up with 24 marks or candles, not one. So, work your way up through your print calendar as well — and enjoy the little prizes along the way.

More like this
25 Quotes About Love To Share During Pride Month 2022
By Madeleine Aggeler and Emma Garza
Is TikTok’s “Villain Era” Trend Just An Excuse For Bad Behaviour?
By Chanté Joseph
An Honest Review Of The TikTok-Famous WalkingPad
By Kaitlyn Wylde
The Case For A Hard Launch Summer
By Morgan Sullivan
Get Even More From Bustle — Sign Up For The Newsletter

This article was originally published on November 28, 2016