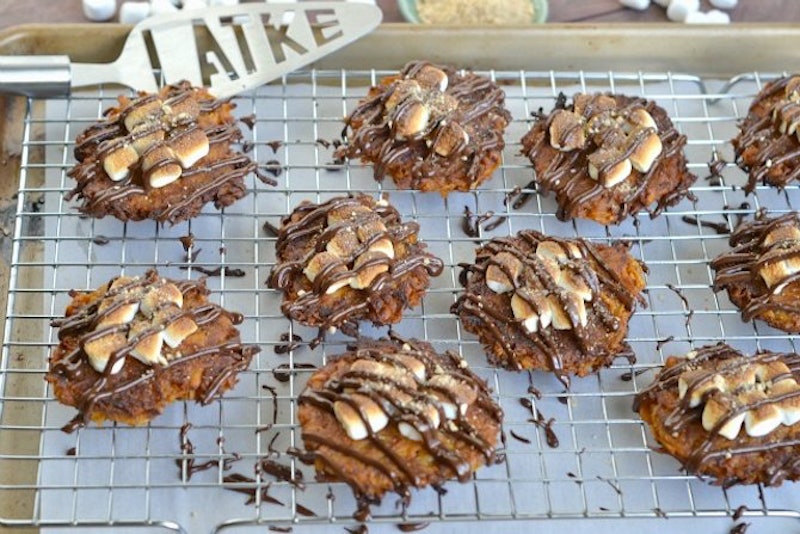 If you celebrate Hanukkah, there's a good chance you know all about amazing Hanukkah latke recipes. Also known as potato pancakes, they are traditionally eaten during this time of the year. Don’t celebrate the holiday? That doesn't mean you can't get in on the crispy goodness. In fact, I totally encourage you to dive into the world of latkes. It's one beautiful place.

If you’re not the cooking type, don’t fret. Latkes are extremely easy to make with basic kitchen skills and ingredients. There is even a good chance that you already have all the ingredients in your pantry. The awesome part is that you can tweak latke recipes to your liking. Basically, every version requires you to mix, fry, and eat. Once in a while, you may have to top it off with some kind of wonderful sauce. Count me in.

While traditional latkes are darn delicious, I couldn't let the holiday come and go without sharing a couple next-level versions. I’m especially loving the recipes that bring in those familiar seasonal flavors such as sweet potatoes and apples. Drool.

Because latkes can be savory or sweet, there’s something for everyone on this list. Good luck trying to pick which one to try first — you’ll need it.

Since I take my food very seriously, I'm diving straight into the mind-blowing latke recipe of all latkes. And if this gorgeous batch of rainbow latkes doesn't blow your mind, I can't trust you.

Made with precisely zero drops of food coloring, these rainbow latkes taste as good as they look. Each one is made with a healthy dose of veggies, topped off with a coordinating fruit jam. We're talking about everything from beets to purple cauliflower. Brilliant.

To trick your folks into eating your cooking, follow What Jew Wanna Eats' directions.

Seafood lovers, I've got the recipe for you. This latke recipe incorporates delicious smoked salmon right into the mixture, giving you an extra dose of flavor in every bite. It's the easiest way to give your latkes a major upgrade. The recipe even includes instructions on how to make lemon and caper sour cream. Oh, you fancy, huh?

Made with sweet potatoes instead of white, this savory dish is all about those seasonal flavors. This is an ideal alternative to all the mashed sweet potatoes and pie from Thanksgiving. Not that anyone could ever get sick of those.

Learn how to make them with Heather Cristo.

Once you've had your fill of wonderfully simple sweet potato latkes, bring some zucchini into the mix. It's yet another way to eat your vegetables... the cool way. This recipe also uses a dash of cumin, which is sure to add some major flavor.

Head to I Breathe I'm Hungry for the complete recipe.

Craving a latke but want something a little (or a lot) different? Try these pancakes made with carrots and apples. These babies will be bursting with tons of natural sweetness. Made with cinnamon and ginger, this unconventional recipe will give your taste buds something to party about.

Visit An Edible Mosaic to learn how to make them.

Foodies who love to cook with booze will adore this one. Between the sweet potato latkes and brandy-laced apple sauce, it is the perfect food-based relationship.

You could also use whiskey, rum, or vodka — whatever you have on hand. BRB, covering everything in spiked apple sauce.

Make all the other latkes jealous with the help of Connoisseurus Veg.

Persimmons are something special. This delicately sweet fruit hails from Eastern Asia, slowly gaining popularity in the United States. Typically, they're the star of delicious dessert recipes... until now.

Thanks to this recipe, you can learn how to incorporate persimmons into your potato latkes. It's another rad combo of savory and sweet.

Check out the full recipe at Three Little Halves.

Once upon a time, latke burgers became a thing. And now, grilled cheese latkes are also a thing. Can we just talk about how smart some people are?

It goes without saying that this is the ultimate comfort food. The recipe also suggests adding avocado or spinach to the sandwich, something I can totally get behind.

Head to Kitchen Tested for the mouthwatering how-to.

If you're anything like me, your heart skipped a beat when you read "s'mores latkes." This is real sorcery right here.

Made with sweet potato and graham cracker latkes, this recipe is spot-on for Hanukkah sleepovers. It's like a summer night wandered into the holidays, making sure we didn't forget how awesome it was. I have a good feeling this recipe will do just that.

Click on over to Kitchen Tested and prepare to be amazed.

For more awesome holiday ideas, check out Bustle on YouTube.

More like this
Starbucks Released New Menu Items For The Summer
By Emma Garza
A Beginner's Guide To Drinking Whiskey
By Alexis Morillo
13 Summer Solstice Quotes To Celebrate The Longest Day Of The Year
By Sadie Trombetta
The Summer Solstice Spiritual Meaning, Explained
By Jessica Booth and Brittany Beringer
Get Even More From Bustle — Sign Up For The Newsletter