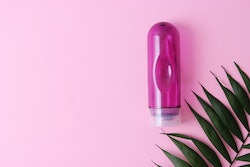 In a world of personal lubricants that vary in taste, texture, and sensation, it's hard to know which is the right one for your body. Luckily, there are a few household products that can make great natural alternatives to lube. On top of not being able to pronounce half the ingredients listed on the bottle, studies have suggested that some products can even mess with vaginal pH balance and should be reformulated.

The process of finding an alternative can be a little daunting, though. When I started my research on the best natural alternatives to lube, I was discouraged by a lot of things that didn't seem to qualify. Obviously, oils are tricky — especially when it comes to vaginal sex and sex with a condom. Oil can corrode the latex of the condom significantly, according to The National Center for Biotechnology Information, which can then cause it to be less effective and even tear during intercourse. I also discovered that "waxes," such as shea butter, beeswax, and jojoba oil, can damage the skin cells of the vagina and compromise its ability to replace vaginal skin, according to Women's Health. And of course, anything sugar based is a definite no-no as well, due to its tendency to cause yeast infections.

When it comes to other ingredients, though, Dr. Mary Jane Minkin, MD, a clinical professor in the Department of Obstetrics, Gynecology, and Reproductive Sciences at the Yale University School of Medicine, says it all depends on your level of sensitivity. She suggests buying a small bottle to start out with and then paying attention to how you react — and that's especially true if the lube has additives like dyes in it. "Because basically, the vaginal and vulvar tissue is the most sensitive tissue in the body," she adds.

In addition to dyes, some people avoid certain preservatives like parabens. A 2015 study suggested that in a lab setting, parabens in particular can contribute to breast cancer cell growth. Still, as Amy Levine, MA, CSE, sex coach and founder of Ignite Your Pleasure, tells Bustle, the long-term health risks aren't entirely clear yet.

So for anyone as paranoid about chemicals as I am — as well as those who's skin and vagina are just as sensitive as mine — here are the best and safest at-home alternatives to personal lubricant. But before trying anything new, make sure that:

Here's what I found.

You know that bottle of aloe vera gel you've been stowing by your bedside to tend to your sunburns? It has many other uses besides tending to your charred skin. Thanks to its antibacterial properties, this miracle skin saver can heal other skin-related wounds and even ease the symptoms of burns, psoriasis, and other skin conditions, according to Dr. Mike Roussell for Shape Magazine.

But what you didn't know is that aloe also makes a great lube, according to pharmacologist Joe Graedon of The People's Pharmacy. Aloe is already known to be incredibly gentle and neutral on all skin types, so it's safe to use around your vagina. Make sure your aloe gel is 100 percent pure aloe vera, and contains no sugars or artificial ingredients.

Graedon suggests rubbing the stuff on the inside of your elbow first to ensure that you are not allergic to the latex in it (unless you already know you have a latex allergy, in which case you may want to steer clear of aloe altogether). Plus, the slippery stuff is totally safe to use on condoms since it contains no oils or properties that can break down latex.

The idea of sticking egg whites into my vagina terrified me at first. First of all, I'm a vegan, so sticking any kind of animal product in my body is less than desired. Then my hypochondriac side chimed in, singing tales of salmonella and subsequent death. If the former bothers you, I can't really do much to comfort you. It's your body, and if this sounds gross and unethical to you, don't do it. As for the latter, however, you will probably not get salmonella if you're buying a pasteurized egg white mix, according to foodsafety.gov. Still, the medical community is very hesitant to recommend it. "Salmonella, need I say more?" says Levine. According to obstetrical nurse Maureen Stephens, however, applying egg whites to the vagina (specifically for fertility purposes) "is safe and comes with no side effects."

Additionally, many women in homeopathic circles believe in the stuff, and use it not only for lube but also for conceiving, since apparently it's good for making sure the sperm is going where it needs to go. It can be a mess to apply (as lube at the best of times) so opting for a dropper of some sort or simply embracing the messiness will be your best options. Egg whites are best served at room-temperature in a bowl or vessel of your choice.

According to sex therapist Brier Jirka, some vegetable and mineral oils like avocado, coconut, and olive oil can be used as personal lubricant. They can be great for clitoral stimulation and vulvar massage, or some quality alone time, but keep them far away from your condoms (it could make them break). Natural oils are great, not only because rubbing oil over your body feels so damn good, but because it lasts way longer than water-based lubricants. "If it's organic, then it's good," Levine says, "So as latex is not a factor."

Coconut oil especially intrigues me. As we all know, it's a wonder product that can be used for a multitude of purposes, including dietary and beauty ones. According to Levine, it's also "been used for a long time particularly for stretching the perineal massage in preparation for childbirth." But coconut oil also makes a great lube. Make sure it's virgin and unrefined with no added sugars. It can take a little while to melt at first (since the stuff comes out thick), but it will get slippery as things heat up (temperature-wise and sexually speaking). Bonus: Coconut oil has anti-fungal properties.

When I asked for Levine's personal opinion on natural lubes, she recommends organic ones like Yes water-based lube. Basically, anything that is organic or natural is preferable. "If you're having a lot of solo or partnered sex, something more pure/healthy is a better choice," she adds. When all else fails, good old saliva will do the trick, as long as "you and your partner are not at risk for STDs that are spread through saliva like Hepatitis."

To all my fellow chemical-fearers and experimenters: Get ready to re-vamp your lube routine.

Dr. Mary Jane Minkin, MD, a clinical professor in the Department of Obstetrics, Gynecology, and Reproductive Sciences at the Yale University School of Medicine

This article was originally published on Sep. 29, 2015