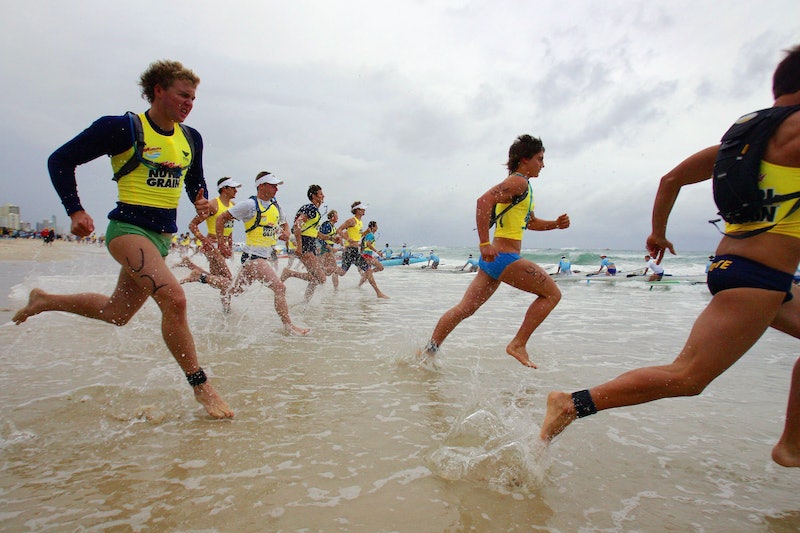 How do I love running? Let me count the ways. It’s (relatively) free, it’s something that can be enjoyed alone or with friends, it gives you a great endorphin rush, and it can help you live longer. I’ve been a runner for at least half my life. I live, breathe, and love running. But, I get it. It’s not for everyone.

When I ran the New York City Marathon in 2011, a non-runner friend of mine aptly described our differences: “I don’t understand how people like running. If you added up all the times I’ve ever run in my entire life, it still probably wouldn’t equal a marathon, which you were crazy enough to do in one go.”

Running is tough, both physically and mentally. And there are times when I truly, truly despise it and question why I torture myself so much. This mostly occurs in the summer months.

While running is technically an all-season sport, some seasons are better than others for running (fall) and some just plain suck (summer). There’s no way around it.

Here are 15 reasons why running is just plain harder in the summer.

Winter running is dreadful, but at least you can add layers.

You can’t really run naked in the summer — as much as you would like to.

Running ends up being squeezed into twilight hours.

Any hour without the sun is ideal, but unless you are accustomed to waking up at the asscrack of dawn or staying up super late, this is going to throw a wrench in your schedule.

But even then, it’s probably too hot.

It might not be 85 degrees yet, but when it’s already in the 70s in the morning, you know you’re screwed.

You will be very shiny.

Yeah, even those girls who look flawless after workouts are going to look like they’ve jumped into a pool. You will sweat. A lot. Just go with it.

Sweating is our body's way of cooling off, but the water is supposed to evaporate when it reaches the air. When it’s humid, it just sits there on the surface of your skin and makes you miserable.

And you'll probably chafe. A lot.

Stock up on the Body Glide.

Gnats, flies, mosquitos — they are everywhere. Including, possibly, flying in your eyes, nose, and mouth.

The humidity takes a toll on air quality, too. Coupling that with common seasonal allergies like freshly cut grass, flowers, and mold makes many more susceptible to asthma attacks. Breathing while running can be hard enough, but summer makes it nearly impossible.

Your whole body has to work harder.

A good rain run can feel adventurous and fun, but not a downpour. Thunderstorms happen more in summer, so if it's calling for rain, stick close to home.

Men can run without shirts no problem, but if a lady strips down to her sports bra?

Growing up in the suburbs, I was in spandex and sports bras as soon as the thermometer hit 75 degrees. But once I moved to New York, I started getting creepy looks, whistles, and catcalls from men. I was especially uncomfortable because I ran alone early in the morning. I started wearing tanks and loose shorts at all times to protect myself from unwanted advances, which really isn’t cool.

Have fun showing off your sports bra and running shorts tan. Wear it like a badge of honor.

And forget having nice sandal-ready feet.

You probably have calluses or blisters, and, let's be honest, are missing a toenail or two.

Running on the beach sounds like a good idea in theory, but it's actually incredibly hard. If you look like a Baywatch girl, tell us your secrets. Otherwise, you might find yourself falling out of your routine.

Treadmills are no substitute for being outside.

The “dreadmill” is the bane of many runners’ existence. It fights your natural stride, puts you at risk for injury, not to mention is super boring — no matter how many Real Housewives marathons you can watch. Plus, joining a gym just for the treadmill can get pricey, and no one likes that.

Still, you know that at the end of the day, you could never give it up.

Just be sure to stay hydrated, cool, and safe and you'll find that summer won't totally kill all the fun. And if it has? Well, it's nearly fall.