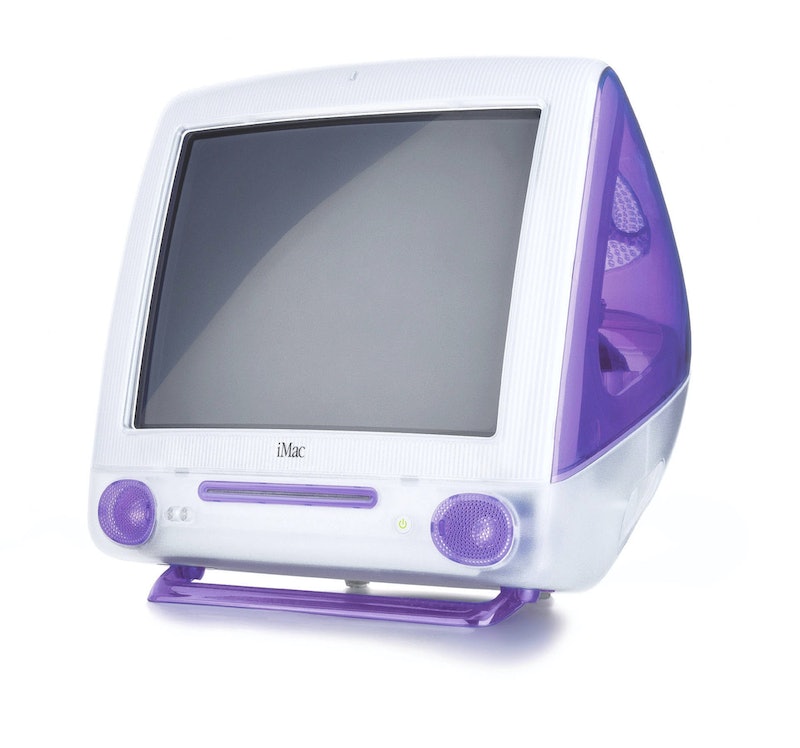 It's funny how the things that seem so futuristic when they're first released end up getting so retro, so quickly, isn't it? It’s a tale as old as tech. One year’s treasure is the next year’s trash — or, at best, the next year’s “y2k chic” Depop listing. Take, for instance, the recent “it girl”-ification of wired headphones, a device that hardly seemed dated until about last year. Or, the VHS camcorder aesthetic that influencers now strive to capture with their highly advanced iPhone cameras.

As ironic as it may be, there’s something timelessly charming about obsolete ‘90s technology. Something of the guinea pig years for tech as the world knows it today, the '90s and early 2000s, saw a huge array of advancements in home computing and electronic technology, from extremely ‘90s pagers to GameBoys that some are still using today. So it's no wonder that those who grew up during that time have a soft spot for the tech of their youth. (Slash, why so many Gen Z’ers have romanticized the “retro” aesthetics of their infant years.)

Whenever you're having trouble keeping up with the technology of today (and the youths who use it), just remember that every generation will one day have to square with the same thing. Sure, skinny jeans are no longer the cutting edge (and circulation-cutting) innovation you once thought they were. But, at least your AIM screen name won’t live on forever like today’s TikTok tweens’ videos.

From Hit Clips, to Palm Pilots, pagers, and more, here are some of the most nostalgic pieces of tech from the ‘90s and early aughts.

Or “beepers,” or “buzzers,” or whatever the heck you called them. Pagers actually have a long and rich history. The first radio pager system was put into place in 1950, with doctors in New York City paying $12 a month for access to six-ounce pagers that could receive phone messages within 25 miles of a transmitter tower. Then Motorola developed the ReFLEX wireless protocol in the '90s, leading to the widespread use of pagers non-doctor laypeople throughout the decade. Bonus points if yours was neon, see-through, or both.

In 2001, however, Motorola announced that it would cease manufacturing pagers, thus signaling the end of an era. Good thing we've got smartphones to fill the void now.

These old reliables played low-quality, one-minute clips of songs from NSYNC, Britney Spears, and more of the '90s' and early '00s' hottest acts. Sure, the sound quality made it sound like your boombox had gotten stuck in a garbage disposal, and repeating the same minute of “Baby, One More Time” on repeat probably tested your mom’s patience. But, at the time, jamming in your room alone to a HitClip felt like the next best thing to winning a Backstreet Boys ticket sweepstakes.

Who could forget their first Discman? Originally launched in 1984, it became a must-have for every music lover over the next decade or so. The highly popular Discman D121 model had little to no anti-skip, but good gravy, was it beloved! So many memories, with such a questionable soundtrack.

Falling somewhere between the height of the Discman and the rise of the MP3 player, MiniDisc players first hit the scene in 1992, finally giving a digital means of storing and playing music. Alas, the technology just wasn't advanced enough to stay ahead of the curve — although somewhat surprisingly, Sony marketed them until as recently as 2013.

Let's move away from music for a moment. Remember these guys? They were perhaps more a product of the '80s than the '90s, but before the Game Boy really hit its stride, they were the only video games that you could actually take with you on long car rides.

Yes, the big ol' green-screened clunker that was the pinnacle of handheld gaming between 1989 and 1996. After that, the Game Boy Color came along, and, well, now there’s handheld systems capable of displaying 3D images without the aid of those freaky glasses. How the times do change. But hey, at least retro gaming has made something of a comeback; you can easily run the original Sonic the Hedgehog on your smartphone these days.

Fun fact: The very first car phone dates back to 1946. The equipment for it weighed 80 pounds. Like the Tiger handheld video games, the car phone hit its peak in the 1980s. By the time the late '90s rolled around, the cell phone had largely replaced it. They were almost mythical; the most high-tech thing one could imagine. A phone… in your car. How cool was that?

Nothing dates itself quite like an aesthetically distinctive piece of technology. iMacs are still around, obviously — they're Apple's signature desktop computer — but they've since moved on from that unique, space-age look to something sleeker. But who doesn’t miss the see-through versions of their youth? There's something inexplicably thrilling about being able to see your device's innards.

No, not public displays of affection — “personal digital assistants,” of the variety made popular by Palm in the mid-'90s. First launched in 1997, Palm Pilots, aka PDAs, were the mobile organizers of your dreams, keeping track of everything from your dentist appointment to that really important presentation you had coming up. Alas, though, like so many other products, they become mostly obsolete with the rise of the smartphone. Why carry two devices capable of upping your productivity when you could carry one that does it all instead? For the curious, a relaunched Palm device came out in 2018, marketed as something between a smart watch and an actual phone.

Zip drives still feel like the MiniDisc player of computer data storage: They fall between one extremely popular system and another, although they're neither low-tech enough to be lumped in with the former nor high-tech enough to be paired with the latter. Instead of Discmen and MP3 players, though, the two poles in this instance are floppy discs and CD-ROM.

Zip drives were introduced by Iomega in 1994, and initially sold well, thanks to their relatively low price point and high-for-the-time storage capacity. To put it in perspective, the three-and-a-half-inch Floptical diskette released in 1991 held 21 MB of data, while the three-and-a-half-inch Superdisks released in 1996 and 1997 held 124 and 240 MB, respectively. An Iomega zip drive cartridge, however, could hold anywhere from 100 to 750 MB, depending on how recent your model was.

But then CD-writing technology happened, and then thumb drives happened, and, well … you know how this one goes. You can still get the cartridges on Amazon if you really want them, though.

If you were a ‘90s baby, there’s a good chance that Tamagotchis raised you. (And that you raised Tamagotchis.) Now 25 years old, this digital pet device gave many millennials their first taste of responsibility — as well as their first taste of grief. The handheld game required users to feed and care for their digital pet like a real animal, and, if you couldn’t tend to its need by sneakily caring for it in your locker, it kicked the bucket. Looking back on the past few years, it’s easy to wonder whether these little companions were before their time.

At the time, it felt like you could do everything on a Nokia phone. Make a call, play an extremely lo-res video game, and... Well, that was about it. It wasn’t until 2002 that Nokia would debut its first swing at a smartphone with an integrated camera. However, throughout the 1990s, Nokia phones still felt elite, thanks to their stylish colors and unbreakable build.

Created specifically as a prop for use in Home Alone, the Talkboy quickly became a coveted toy amongst the budding Kevin McAllisters of the world. The fairly simply cassette recorder allowed kids everywhere to record their own messages or “spy” on family members — and later versions even allowed for voice changes. Nothing says “product of its time” quite like the creation of the Talkgirl, though — which was literally the same toy, just in pink.

The electronic diary was something like a children’s version of the PDA. Perhaps the most popular iteration was the Dear Diary from Tiger Electronics, which included features like a personal horoscope, a digital phonebook, and more.

Sure, the first iPod didn’t come out until 2001, but, now that the iPod has officially been rendered obsolete by Apple, it deserves its own obituary. The original iPod completely changed the game when it came to MP3 players with its sleek, compact design and a song library storage of up to 1,000 songs. As the iPod developed into later generations like the iPod Shuffle and iPod touch, it also paved the way for the multimedia capacities of smartphones today.