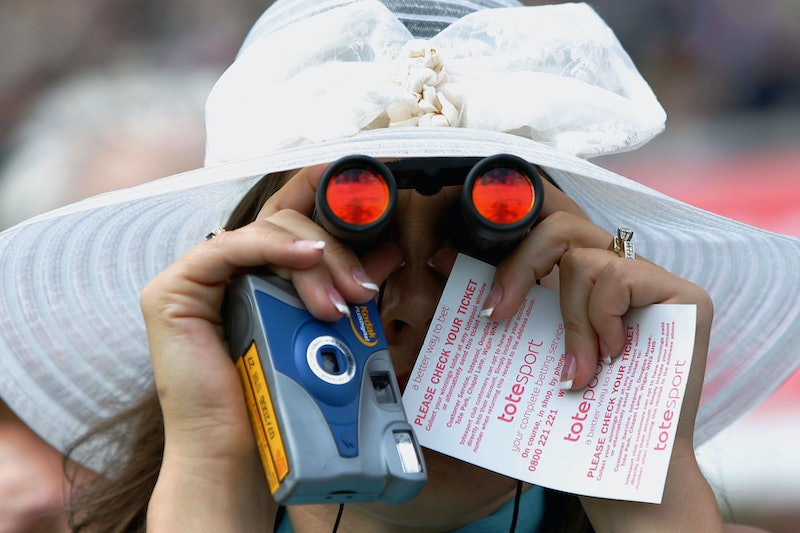 Oh, you thought micro sunnies and bucket hats were the only ghosts of the ‘90s that would haunt the year 2021? Technology trends from the last millennium are coming back. Return to your childhood bedroom and dig out your treasures, because they’re cool again.

While current technology might seem like a futuristic dream that makes the Jetsons look like the Flintstones, tried and true devices and gadgets from over 20 years ago are reappearing from brands like Apple, Samsung, and Google. But these relics from the ‘90s are returning to the mainstream, only vaguely disguised as new products. A touch screen with a stylus pen? Yeah, that’s called a Palm Pilot, and it’s been around since 1997.

“The tech industry, much like fashion, is constantly evolving and when done right, it always finds its way back,” Laura Joss, Ph.D., global director of Motorola’s design research team, tells Bustle. Just as Empire Record’s wardrobe has somehow made its way into Emma Chamberlain’s closet, low-fi technology is back.

Here are some of the ‘90s most beloved gadgets and gizmos being revived right now.

Over the last two years, cassette tape sales have skyrocketed, per Inverse, thanks to a nostalgic increase in demand for physical products. Artists like Dua Lipa and Lady Gaga are so confident that cool kids will continue to indulge in the nostalgia that is a WalkMan and foam-padded headphones that they’re releasing major albums on the medium. Even Urban Outfitters has a cassette page, featuring special editions of artists’ albums from Britney Spears to Billie Eilish. Despite there being hundreds of ways to listen to high quality audio with the advent of the internet, you can’t beat the feeling of flipping a tape over to get to Side B.

In 1998, Apple released the OG Bondi Blue iMac G3. It was see-through, it was colorful, it screamed “I am fun, but I am serious,” and it was a big hit. Over the next 20 years, popular Apple computers got a lot less colorful; iMacs in particular came in simple variations of gray and white. But in July, Apple released the “reimagined iMac,” which is a futuristic spin on the OG desktop. Colorful Macs are back, in seven different hues. While the G3 was 22.6’’ wide, the new iMac clocks in at 11.5mm, because, well, innovation; it also trades the translucent housing you know and love for a more iPhone-esque opacity. Thankfully, it also uses regular Internet, not dial-up.

Once upon a time, in the ‘90s, people took pictures with cameras and got them developed and then put the physical pictures into little plastic protected booklets called albums. You might have an album dedicated to a trip or a party, or a miscellaneous album of a certain period of time. Gen Z decided to take out the physical components and rebrand them as digital albums, called photo dumps, which are basically just a carousel of images posted on Instagram.

While the first Nokia cell phones might have weighed you down in the ‘90s, over the next 20 years, cell phones got smaller and lighter. Now, the latest smartphones are back to brick size and thriving. The iPhone 12 Pro Max has a 6.7’’ screen, while the Nokia 3210, released in 1999 was 4.87’’, total.

Polaroids, disposable single-use cameras, and apps that make photos look similarly low-fi have been popular over the last decade. But now tech trends are showing a sustained interest in analog photo taking and stores like Urban Outfitters are offering various 35mm film cameras. According to Google Trends, people have been looking into single use cameras more and more over the last five years, and the search term hit an all time high this past summer.

Flip phones first hit the market in the ‘90s, though one of the most popular, the Motorola Razr, came out in 2003. Motorola relaunched the classic phone in 2019 with some new additions, like Quick View display, a feature that allows you to make calls, reply to messages, pay with a tap, control your music, take selfies, use Google Assistant, and access customized settings without opening your phone. It also has a retro mode, which quite literally turns the phone back 20 years, offering T9 texting and low-fi graphics. Samsung also makes two foldable devices, the Z Fold and the Z Flip. Because while you couldn’t wait to have a big, flat screen so crisp that you could watch a movie on it, you also miss slapping your phone shut at the end of a call and not having to think about screen time.

With alarm clock applications built into most phones, the standalone machine is a rare sight these days. But with people increasingly aware of how much your phone can mess with your sleep, there are tons of new options for digital and analog alarm clocks. In July, The New York Times reviewed a variety of digital, analog, and smart-but-not-on-your-phone alarm clocks for people interested in putting some distance between their phones and bed time.

According to Google Trends, they’re not just back from the dead, Tamagotchi got a reboot. The digital pet is rising in popularity over the last five years, so much that in 2019, the company released a new version of the portable game called the Tamagotchi Pix, which comes with a camera so users can personalize their caretaking experience. In a blogpost, the company says it is trying to make the classic toy more Gen Z-friendly, given that the Millennials who grew up with them are now adults. What’s more, the Verge reported that come November 11, a Star Wars themed R2-D2 Tamagotchi will be released.

The ability to digitize the touch of a pen was sort of a big deal in the ‘90s. The Palm Pilot was this savvy, business-forward device that grown ups with important things to do had. Brands like Apple and Samsung have brought back the foundational elements of the device with the Galaxy and the S Pen Pro and the iPad Pro and Apple Pencil. You can have the tactile experience of using a pen and paper, but with a digital back up that can be shared and sent instantly across devices.