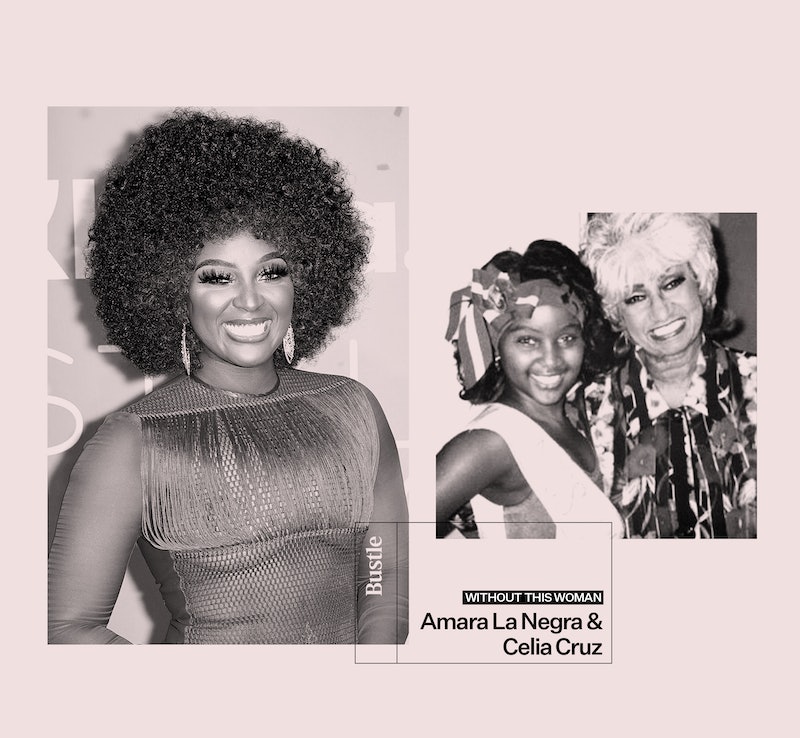 Bustle’s “Without This Woman” is a series of essays honoring the women who change — and challenge — us every day. In honor of Latinx Heritage Month, Love & Hip Hop: Miami breakout star Amara La Negra reflects on how the late Cuban salsa icon Celia Cruz taught her to be proud of her Afro-Latinx identity.

Growing up in Miami, I remember walking around in my mom’s shoes, trying to imitate Cuban-American singer Celia Cruz. I wanted to be just like her. Very few Black people find success in the Latin market, but she was the first to achieve international fame. She broke barriers worldwide for the Afro-Latino community. Celia Cruz was the Queen of Salsa, and she was Black.

Most people were introduced to me in 2018 through VH1’s Love & Hip Hop: Miami, but at age 4, I became a cast member on the Spanish-language variety show Sábado Gigante. I was there for six years every single Saturday, and I was lucky enough to perform with Celia Cruz on three occasions. Backstage, I used to model through all the hallways. She would see me and laugh because I was very sassy. I’m grateful for those memories.

“By watching her, I learned a lot about what it means to be Black and Latina, and what a blessing it is to be born with melanin-rich skin.”

I performed with a lot of major artists on Sábado Gigante. I don’t think I understood how big everybody else was, but I definitely understood the magnitude of Celia Cruz. Even at an early age, I could feel her greatness; it was something out of this world.

By watching her, I learned a lot about what it means to be Black and Latina and what a blessing it is to be born with melanin-rich skin. Some people tried using her Blackness as a way to discourage her, but she used it to her advantage, to empower herself and so many others. I wish she knew how impactful her life was to so many Afro-Latinx people like myself. Thanks to her work, I’m able to use my voice to speak candidly about racism and colorism within the Latinx community and continue to move that conversation forward.

After taking somewhat of a musical hiatus, I’m back in the studio, and so much of my inspiration stems from Celia Cruz. I’ve always been a showgirl, and I can tell you that there’s a difference between just holding a mic and giving a show. She didn’t have a thousand dancers behind her, and choreography wasn’t part of her act, but she alone could entertain for three hours straight, just with her voice and her charisma. It takes a lot of confidence, it takes a lot of artistry, it takes a lot of everything to be able to do what she did.

“She was humble, she was charismatic, she was this big light whenever she walked into a room.”

I was in school when I learned of Celia Cruz’s death in 2003. I cried so much. Eighteen years later, I can think back to that day and still cry about it. At 13 years old, I felt like my superhero died. In your mind, you think your superhero is eternal. She represented hope for me. She was so powerful through her music and through the way she carried herself. Even those who are prejudiced against Afro-Latinos had to take several seats and say, “Damn, she’s got it.”

When it comes to Celia Cruz’s crossover appeal, we sometimes try to search for why, but the truth is, certain people are just born with that gift. She was humble, she was charismatic, she was this big light whenever she walked into a room. Unfortunately, in due time, after your purpose is fulfilled on earth, you’re called home. But without a doubt, I believe Celia Cruz was the chosen one.