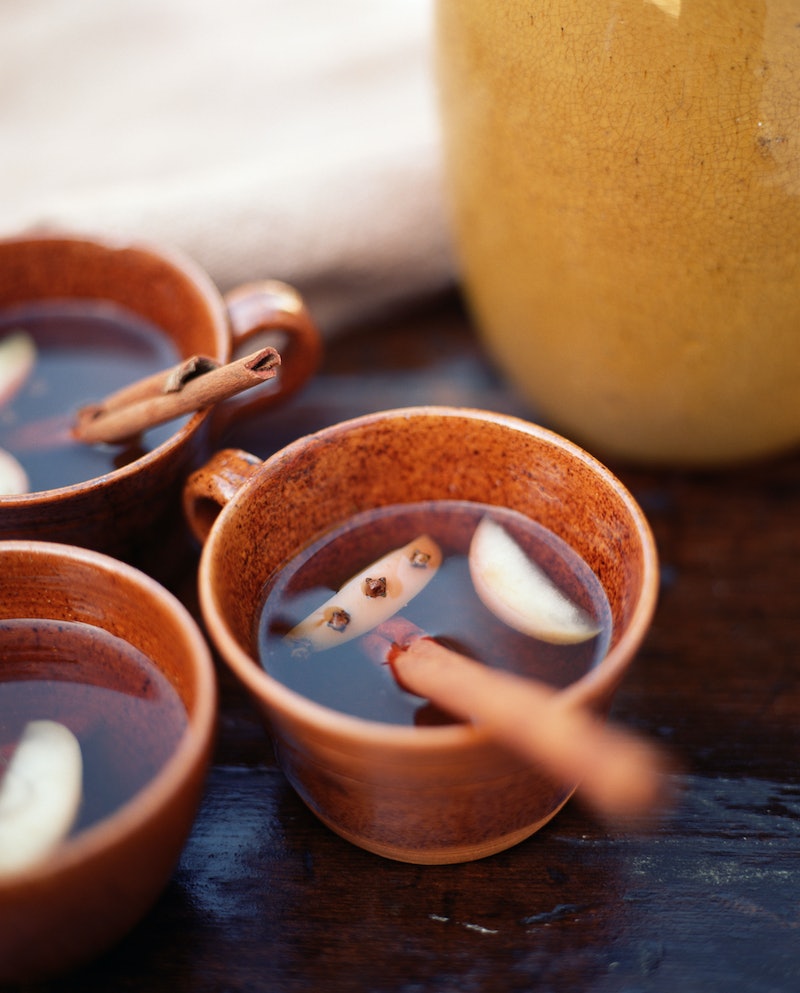 Sorry, pumpkin spice latte — there's another autumnal drink in town, and it's been a fall favorite long before you were even a blip on the radar. I'm obviously talking about warm apple cider. Whether you buy it fresh from your local farmers' market, snag a cup at your favorite coffee shop, or pick up a gallon at the store, apple cider never disappoints, especially when the leaves start to change colors and the weather starts to feel a little more brisk. PSL lovers can say what they want, but cider is this season's most perfect drink — perfect for sipping outside with friends, perfect for when you really just don’t need the caffeine from another cup of coffee, and perfect when you're simply looking for a warm taste of fall. And the best thing about apple cider? With a few simple twists, it's possible for this nectar to taste even better.

Though cider may seem perfectly delicious on its own, you shouldn’t feel limited to just drinking it straight from the bottle. By mixing in some spices, toppings, and special ingredients, your apple cider can get a serious makeover. So let’s take things to the next level, OK? Because a drink that captures the fall season so perfectly is something we can all get behind.

If you're buying your cider pre-bottled, don't just sip it straight from the fridge. A minute in the microwave or on the stovetop turns this drink into a belly-warming mug of pure delight. Want to savor the heat even more? Take a cue from this TikTok and go on an autumnal walk with your warm mug.

The easiest way to lightly spice your apple cider is to grab the cinnamon from your spice rack, and dash a bit into your cider. Mix well for an enhanced flavor. For extra fanciness, use a cinnamon stick to stir your hot drink, or place a few sticks in the bottle to infuse the cider with spicy goodness.

Want to make things more adult? Add a little alcohol. "Whiskey tends to be the most popular base for apple cider based cocktails, with bourbon as the fan favorite,” Liz Paquette, head of consumer insights at alcohol company Drizly, tells Bustle. Not a bourbon fan? Paquette also recommends honey whiskeys and beer cocktails as alternatives.

This should go without saying, but doesn't whipped cream make literally everything better? Try vanilla or cinnamon-flavored whipped cream so you’re adding more than just sweetness.

If you want to add alcohol to your apple cider, but not that much alcohol, try an apple cider mimosa. This TikTok suggests lining the rim of a champagne flute with caramel syrup and brown sugar, then adding apple cider to Prosecco to taste.

If you live somewhere that’s a little too warm for hot mulled cider, but want to partake in the autumnal vibes, try this apple cider slushie. Freeze apple cider in an ice tray and then blend with a little more fresh cider until you get your desired consistency. (Could you add alcohol to this? Without a doubt!)

A bit of fresh orange zest adds a kick to regular apple cider, and will make you feel like a master chef for even using your cheese grater for something other than cheese in the first place.

If you want a little caffeine boost with your apple cider, step away from the coffee. Chai spices — which differ from blend to blend, but typically include cardamom, cinnamon, ginger, and a little kick from pepper or cloves — pair wonderfully with warm apple cider. Steep a tea bag in your cup for two to three minutes, or warm your cider on the stove with a teaspoon of a mix, like this caffeine-free blend from Diaspora Co.

After topping your cider with a generous heap of whipped cream, drizzle on some caramel syrup. Better yet, make a drinkable candy apple by blending or melting caramel into your drink. Want a subtle hint of caramel, not an onslaught? Take a cue from these TikToks and line the rim of your glass with caramel dip.

Impress your friends with your mixology skills with a cocktail inspired by this TikTok. Smoke a cinnamon stick in the glass you’re going to use. Then, add ice, amaro, cider, lemon juice, sparkling wine, and club soda. Garnish with a fresh cinnamon stick and rosemary.

If you've really got a sweet tooth, a spoonful of maple syrup perks up a cup of cider while also adding in yet another amazing fall flavor. Can you even handle all this autumnal goodness?

What’s better than apple cider? Apple cider doughnuts, obviously. Bring back a container of rings or holes from your local farm stand, heat them in the microwave for 15 seconds, and enjoy.

This article was originally published on Oct. 8, 2014