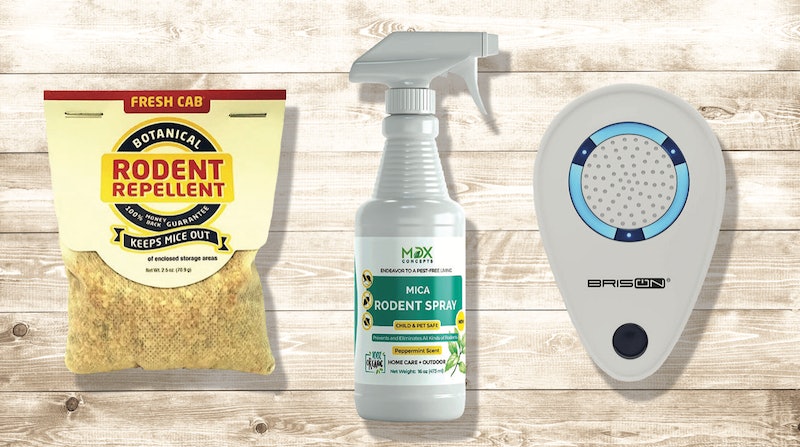 Mice can be incredibly hard to get rid of. Plus, calling an exterminator can be pricey and setting up your own traps can be unsettling if you're afraid of coming into contact with the rodents (many of them only capture the mice instead of repelling them in the first place). With that being said, finding the best mouse repellents is an effective preemptive step in keeping your home pest-free, by deterring mice with ultrasonic vibrations or pungent formulas. They're usually nontoxic, too, which is a plus if you have children and pets.

While shopping, there are certain things to consider while deciding between these two repellent methods. Ultrasonic repellents emit high-frequency sound waves to deter pests from coming into your home — and since the sound waves these use are usually above 20,000 hertz, humans can't hear them. (That's because the average human hearing range is between 20 and 20,000 hertz.) The most common type can be plugged into your outlets, but there are also standalone models that use powerful vibrations to discourage pests, like the solar-powered outdoor stakes provided below. However, the outdoor selection listed here works at 450 hertz, which is audible to the human ear. Still, both methods don't require fumes of any sort and work without the use of repellent formulas or chemicals.

Formula-based repellents on the market use ingredients such as vinegar and essential oils to help keep rodents at bay. These are offered in formats like spray bottles and pouches. By choosing these, you're able to use them directly in problematic areas while also avoiding rodenticide, which is a poison used to exterminate rodents. However, it should be known that different formulas can leave a scent behind, based off the ingredients used. On top of that, many natural ingredients utilized within natural repellents — various essential oils, to be exact — can be hazardous to pets if consumed.

To keep the mice away so you can play, scroll on for four customer-approved ways to help you get a pest-free home.

Not only does this electronic pest repelling device work to deter mice, but it also works on rats, bed bugs, spiders, and more — all within a 1,100-square-foot space of where it's plugged in. It can be inserted directly into your wall outlet and uses ultrasonic, electromagnetic, and optical waves to repel pests — and the vibrations can reach between 24,000 to 65,000 hertz. And since it's nontoxic, it won't affect humans or pets in the process. Many reviewers have mentioned how they can't hear these when they're plugged in. In fact, one person wrote: "I was worried I would hear a small noise, like a hum or ear-ringing but these are silent!" Similarly, many people wrote that their dogs haven't seemed bothered by the plug. As one person noted, "I was worried the sounds would bother my dogs, but so far they haven’t even raised an ear!"

However, according to a note on the package, the pests in your house might appear when you plug the device in (which may seem counteractive), but that's because they're coming out of their hiding spots, though — so, if that happens, you'll know it's working. The manufacturer also recommends having one per room and waiting three weeks for results. There are two plugs in this box, but you can also opt for a four-pack.

According to reviewers: "Living in the country we have a horrible problem with field mice! We plugged this in & haven't heard any scratching sounds or seen mice! It's perfect if you have children cause lots of times the pesticides can be very dangerous to little ones!"

After these solar-powered stakes are dug into the ground so that two inches are visible per insert, they'll be able to repel mice within 7,000 square feet around each one, according to the manufacturer. After being turned on with the switch, they work by producing ultrasonic vibrations at 450 hertz to ward off rodents and other pests beneath the dirt surface. They're great for gardens, farms, and more — and since they're nontoxic, they're safe for both humans and pets to be around. However, unlike the first option, this pick seems to emit vibrations that reviewers have heard. One person wrote: "They do emit a rather noticeable humming or buzzing sound every 20-30 seconds or so. They can easily be heard from 15-20 ft away but the sound diminishes greatly after that."

After being charged in the sun for four hours, each stake will repel mice for up to five days — and since they're each rechargeable, you can put them outside whenever it's sunny out. They're also waterproof, so you can even leave them out there.

According to reviewers: "Purchased and received this item to have raccoon and mice away from my backyard. This is so cool and it seems to be working."

Made with a natural blend of vinegar and essential oils such as peppermint and rosemary, this repellent spray offers a natural option to deter both mice and rats. Similar to the others that I've mentioned, it's nontoxic, and the brand claims that it's suitable for use around both humans and pets. However, some reviewers have mentioned that their cats do not like the smell of this spray, and one person wrote: "When I first used it, my cat kept rubbing his eyes, so I suspect it's too strong for him." And since cats can be allergic to various essential oils including peppermint and cinnamon — both of which are included in this formula — this might not be the best pick for home with cats. However, the manufacturer wrote that it's safe to use around pets. One person who used it around their dog wrote, "This has worked great! I have several dogs so I needed something pet friendly... it works!!"

If you do choose this repellent, it's super easy to utilize: All you have to do is shake it and spray it. However, there's no mention of the amount of space one spritz can cover. This product won't stain where you use it, and it can be sprayed both inside and outside. Plus, with a 4.4-star rating and over 1,000 positive reviews, it's clear that people love it.

According to reviewers: "The spray was very helpful as the mice have not reappeared and there was no harsh smell of chemicals or chemical residue the next morning."

These botanical rodent repellent pouches — which come four per order — can be placed around your home to prevent mice. They're plant-based and made with balsam fir oil to help keep rodent away — and like the others, they don't include rodenticide (the only ingredients are balsam fir oil and plant fibers). Still, the product label advices customers to keep it out of reach of children. There's no mention of these natural repellent pouches being pet-friendly, but many customers have used them around dogs and cats without an issue. One person wrote, "Amazing product that is safer than all the other chemical products out there for our family and dog." A different customer with cats wrote that it "keeps the field mice away in basements and outside deck, without endangering our cats' health and well being."

These work by slowly releasing the essential oil into the atmosphere to defer pests, and each pouch can last up to 90 days. The manufacturer recommends most people place one pouch ever 125 square feet to keep mice away — but if your home is already infested, you should put one every 8 square feet and replace them more often (every 30 days, to be exact).