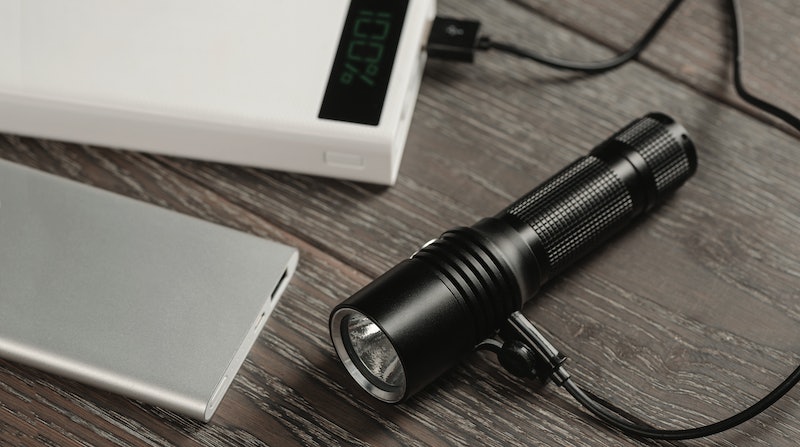 Whether you’re looking for a small light for household use or a more powerful one for outdoors, the best rechargeable flashlights are invaluable tools for navigating in the dark. Rechargeable flashlights typically feature LED lights and come with charging cables that either plug into standard USB ports or wall outlets. There are even options that are manually rechargeable in case you have no access to electricity. As you shop, look for flashlights that offer the brightness output (in lumens) and run time that you might need.

Lumens measure the amount of light a flashlight produces — and, as standard, a higher lumen output typically corresponds to a brighter flashlight. The right one for you will depend on its usage. If you plan on using your flashlight for simple tasks around the home, an option with around 100 lumens should be sufficient, while a flashlight with at least 500 lumens is better for large spaces like campsites or dark paths. Most options have multiple lighting modes, which can be ideal for a variety of situations and also help you maximize your flashlight’s battery life. Flashlights also often include flashing and SOS modes, which can be useful in an emergency situation.

Finally, if you’ll be using your flashlight outdoors, you might want one that’s resistant to water and/or dust. The IP rating will let you know how resistant a unit is to either or both of those elements. If you want to determine the IP rating of a rechargeable flashlight, look at the numbers that follow the “IP.” The first number in the rating refers to level protection from solid materials, like dust, while the second number refers to water. Typically, the higher the numbers in an IP rating, the more dust- or water-resistant it is.

Below, you’ll find some of the best rechargeable flashlights on Amazon. Most require a USB port or standard outlet to recharge, but you’ll also find a flashlight with a solar panel and hand crank for when you don’t have access to electricity.

1. The Overall Best Rechargeable Flashlight For Under $20

Ideal for those who want a low-cost, high-quality option, this rechargeable LED flashlight rings in at under $20 and can work for a variety of tasks. It boasts up to six hours of battery power and three lighting modes, including a flashing SOS mode and a 1,200-lumen high setting. One reviewer mentioned that even on the lowest setting “it is BRIGHT.”

When you require a little more illumination or want to turn it off, just toggle through the various settings with its single-button operation. The flashlight is made of aluminum alloy and with its IPX5 rating, it can withstand heavy sprays of water (though it is not rated for dust-resistance). It comes with a USB charging cable.

Promising Amazon review: “This is my favorite rechargeable LED flashlight. It has a good hand feel — almost the same size as a regular flashlight. I like the fact that the switch button is located on the side instead of at the end. Makes it more convenient to turn on and off. The light is very bright. Great product!”

If you want a flashlight for simple tasks, such as illuminating tight corners like cabinets or the back of a closet, this portable LED flashlight has you covered. It can emit up to 300 lumens, which is quite impressive for its size. The flashlight offers three lighting modes, and can run two hours on the brightest setting and nearly six hours on the 120-lumen low setting. In addition to its various lighting modes, the flashlight’s zoom function allows you to zoom in for a more focused light source, or out if you want a wider view of your surroundings. It’s designed with a pen-like pocket clip that easily attaches to clothing.

The flashlight is just as sturdy as it is functional, too. It’s made out of aircraft-grade aluminum, making it resistant to scratches, scuffs, and dents, and boasts an IP67 rating, which means it isn’t susceptible to dust and can be submerged in 1 meter of water for up to a half-hour. When it’s time to recharge the flashlight, you can plug it into a USB port using the included cable. If you’re without a power source, it can also run on standard AAA batteries.

Promising Amazon review: “It’s incredibly light and I forget that it’s in my pocket. It holds a charge for a long time.”

3. A Compact Flashlight With A Built-In Power Bank

For an option that’s multifunctional, you might like this LED flashlight. It has a built-in 2,200 mAh power bank with USB and micro USB ports, making it a great option for charging your devices on the go — just don’t expect it to charge your phone all the way to 100%, according to one reviewer. This flashlight comes with a split cable with USB, Lightning, and micro-USB plugs for charging both the flashlight and your devices. Plus, it comes with an adapter to charge it with a wall outlet.

With three lighting modes (high, low, and SOS), it tends to run for six hours between charges. However, you should expect it to only run for up to three hours on its brightest setting (1,000 lumens). Another feature you’ll love if you’re interested in convenience? The flashlight comes with a detachable magnetic end for hands-free use and a pocket clip. The flashlight has an IPX6 rating — which means it can sustain getting sprayed with forceful water jets from any direction — to prevent damage from precipitation.

If you happen to be looking for an emergency flashlight to stow in your vehicle, consider this similar, but solar-powered flashlight, which also features a short knife for cutting through jammed seat belts, a safety hammer for breaking car windows, and a compass.

Promising Amazon review: “I love it. I need it for my job. One fascinating thing about it is that in an emergency, I could use it to charge my phone. It is bright, durable and has long lasting battery.”

4. The Hand-Crank & Solar-Powered Flashlight For Emergencies

This rechargeable LED flashlight has a built-in NiMH battery that’s rechargeable in two ways, neither of which requires an outlet. On one side it has a solar panel, which can fully recharge the battery in 10 hours of sunlight. (Reviewers have reported that the fully charged battery lasts one to two hours.) On the other side of the flashlight, you’ll find a hand crank — the manufacturer specifies that cranking it for six minutes can offer you up to one hour of flashlight use. The flashlight is constructed from plastic, and though PrimalCamp doesn’t indicate its lumen output or whether it’s dust- or water-resistant, reviewers have confirmed that it’s useful for camping, power outages, and other unexpected emergencies. It has just one brightness setting, and you can use the carabiner to attach it to a bag or keychain.

Promising Amazon review: “These flashlights work great. You never have to replace the batteries. A solar panel charges in the day, a crank charges at night, perfect for the car. Perfect for camping, hiking, backpack, nice clip for a belt loop. Easily fits in [your] pocket.”

5. The Best Rechargeable Lantern With A Flashlight

When you’re outdoors after dark, you’ll probably need more than just the moon and stars to light your way. With a 4.7-star overall rating after over 6,700 reviews, this rechargeable lantern can do the trick. The lantern produces 130 lumens on high and 70 on low, and it has a six- and 12-hour run time, respectively. But if you need a brighter, more focused beam, you can use the 1,000-lumen torch setting, which has a five-hour run time. A yellow button at the end of the lantern switches through its five modes and powers the unit on and off. In an emergency, you can push the red button to activate a red SOS light. Carry the lantern from the handle, or try looping the strap around your shoulder. The lantern is made primarily of plastic, but thanks to its IPX4 rating, it’s resistant to water splashes but not necessarily dust.

You can plug the lantern straight into a power source via the included USB cable. It uses rechargeable 3,600 mAh batteries that also serve as a power bank for your phone via the USB port.

Promising Amazon review: “I am a flashlight geek and spend a lot of time outdoors and on the water. The beam on the flashlight is not adjustable but unbelievably bright and clear [...] amazing to me for the price. The lantern part of the light is excellent as a work light or to light a room during a power outage. The flashing red light would be great to have in the event of an auto breakdown . I am buying one for both of my daughters to keep in their homes and to use when camping.”

6. A Night Light That Doubles As A Flashlight

The night light is located on the side of the flashlight, and it has a sensor that detects changes in light and automatically turns the light on at dusk and off at dawn. Unlike the other options on the list, this flashlight comes with a charging base that plugs right into a wall outlet, rather than a charging cable. You can keep it plugged in to ensure it’s fully charged whenever the overhead lights go off.

You can snag the flashlight as a single or in packs of two or six, in case you want to keep a backup light in multiple areas of your home. While this option is designed for indoor use and isn’t water-resistant by any measure, it is backed by 4.7 stars after well over 2,000 customer ratings — a fair tradeoff for its overall convenience.

Promising Amazon review: “These work great — we keep them always plugged in (and charging) so if the power goes out we know where they are and they're fully charged. We have ours set to light up when the power goes out so it helps by both identifying where it is, and help light the area if power goes out at night. We have two of these around our house, and after the extended power outages last [February] in Texas, these really came in handy. I bought several more to give to my elderly family members so they'd always have a fully [charged] flashlight available and they can easily locate it.”