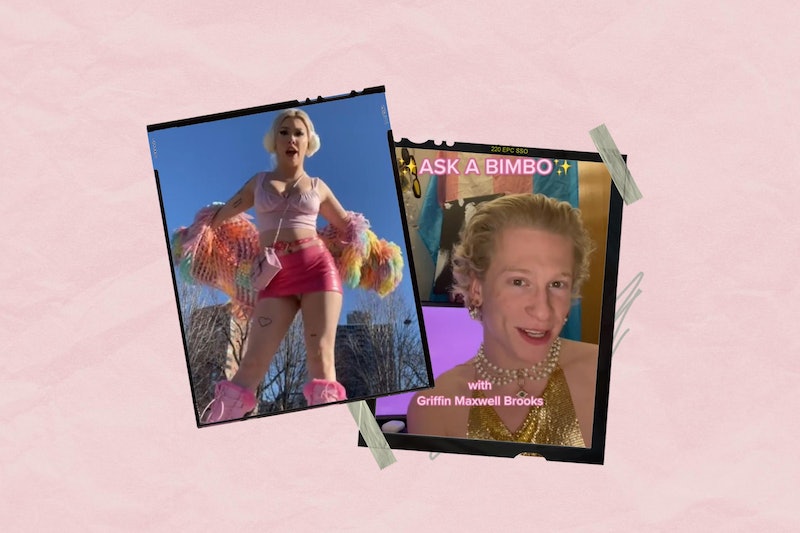 What is a bimbo? Well, it depends on who you ask. One Urban Dictionary user (anonymous, of course, and male, most likely), defines the term as “a woman who is not attractive enough to be a model, not intelligent enough to be an actress, and not nice enough to be a poisonous snake.” Jeez, who hurt you? Another user defines the same term as “a hyperfeminine woman who does not judge others for body modifications, is naively kind, and carries a lot of confidence in herself and her sexuality.”

Whatever form of the word you’re familiar with, “bimbos” are taking over the internet. On TikTok, the tag #bimbo has 1.5B views, and #bimbofication has more than 113M views.

What began as the reclaiming of an age-old insult — as seen before with words like slut and whore — has become a new subculture online, complete with its own visual aesthetic, inside jokes, and political ideologies. Welcome to BimboTok.

Bimbos Of The Internet Age

In 2020, viral creator @griffinmaxwellbrooks unpacked the idea of the bimbo in a satirical welcome video, which earned 1.8M views and 630K likes. They went on to post multiple videos deep-diving into bimbo culture, including an “ask a bimbo” series. The key to bimbofication? “Maximizing your personal slay,” says Brooks.

As they describe it, “it isn’t about the way that people perceive you. The bimbo has no gender, no race, no class or ability. The only requirement for bimbofication is that you embrace and reclaim your body in the name of independence.”

There is a visual aesthetic that accompanies the modern bimbo: hypersexualized, feminine, often fuzzy and pink. One user, @abihasbigjugs, brought the “bimbofication scale,” popularized on Twitter, to TikTok. In her viral video, she shows photos of her friends, placing them along the scale, which ranges from “girl next door” Bella Swan vibes to certified bimbo.

However, this aesthetic is not for the benefit of men or to feed the male gaze. The bimbo aesthetic is one that reclaims femininity and sexuality and promotes confidence — full stop.

History Of The Bimbo

TikTok didn’t invent the bimbo, though it is largely responsible for its modern evolution. @bimbotheory on TikTok educated the internet on the history of the term in a video that now has more than 682K views, 186K likes, and hundreds of comments like, “learning about my heritage💕.”

In her video, she traces the bimbofication timeline back to the 1920s. The original definition of the word originally referred to a foolish man rather than a woman. “Himbos were the original bimbos,” explains @bimbotheory.

The original bimbo, as shown in @bimbotheory’s video, was actor Jean Harlow, who was known for her curvy figure, platinum blonde hair, and sexualized, ditsy on-screen persona. Notable figures in bimbology that would follow Harlow include, of course, Marilyn Monroe and Jayne Mansfield, who ushered in the “breathy voice” that remains a staple of the aesthetic. “New age bimbos,” as @bimbotheory describes in other videos, include pop culture icons like Anna Nicole Smith and Megan Fox.

What Is The Bimbo Ideology?

Bimbology online has evolved beyond a fashion and beauty aesthetic and into a subculture, one that shares political and ideological opinions. On TikTok, it stands in line with communism, democracy, and orthodoxy.

The bimbofication of the internet is a fuzzy pink reminder that feminism has many faces, and an existence free from the male gaze can still be feminine, sexual, and covered in glitter.