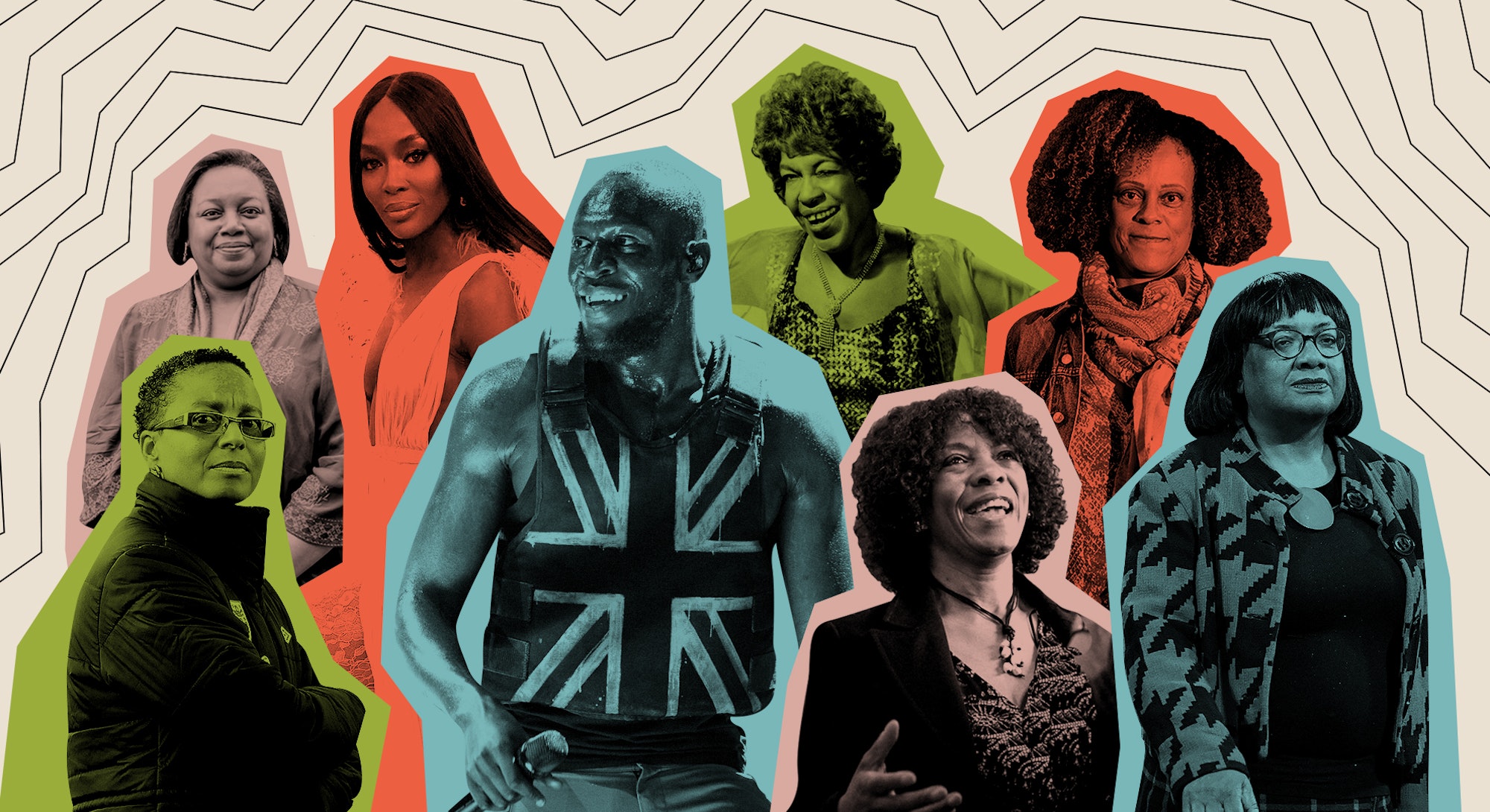 Throughout October, Black History Month – which has been observed in the UK for more than 30 years – highlights and celebrates the contributions and achievements of people of African and Caribbean heritage in the UK.

Right now, there are a number of initiatives and individuals working tirelessly to make Black British history a permanent fixture in schools and in wider conversations. This includes The Black Curriculum, Black Cultural Archives, Mireille Cassandra Harper of DK Books’ Timelines From Black History, and illustrator of Black British Figures, Varadaizo.

However, as it stands, Black history remains notably absent from the national curriculum. Per The Guardian, of the 59 GCSE history modules available from the three biggest exam boards in the UK, only 12 explicitly mention Black history, and only five of those are about Black people in Britain.

In honour of UK Black History Month, we have compiled a timeline of important firsts achieved by Black Britons. It's by no means an exhaustive list, or a substitute for improved education on Black British History in the UK, but it is a chance highlight events and individuals many of us were not taught about in school. And worthy of celebration as many of these individuals and events are, it's also a reminder that there's still much work to be done, as the firsts continue to roll in right up to present day.

The daughter of a British naval admiral and an enslaved Caribbean woman, Belle was brought up as an equal in London's Kenwood House by the admiral's uncle, the 1st Earl of Mansfield. Her story was made into a film in 2014, starring Gugu Mbatha-Raw in the title role of Belle, and some have argued she provided inspiration for the character of Fanny Price in Jane Austen's Mansfield Park.

Stewart took his seat as Tory MP for Lymington 125 years after the British Parliament was officially established. However, he remains a controversial figure in Black history as he was a slave plantation owner and received compensation when the enslaved people he held in Guyana were freed.

John Kent was the son of Thomas Kent, who was brought to Whitehaven in the UK as an enslaved man before being freed. Kent served a police officer in Maryport and then Carlisle, and a blue plaque commemorating his contribution was unveiled in 2019 on the site of Maryport's old jailhouse.

Cole came to England from Sierra Leone in 1873 to study at Oxford and became the University's first Black scholar. He was an advocate for Black people and, per Oxford University, was known for his linguistic talent. He was described by the court at the time as possessing "an unusual command of 'the tongue that Shakespeare spoke' a felicity of expression, good taste, and intellectual force."

Wharton was an all-round athlete who first signed as a semi-pro player with Preston North End as goalkeeper. He went on to play professionally for Rotherham United and Sheffield United. Meanwhile, Andrew Watson, who came to the UK from Demerara, Guyana, is thought to be the first Black player of association football at international level, playing for Scotland in the early 1880s.

Peters had a difficult start, growing up in London orphanages after his Jamaican father was mauled to death taming lions in a British circus. When he signed with Bristol Rugby Club in 1900, and some players protested and resigned because he was Black. He then went on to play for Plymouth and Devon, before winning his debut cap for England against Scotland in 1907, and later moving from Union to Rugby League.

Ambrose Adekoya Campbell formed the West African Rhythm Brothers during the WWII and they first performed at VE Day celebrations in London in May 1945. They became a backing band for Black ballet company, Les Ballets Nègres in London, before getting a residency at the Abalabi Club in Soho. Campbell –who was born in Lagos and came to the UK on a convoy ship that docked in Liverpool – was a pioneer of modern Nigerian sounds, and continued to make music until his death in 2006, at the age of 86.

Busby co-founded her publishing company Allison & Busby with Clive Allinson at the age of 23. She went on to run the company for 20 years and this year, she's the chair of judges for the Booker Prize. Zadie Smith has said Busby "helped change the landscape of both UK publishing and arts coverage and so many Black British artists owe her a debt. I know I do," per The Guardian.

Allen started her career in nursing before making the switch to sign up with the Metropolitan Police on seeing a newspaper ad for the job. Of her first day, she said: "On the day I joined I nearly broke a leg trying to run away from reporters. I realised then that I was a history maker. But I didn’t set out to make history; I just wanted a change of direction." She was stationed at Croydon, before being posted to Scotland Yard, and then Norbury police station.

Constantine came to live in the UK from Trinidad, when he was invited to play cricket for Nelson in Lancashire in 1928. The impact he had on racial equality in the UK was significant: he became chair of the League of Coloured Peoples in 1947; became Trinidad and Tobago High Commissioner to Great Britain in 1961; and as a result of his political work, he was knighted by Queen Elizabeth I in 1962, before being made Britain's first black peer in 1969, sitting in the House of Lords.

Fashanu broke new ground in multiple ways: he was the first Black footballer to command a seven-figure fee and the first professional footballer to come out as gay – still the only top-level player to do so publicly in the UK. He sadly died by suicide in 1998, and The Justin Fashanu Foundation has since been set up in his name, founded by his niece Amal, to confront prejudice and discrimination within football, and offer support to the LGBTQ+ community.

Wood came to the UK from Barbados, first serving in parishes in Shepherd's Bush and Southwark. On becoming Bishop of Croydon in 1985, he said: "It was a big occasion because I was then becoming the first ever Black Bishop in the Church of England. At the service at St. Paul’s Cathedral there was not enough room, as people had come from all over the world." He was known for working to improve race relations and social justice in the UK, and in 2000 was appointed Knight of St. Andrew (Order of Barbados) by Queen Elizabeth II for his contributions.

Despite a lack of support from the Labour party, and backlash from opponents, Diane Abbott successfully stood as Labour MP for Hackney North and Stoke Newington, which she continues to represent today. She was sworn in in 1987, along with three other MPs of colour, Bernie Grant, Paul Boateng, and Keith Vaz. Per The Guardian, Abbott recalled: “This was the height of the ‘loony left’ scare and we were the epitome of the loony left.”

After winning 66 caps for England Women, scoring 35 times, Powell became the first Black woman to manage an England National football team, from 1998 to 2013. She was also the first woman to obtain a UEFA Pro licence, the highest qualification available to a European coach. And at the 2009 European Championships, she achieved what no male manager had done since 1966 and took her team to the final.

Blazing the trail for Black British women at Glastonbury, lead singer Skin reminded us – and Stormzy, after he made an error in a tweet – of her first, 20 years on from the event. Speaking to The Guardian in 2019, she said: “If I’m really honest, I was way more irritated when Beyoncé said she was the first Black woman. I really like Stormzy and I think he does a lot of good... The guy has so much class. He DM’d me personally and it was a lovely message. We had a little conversation. We’re all proud of the fact he’s a Black man, doing the Black man things.”

Sworn in with Diane Abbott in 1987, Boateng went on to make history when he became the first Black cabinet minister, as chief secretary to the Treasury. On his appointment, he was reported to have said: "First and foremost I am a cabinet minister. My colour is part of me but I do not choose to be defined by my colour. I work for a world in which people are not judged by their colour but by the content of their character. I want to be judged by my work in this position."

Just a year after Boateng, Amos was appointed secretary of state for international development. Born in Guyana, she's a powerful advocate for human rights, with a focus on Africa in particular. In October the same year, she became leader of the House of Lords, the third woman ever to hold the position.

The English-Nigerian basketball player became the first NBA player to publicly come out (post-retirement), in his 2007 memoir Man in the Middle. On coming out, he said: “You stop being the person who scored this many goals, ran this fast – you’re just the gay guy and that’s disappointing." What convinced him to do so anyway, was attending Pride in Manchester. Per The Guardian, Amaechi said: "People need to know that Black people can be gay. And that one does not make the other lesser."

On becoming the first Black Children's Laureate, the award-winning author of Noughts & Crosses (and many other novels) vowed to continue her work to advocate for more diversity in children's books. "We need more books that are specifically about the BAME British experience," she said in 2013, per The Guardian. "That's why I bang the drum for getting more diverse books out there, and for getting rid of the idea that if a book contains pictures of a Black or Asian child, it's going to have a limited market."

Anderson became Victoria Secret's first Black British Angel aged 26, the sixth Black model to become an Angel. She announced it on Instagram, with the caption: "This is something I was even scared to dream about because I never thought it would come true."

Evaristo was awarded the prize for her novel, Girl, Woman, Other; joint winner alongside Margaret Atwood for her novel, The Testaments. On the impact of winning, she told Bustle earlier this year: "The best thing is the readership: that these 12 primarily black British womxn are now reaching all corners of society." She continued: "My breakthrough means that people of colour in this country, who would normally be overlooked, are actually embraced by the publishing world, and supported to publication, and to reaching their readership. That's what's most important."