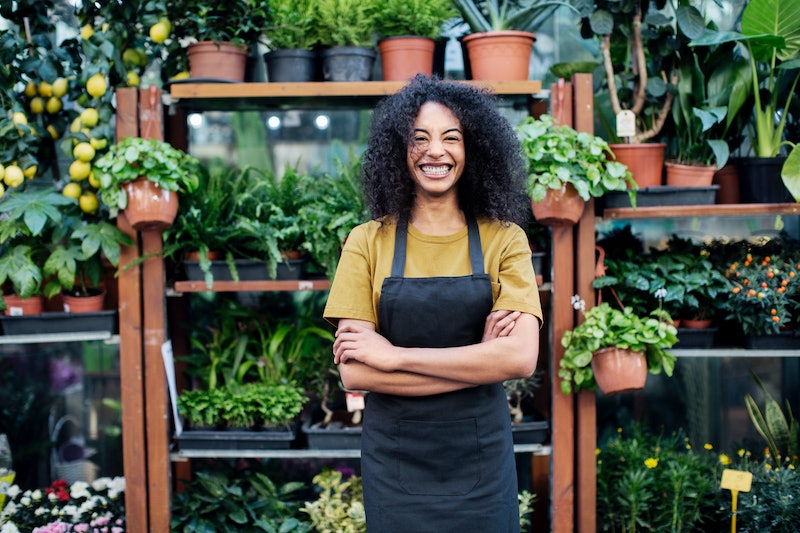 In the wake of widespread anti-racism protests across the world in May and June this year, allies rallied together to support Black communities and businesses. And early signs say it's helping. A new report reveals that Black-owned businesses have seen huge sales following Black Pound Day on June 27. The new initiative (which will now take place on a monthly basis) encouraged supporters to use services and purchase products from Black-owned businesses both locally and online. According to findings, 8/10 businesses surveyed made more revenue in June 2020 "than the whole of 2019."

The report was published by data and marketing agency Translate Culture and UK black business discount card Jamii. Their analysis found a massive 369% revenue increase in June across the 10 Black-owned e-commerce businesses they spoke to. And, for half of the businesses featured, 87% of June's income came from new customers.

Speaking about the benefits of the initiative, Natalie Manima, founder of homeware brand Bespoke Binny, said in the report: "It has helped me massively by exposing me to a wider audience. I have always known that my products had the potential for mass appeal, but felt there was an element of gatekeeping that prevented me from reaching audiences outside the black community." Manima says she actually sold out of products in June and the growth in sales continued in July. "When I restocked in July it was my highest grossing month ever since I started Bespoke Binny in 2013."

For Black hair and skincare brands, the first Black Pound Day proved extremely successful. As explained in the report, of the revenue generated on the day, 58% went to "fast moving consumer goods" including as hair and skincare products.

It's an interesting result but, for Black women like me, not a surprising one considering haircare takes up much of my income. Black women are said to spend six times more on haircare than their white counterparts and the Black hair industry is worth an estimated £88 million. Yet, for years, afro haircare was ignored by mainstream cosmetics brands. Black Pound Day is an initiative that seeks to change that.

Speaking in the report about Black Pound Day, founder of online afro haircare marketplace Hair Popp Dominique Lescott said: "It's not just an opportunity for black people and other communities to shop with black-owned businesses, but also for our businesses to show up and demonstrate the value of our products or services."

Lescott added: "Speaking openly about some of the struggles and criticisms faced by black business owners (such as why black-owned hair brands were more expensive and why there aren’t more black-owned black hair shops on the high street) led to a lot more interest."

Black Pound Day was also opportunity for Black people to support within its community. Per the report, "it's estimated that the Black British community has a spending power of £300bn, yet only 2% of this is spent within black businesses." The new initiative "motivated black consumers" to spend with brands more "tailored towards the black community."

The second Black Pound Day took place on Saturday (August 1) and the hope is that the momentum seen in June can be built on each month. This new report seems to suggest that, with the help of allies, the tide can be turned and Black businesses can continue to receive similar support in the coming years, leading to "economic empowerment of the community as a whole."

See the full 2020 schedule for Black Pound Day here (the event takes place the first Saturday of each month) and find out more information about the initiative on the Black Pound Day website.

More like this
Boris Johnson’s Leadership Is In Question – Again
By Bustle UK
What Is Happening With Sheku Bayoh’s Case?
By Sophie McEvoy
The UK Abortion Laws In 2022, Explained
By Sophie McEvoy
Windrush Victims Are Still Waiting For Compensation
By Sam Ramsden
Get The Very Best Of Bustle/UK