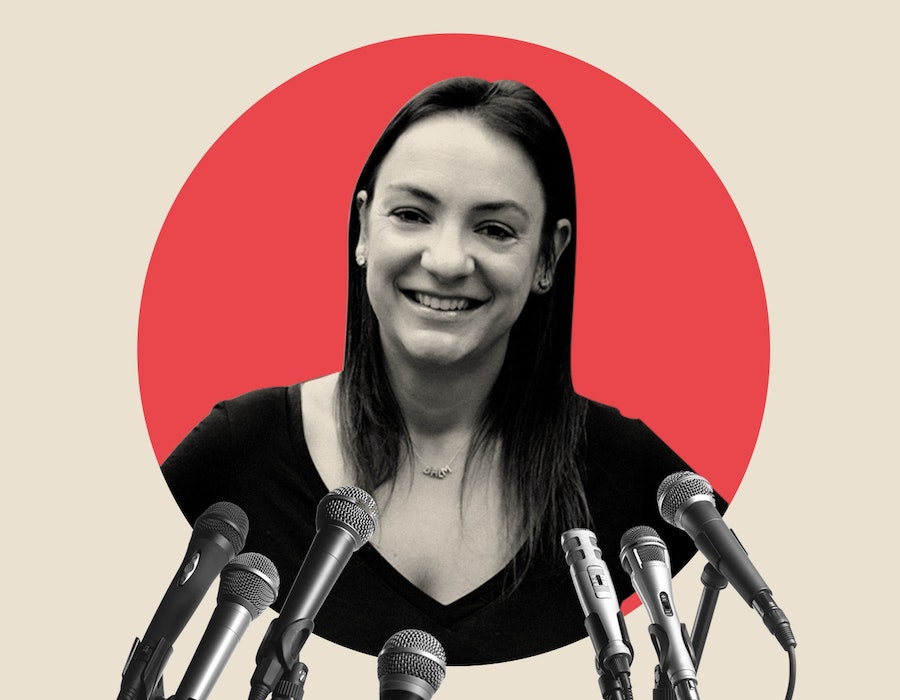 In Bustle’s Quick Question, we ask women leaders all about advice — from the best guidance they’ve ever gotten to what they’re still figuring out. Here, Maya Smith, executive director of the Born This Way Foundation, tells Bustle about breaking the stigma around mental health, the brilliant advice Lady Gaga gave her, and the importance of setting boundaries.

In 2012, at nine months pregnant, Maya Smith flew against medical advice from Washington, D.C. to Los Angeles to learn more about Lady Gaga’s Born This Way Foundation (BTWF) — which aims to support young people’s mental health and create a kinder world through programming, conversations, and partnerships. Prior to meeting with Lady Gaga and her mother Cynthia Germanotta, who co-founded the nonprofit together, Smith spent nearly eight years as the CEO and COO of Mobilize.org, a now-defunct organization that gave millennials the resources to build solutions for social issues.

“As a soon-to-be mom at the time and as someone who spent my entire career focused on youth voice and youth leadership, [BTWF] felt like a perfect combination, and it continues to be the honor of a lifetime,” says Smith, 37, who now serves as the nonprofit’s executive director.

Under Smith’s leadership, BTWF introduced Channel Kindness, a digital platform in which young people share stories of kindness, resilience, and community. Then there’s the Please Stay pledge, a response to the troubling suicide rate among teens. In May, billboards began appearing all around the country that say, “This is the sign you’ve been looking for. Please stay.”

“The greatest privilege and sometimes difficulty is just knowing the consequences of this work. It drives me to do it better, because if I can save even just one family from what mine has gone through, then it’ll be worth it,” says Smith, whose relative died by suicide around 10 years ago.

Below, Smith shares what fuels her work, how the pandemic reignited BTWF’s mission, and how two-time Olympic gold medalist Abby Wambach helped her turn a mistake into a teachable moment.

Tell me about challenges you faced during the pandemic in regards to bolstering mental health awareness.

My job is to tell people that it’s OK to not be OK, that however they’re feeling is valid, and that there are resources and an entire community that exists for them. The year 2020 was the first time where I needed to tell myself that, too. To do this work when you yourself are not OK was really hard. On a personal level, I’ve never needed our work more. On a professional level, I’ve never felt more urgency around it.

What do you think someone wanting to work in mental health awareness needs to understand in order to be successful?

You need a lack of judgment, as well as a recognition of people’s various experiences and a willingness to validate their pain and their feelings, even if you don’t understand them. You also must have a deep love of people and for how fragile life is and understanding of how everybody has a role to play in helping to save someone’s life. I literally go to Starbucks in the morning like, “Whose day can I improve?” You never know who could use a smile or who could use a literal reason to live.

BTWF is one of the few organizations created for and led by young people. How did that come about?

When I first started at the foundation, I had a meeting with [Lady] Gaga, so I came in ready to work like, “What’s the impact you want to have in the world?” She’s like, “Slow down, Maya. We need to talk to the young people. I want to build a foundation that’s based on the experiences, the voices, and the input of young people.” So the first thing that we did was create the first youth advisory board, which continues to be the guiding force of the work that we do.

It sounds like Lady Gaga gave you some solid advice. On the flip side, what’s the worst career advice you’ve ever received?

Someone once told me to not speak for the sake of speaking in response to a meeting that I was in, where they felt like my voice was being heard too much. They said that women have a habit of speaking for the sake of being heard, and that I shouldn’t do that. That was a little bit of a jarring comment, but I’m pretty immune to the unhelpful things people are saying to me.

What’s been one of the greatest lessons you’ve learned so far?

During a speaking engagement at Miami Dade Community College, a young woman approached me. She was crying because she was sharing a vulnerable experience, and I said to her in a very mothering way, “It’s OK. Don’t cry.” Abby Wambach was standing nearby and actually stepped in to say, “Actually, cry. It’s OK to cry. I celebrate whatever emotions you’re bringing to this moment.” I remember thinking, “Why did I have the urge to in any way stop the emotions that she was brave enough to share with me in this moment?”

More like this
Dyson Is Dropping Futuristic, Air-Purifying Headphones
By Rachel Lapidos
The Millennial “Queen Of Manifesting” On Turning Jealousy Into Inspiration
By Faith Xue
Ashley Benson Revealed The Whole-Body Effects Of Her Anxiety On TikTok
By Stephanie Topacio Long
Emily Ratajkowski Believes You Should, In Fact, Get Bangs
By Rachel Lapidos
Get Even More From Bustle — Sign Up For The Newsletter