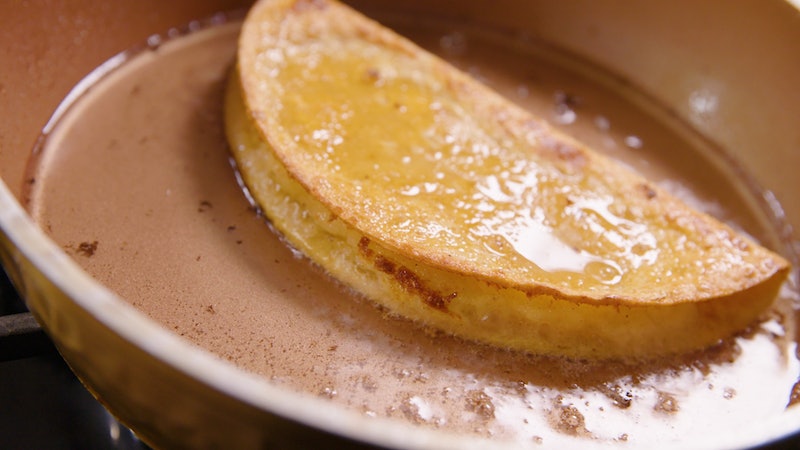 Tired of eating the same thing over and over again? In desperate need of some fresh recipes? Then keep an eye out for Bustle Cook Club. This brand new YouTube series, which launched on Jan. 14, will feature chefs breaking down and discussing their fave meals. Kind of like a book club, but with food.

First up is Mexican American chef Esteban Castillo who shares a recipe for tacos de papa (fried potato tacos) from his cookbook Chicano Eats. These crispy tacos are filled with garlic-y mashed potatoes, lightly fried in oil, and then topped with refreshing ingredients like radishes, lettuce, and a drizzle of homemade tomatillo sauce.

Castillo explains how to make them using easy, step-by-step instructions, meaning even the most inexperienced cook will be able to follow along. He also shares tips to help you produce the best result possible. For example, did you know that you should always warm tortillas before working with them? That way they won’t rip when you try to fold them or stuff them with ingredients.

Bustle Cook Club will share tons of tasty recipes like this one, as well as the stories behind them. In this video, Castillo talks about growing up in southern California. He says he didn’t start to cook until college when he was struck with a bout of homesickness. To feel a bit better, he’d call his mom and ask for family recipes, just like the kind his abuelitos would make when he visited them in Mexico.

Castillo’s cooking became a way to honor his grandparents, who earned their living through food. The tacos de papa recipe comes from his abuelita, and he says it’s one that has the power to instantly transport him back home. Castillo is excited for folks to work — and eat — their way through his cookbook.

Check out Castillo’s taco recipe, and all the recipes that will be shared via Bustle Cook Club on the Bustle YouTube channel. It’ll be the spot to turn to for easy new recipes that you can make at home. You know, so you can finally give your go-to delivery service a break. Add in the fact they come with personalized stories like this one, and there’s a lot to look forward to.