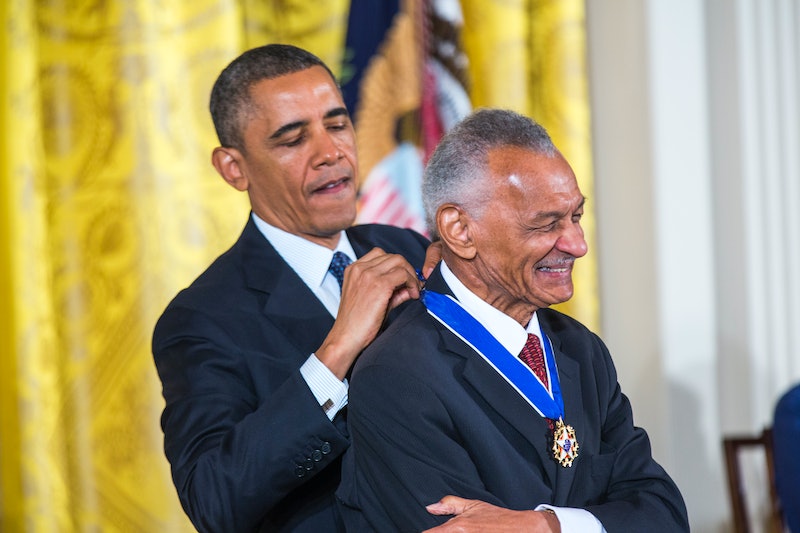 On Friday morning, civil rights leader Reverend C.T. Vivian died from natural causes at his home in Atlanta, Georgia. His career advocating for civil rights spanned more than half a century, and included organizing the 1961 Freedom Rides and non-violent direct action training throughout the civil rights movement.

Though many Americans cite the 1950s as the start of the civil rights movement, Vivian played a key role in sit-in demonstrations in the '40s in Peoria, Illinois. The Freedom Rides, aimed at integrating buses traveling across state lines, also started in the late 1940s, though according to the The Martin Luther King, Jr. Research and Education Institute at Stanford University, the 1947 Freedom Rides did not receive widespread media attention because they did not yet venture into the Deep South. Just as sit-ins in the '50s and '60s received greater media attention, so did the later Rides that Vivian helped organize. He also played a key role in the 1960 Nashville sit-ins.

In 1961, after gaining the trust of Black students in Nashville through his sit-in organizing, Vivian helped over 400 Americans directly resist Jim Crow laws in order to challenge the segregation of interstate travel. Freedom Riders risked and often lost their lives, and at 36-years-old, Vivian was the oldest Nashville Rider. Facing violent white mobs and firebombing, Vivian and other Riders continued their work, bringing national media attention to the brutality of racist violence. Vivian's colleague Reverend Martin Luther King, Jr. voiced support for the Rides but did not physically participate.

Vivian is also well-known for his fierce advocacy for Black voting rights in the South. The moment that might stand out most is when he was punched in the face on national television by segregationist sheriff Jim Clark of Dallas County while attempting to register Black voters. During that 1965 argument in Selma, Alabama, Vivian was standing up against Clark's red herring argument that he was trying to prevent people convicted of felonies from voting — this rhetoric is still used today to place severe voting restrictions on Black people. Still, Vivian's activism in the face of televised white supremacist violence fueled the protests that ultimately pressured Congress into passing the Voting Rights Act of 1965. The law not only led to Black voting rights across the country, but also to the ousting of Jim Clark from the sheriff's office.

Vivian was awarded a Presidential Medal of Honor by President Barack Obama in 2013. He continued to speak out publicly against attempts to thwart voting equity across the country as recently as 2015, which marked the 50th anniversary of the Voting Rights Act that Vivian helped get passed.

More like this
24 History-Making Black Women You Probably Didn't Learn About In School
By Ayana Lage and JR Thorpe
6 Organizations Fighting Police Brutality That You Can Support Right Now
By Syeda Khaula Saad and JR Thorpe
These Artists Are Reimagining Black History Month To Create A Better Future
By Katie Mitchell
25 Inspiring Quotes From Black Women To Celebrate Black History Month
By Kyli Rodriguez-Cayro and JR Thorpe
Get Even More From Bustle — Sign Up For The Newsletter
From hair trends to relationship advice, our daily newsletter has everything you need to sound like a person who’s on TikTok, even if you aren’t.