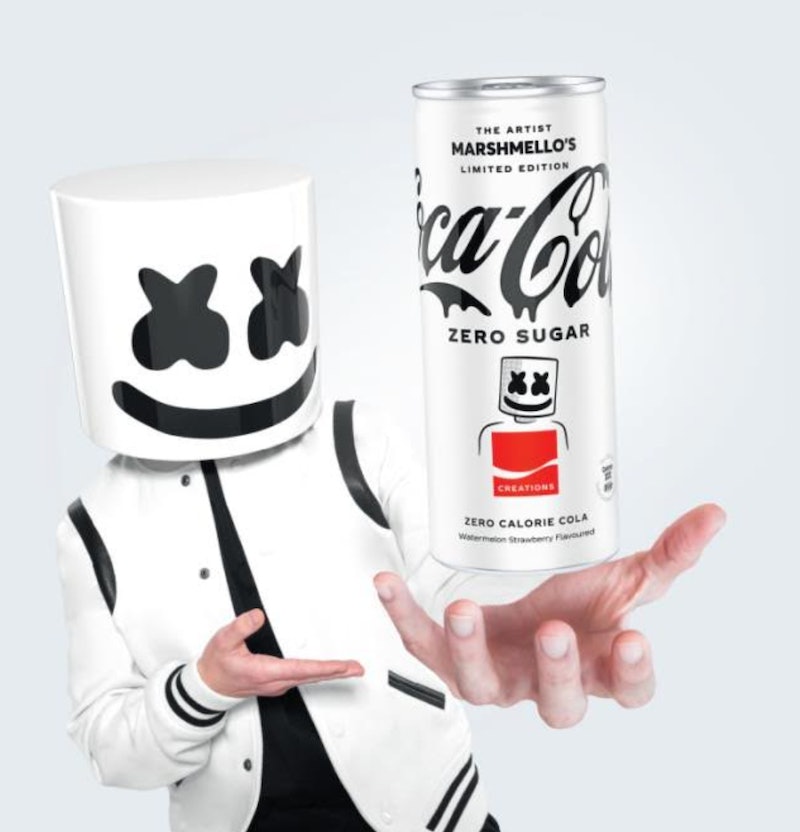 Not content with trying to harness the taste of outer space with their limited edition cans of Intergalactic Coca-Cola earlier this year, the famous purveyor of fizzy caramel-hued drinks has now branched out into musical collaborations. The next in a series of new collaborative drinks inspired by creativity and culture, American EDM producer and DJ Marshmello has come on board to create his own limited-edition spin on a classic.

Reckon you can make a pretty good guess when it comes to the flavour notes? Think again! Instead of going straight for the obvious route (marshmallows, anyone?), the music producer’s concoction draws on a “vibey blend” of his two favourite flavours: strawberry and watermelon.

“One might think Marshmello's Limited Edition Coca-Cola would be marshmallow flavoured,” reads a press release, “but as with the epic drops that fill his sets, the magic here is more unexpected.”

“Everybody’s like, ‘You’re going to do a marshmallow flavour?’” Marshmello added, speaking to Billboard. “That’s why I really didn’t want to do it, so we just started messing around with different flavours... we homed in on [strawberry and watermelon] and that was that.”

Punters who have already stumbled across the cans have been occasionally perplexed by this decision. “Can someone explain why Marshmello Coke isn't marshmallow-flavoured, please?” @DazelBrain tweeted. “My man, marshmallow was right there,” quipped @3x1minus. This small technicality aside, though, early impressions are looking good. Taste-testing the new bev, Buzzfeed highlighted its “​​light and fruity” flavour notes, adding that it’s “kind of at the sweetness level of Cherry Coke, but it's a little less... heavy.”

Intrigued to find a fruity fix? You’ll want to get yourself down to Tesco. But be warned: Once stocks run out, that’s it. Elsewhere, Budgens, Londis, Booker Premier, and One Stop stores are also selling these bevs, and there’s a Zero Sugar version available, too. Either way, it’ll set you back 77p for a slimline can.

More like this
The Finger Lickin’ Good KFC x HYPE Collab Serves A Bucket Bag For Chicken
By Darshita Goyal
I Tried The $20 TikTok Viral Oishii Strawberries — Here's What I Thought
By Sophie Hanson
Trust Me, Pickle Martinis Are The New It Drink Of The Season
By Emma Carey
10 Breathable Bedsheets To Keep You Cool During The Heatwave
By Orla Pentelow and Sophie McEvoy
Get The Very Best Of Bustle/UK