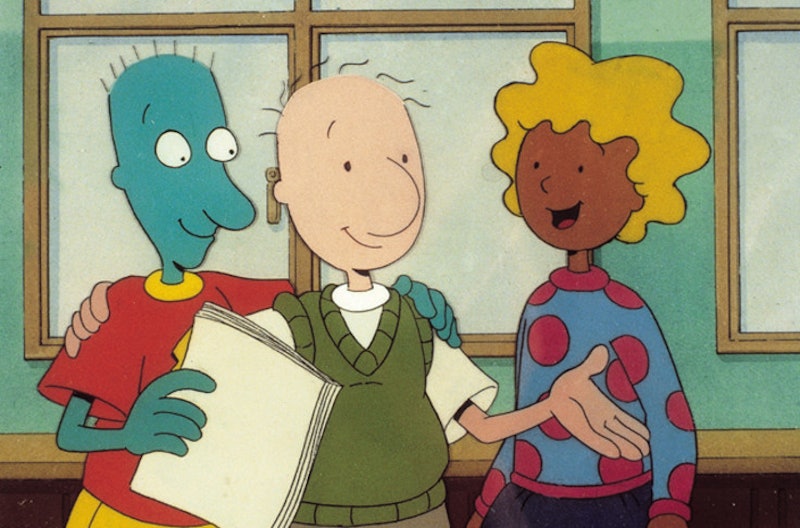 It can be slightly comical to look back upon the (mis)adventures of our '90s kids youth. OK, who are we kidding, it can be downright hilarious reminiscing over some of the ridiculous things we did back then. But you know what? There were also lots of things you did with your friends in the '90s that were actually pretty creepy. Some of these strange slivers of nostalgia prove creepy in a too-close-for-comfort kind of way. Others, well, they are downright spooky. You guys, what were we thinking?

Having said that (and having often asked myself that very question in response to far too many memories from my youth), I'm gonna go ahead and say the thing you're not supposed to say: Being creepy (in a non-threatening way) was fun. Sure, now I can comfortably say that some of the things my BFFs and I did together were just plain bizarre and unnerving. But back then, doing these things gave us life. It's hard not to remember them through rose-colored lenses, because the '90s were a magical time for friendship — any time spent with your squad was time well spent, even if it wasn't. You know what I mean? As the expression goes, ignorance is bliss. And I, for one, am glad we were so blissfully ignorant of our innocent creepiness.

So if you grew up in the '90s, join me in taking a proverbial tour of some of the creepy things we all did with our besties back then.

I don't mean to be rude ... but WHY? I was absolutely the driving force in this trend among my circle of friends, and I honestly have no words for why I thought summoning the beyond via the Ouija, Bloody Mary, or "Light as a feather, stiff as a board" was a solid idea. BRB, just have to go take a bath in holy water to ward off the demons that inevitably followed us back and are waiting to turn our lives into yet another Paranormal Activity sequel.

C'mon now. Don't try to pretend you didn't personally victimize at least one friend with the social dagger that was the covert three-way call. This all-too-common tactic — by which you lured an unwitting friend into saying something unbecoming about another friend secretly on the line — was shady at best, and an invasion of privacy at the worst. It was just... not cool.

3. Sharing Things That Ought Not To Have Been Shared

My BFFs and I shared every fad, fashion, trend, and even crush the '90s served up on a silver platter. Don't like your flavor of Ring Pop? Trade with your bestie. At a sleepover and forgot your toothbrush? No worries! To be clear, best friends today probably still overshare in equally creepy and gross ways — sans the '90s stuff. We're all sick, sick people.

4. Cyber Flirting With The Same Person

Those of us who grew up in the '90s were relegated to cyber flirting late at night, after the parental units had passed out, when we could sneak into the dining room and fire up the family dinosaur (aka desktop computer). This often occurred when your BFF was over, because it made you feel like Thelma and Louise or something. In reality, the only real lingo you knew was a/s/l and these cyber flirting sessions often ended with you two dissolving into a fit of laughter.

You didn't like the Backstreet Boys. Your bestie didn't like the Backstreet Boys. Body glitter made you itch. Your best friend banned the very mention of it. In the '90s, people loved their fads and fashions fiercely — yet you and your BFFs magically hated all of the same ones, despite popular opinion. This wasn't creepy in a "what were you thinking?" way but, rather, in a "wow, that's eerie" kind of way. Because, for real, you really did hate the same things.

Is it appropriate social etiquette to leave your friend 27 nearly-identical AIM messages because her gosh damn Away message kept popping up when you desperately needed to discuss important things (read: how to wear brown lipstick) with her? No. Not even close. But you did it anyway, and she loved you regardless.

7. Driving By Your Crush’s House

Oof. I'm embarrassed to admit how many times my friends and I stealthily drove by a crush's house in my bright purple Ford Aspire. Most often at dark, and always with our seats leaned by to an obnoxious degree to ensure we weren't spotted. Yeah, not a good look. To all the dudes we cruised by back then, I'm sorry. This was weird, even for us.

I mean, really. What did we expect was going to happen here? There were a couple of ways this could have gone but, if we believed the rumors — which is why we were doing this in the first place — one of them involved our stomachs exploding. I'm pretty sure watching that happen to your BFF would have been as emotionally damaging as seeing them get sucked into a Jumanji board.

This article was originally published on July 1, 2016