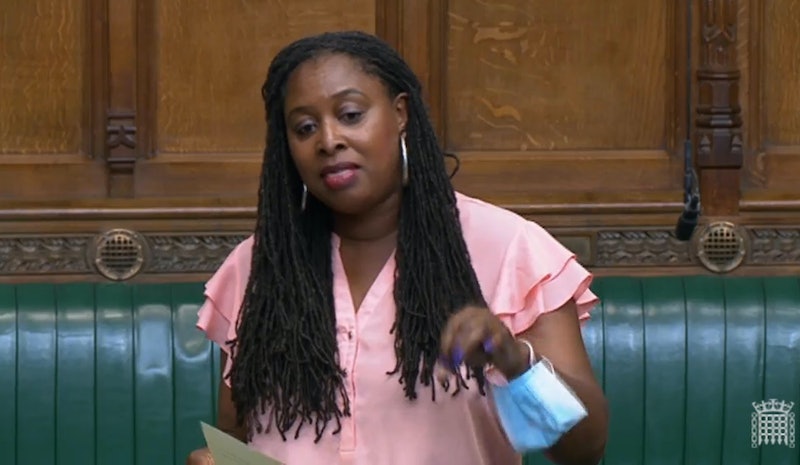 On Thursday, July 22, MP Dawn Butler was asked to leave the House of Commons for calling Boris Johnson a liar. Speaking during a debate, Butler accused the Prime Minister of lying “over and over again” and said his dishonesty was “dangerous.” Refusing to withdraw her accusations, Butler was subsequently ordered out of the House of Commons.

During the final debate before MPs leave Westminster for the summer, Butler accused the Prime Minister of lying about improving the economy, reinstating nurses’ bursaries and investment in the NHS.

Under parliamentary rules, MPs are not allowed to accuse each other of lying in the House of Commons. As Butler was speaking, Deputy Speaker Judith Cummins interrupted the MP for Brent Central and asked her to “reflect on her words and perhaps correct the record.”

Butler replied: “At the end of the day, the Prime Minister has lied to this House time and time again and it's funny that we get in trouble in this place for calling out the lie, rather than the person lying."

Butler refused to withdraw her comments and, as a result, was ordered to leave. Afterwards, she tweeted a video of herself in which she said, “I’ve had enough and I needed to call it out, so I’m leaving Parliament.”

Soon after the incident, Butler sat down with Byline TV for an exclusive statement where she referred to the Prime Minister as a “serial liar.” She continued: “I think, in ordinary times, you have governments that are in the main honest and they are principled. What we have seen over the last 18 months is a government that is truly corrupt to the core.

A video of Butler speaking in the House of Commons has been had 3.7 million and, since the news emerged, the MP has received widespread support. Supporters include actor Dawn French, former England football player Gary Neville, and former Labour party leader Jeremy Corbyn, who tweeted “Solidarity with @DawnButlerBrent.”

“It is high time that the procedure committee envisaged greater scope for MPs who wish to highlight untruthfulness to do just that. The glaring weakness of the present system is that someone lying to tens of millions of citizens knows he or she is protected by an ancient rule. They face no sanction at all.

“By contrast, an MP with the guts to tell the truth is judged to be in disgrace. It is absurd and people can see that it is absurd.”

Editor’s note: This piece was updated on Monday, July 26, to include comments from Dawn Butler and John Bercow’s Times article.

More like this
Iran Has Issued A Death Sentence Over Mahsa Amini Protests
By Catharina Cheung, Darshita Goyal and Maxine Harrison
Footballer Jake Daniels Shared His Thoughts On A World Cup Boycott
By Sam Ramsden
Buckingham Palace Aide Resigns Over “Unacceptable” Comments To A Black Guest
By Shahed Ezaydi
Joe Lycett Just Took HIs David Beckham Qatar Protest To A Whole New Level
By Sophie McEvoy
Get The Very Best Of Bustle/UK