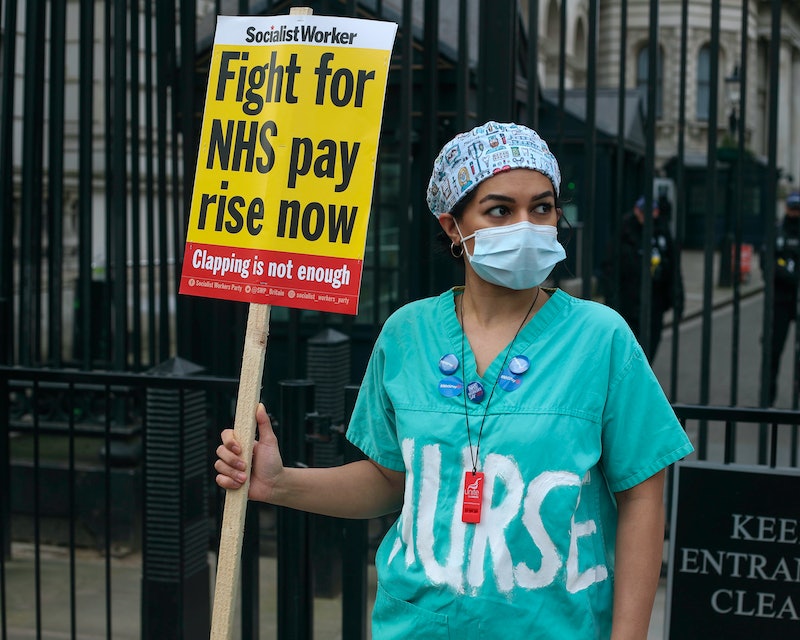 In March, the UK’s Department for Health and Social Care recommended a 1% pay rise for NHS staff in England for their tireless work in the coronavirus pandemic. In July, this was increased to 3%.Several health unions have criticised the small rise, with the Royal College of Nursing (RCN) suggesting a 12.5% increase instead. While a solid recommendation won’t be made until sometime this month, the RCN are planning strike action unless an agreement can be reached and are training up to 25,000 nurses to become activists in their fight for a more significant pay rise.

What Is The Royal College Of Nursing?

The Royal College of Nursing (RCN) is an independent trade union organisation that supports those in the nursing profession. It’s the largest union and professional body for nursing staff in the world, representing more than 450,000 registered nurses, midwives, support workers, and students in Britain and around the world.

Governed by a council of 17 members, the RCN represents “the professional interests of nursing staff working in the public, private, and voluntary sectors.” They have the power to negotiate pay for NHS staff as they are on the NHS Staff Council, and also lobby governments and other bodies “to develop, influence and implement policy that improves quality of patient care.”

They also offer support to their members on matters like employment, career development, immigration, and welfare.

What Is The Royal College of Nursing Planning To Do?

In March, the RCN started preparations for strike action against the government over the 1% pay rise by providing up to 25,000 members with “training to become activists.” These members may start mobilising soon, following the offer of a 3% pay rise which is “actually a 0.6% pay rise” when taking inflation into account, oncology sister Holly Johnston told iNews. “Add this up to 20% of real-terms pay cuts for NHS staff over the last decade. We know our worth, we know this is a deliberate move to destroy our workforce.”

To prepare for strike action, the organisation has enlisted the help of Jane McAlevey, a union organiser and scholar who has helped nurses in the United States to unionise and negotiate better terms for their vital work.

According to the Guardian, McAlevey will offer a six-week course to help nurses channel their “anger and frustration” and channel their passion into engagement, education, and empowerment to be “a force for change in their workplaces and communities.”

Dave Dawes, chair of the RCN’s ruling council, said that this training “will make a huge difference in what the turnout of the [strike] ballot will be.” A strike ballot is something a union must hold in order to hold an industrial strike, which Dawes said looks “increasingly likely.”

How Has The Government Reacted?

In early March, former Health Secretary Matt Hancock said the 1% rise represented the “difficult financial circumstances the country is in” due to the pandemic. “We’ve proposed what we think is affordable to make sure in the NHS people do get a pay rise,” he said during a Downing Street briefing.

Business Secretary Kwasi Kwarteng said the recommendation “has been discussed and established at the right level” on BBC’s Question Time. “No one is doubting that the NHS hasn’t been absolutely first class in this pandemic,” he continued. “What I am suggesting is that the whole economy has been under pressure.”

On July 21, the Department of Health and Social care announced the shift to a 3% pay rise. Health Secretary Sajid David said this increase came after asking “the independent pay review bodies for the recommendations” which he accepted “in full.” According to gov.uk, the pay review bodies considered “a range of evidence” from organisations including the government, as well as NHS and trade unions.

In response, the RCN said the increase will result in staff effectively getting a pay cut. “Nursing staff will remain dignified in responding to what will be a bitter blow to many. But the profession will not take this lying down,” they said in a statement. “We will be consulting our members on what action they would like to take next.”

How Can You Support The Nurses’ Strike?

Signing petitions is a great start, such as this one posted on the government’s petitions site which garnered an official response from the Department for Health and Social Care. A petition here needs 100,000 signatures for it to be considered for debate in parliament, and you can search for similar petitions on its homepage.

Change.org also has dozens of petitions in support of the NHS, including one asking for a 15% pay rise that nearly has 1 million signatures. You can also support this petition on social media with the hashtag #NHSPay15.

The public service union Unison are also running a campaign to give NHS workers “a decent pay rise”, which suggest getting in contact with your local MP to request their support and to raise the issue in the House of Commons.