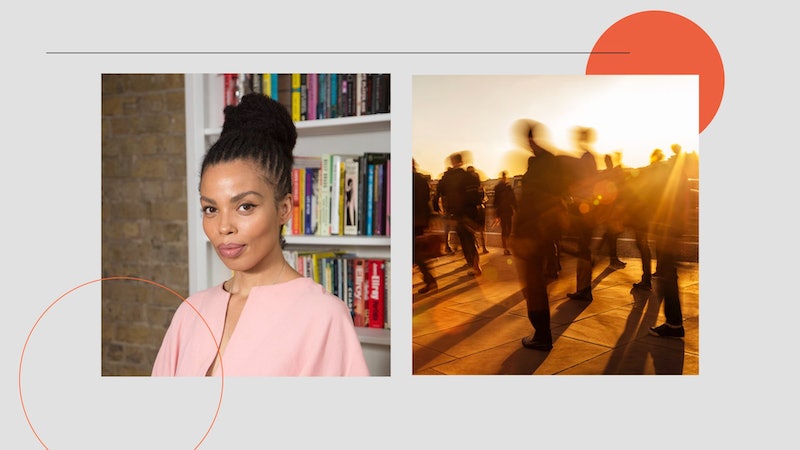 BBC Radio 4's Rethink series asks participants to share their thoughts on how the world should change in the wake of the coronavirus pandemic. In her essay, author Emma Dabiri looks back at the origins of the racial divide and asks why it still informs our politics today. Dabiri argues that, in a post-coronavirus world, people from different societal groups must seek out "affinities and points of shared interest" in order to secure their freedom and the freedom of others. As we continue to reflect on the idea of new beginnings at Bustle, here is Dabiri's Rethink essay, in full.

As the events of the last few weeks have driven home, society is stratified along racial lines. Don’t say you don’t see race because, if that is the case, you cannot see and certainly have not acknowledged the fact that whether you were born Black or white in the UK will have a significant impact on both your life experiences and opportunities.

Race as we understand it today was invented in the 1600s in the English Colonial Caribbean to dehumanise Black life but also to foreclose the nascent solidarity emerging between indentured Irish servants and enslaved Africans. The origins of race remind us that points of solidarity strike at the heart of its rationale and as such remain subversive to the hegemonic order.

As society is stratified along racial lines, it makes sense that, since the 1960s, race as well as gender and sexuality are the sites around which people coalesce to organise against oppression. The 1960s movements were hugely successful in the transformation of political and moral consciousness but did not achieve the necessary restructuring of society. Today, our identities are more deeply entangled in the exchange value of the market. When I speak of identity politics, note: this is inclusive of white identity politics, which asserts itself in potent and violent ways.

"The origins of race remind us that points of solidarity strike at the heart of its rationale and as such remain subversive to the hegemonic order."

Whichever groups exist, a society organised along rigorously policed identity lines imagines fictive kinship where none exists and disavows valuable opportunities for less-expected affinities. Today we are beholden to the double-edged nature that is social media. The very nature of social media, particularly platforms like Facebook and Twitter, rewards outrage by amassing followers, likes, and retweets from both the like-minded and the cowed. Online commentators remain in an angry setting. They will not be compensated in the same way for offering more nuanced, considered takes. Rarely are new alternatives offered. Change is somehow expected to be achieved via the same apparatus that forged the tools of our oppression. What is proposed is nothing more transformative than the nexus of diversity, inclusivity, and representation. These modifications merely tinker with a system which in truth needs to be dismantled and rebuilt from the bottom up.

Our forebears, whose names are much invoked online, including intellectuals like Audre Lorde and James Baldwin, were expansive, luminous thinkers whose angers crystallised into clarity. And others still, such as Malcolm X, more remembered for their earlier work, moved increasingly towards coalition as their work evolved.

"Make no mistake, this is not about some naïve ‘kumbaya’ multiculturalism, [it's about the] identification of affinities and points of shared interest beyond categories that were invented to divide us."

Fred Hampton, leader of the Chicago chapter of the Black Panthers created a Rainbow Coalition between the Black Panthers, the Puerto Rican Young Lords and the working-class southern whites of the Young Patriots. The Rainbow Coalition organised around the idea that Black and brown oppressed people, together with disenfranchised whites, could organise against racism, police brutality, and the inequalities perpetuated by capitalism. In contrast to today’s culture of cancellation, the Panthers had a different approach. Regarding the Young Patriots’ use of the Confederate flag, that despicable symbol of the slave-owning South, Hampton had this to say: “If we can use that to organise, if we can use that to turn people, then we need to do it.” Without being told to, the Patriots renounced the flag themselves, out of respect for the Panthers.

Make no mistake, this is not about some naïve ‘kumbaya’ multiculturalism, nor is it about turning the other cheek or denying the legitimacy of anger. Both guilt and anger collude to obstruct coalition building. The identification of affinities and points of shared interest beyond categories that were invented to divide us in order to more effectively oppress us. It’s about the recognition that the direction we are going in has not liberated us. To further continue in that way rather than seek new directions is an indulgence we can ill-afford.

"Freedom [will be achieved by] cultivating an understanding that it is only in recognising another’s humanity that you can fully experience your own."

As the philosopher Fred Moten reminds us, "The coalition unites us in the recognition that we must change things or die. All of us. We must all change the things that are f***ked up. And change cannot come in the form that we think of as 'revolutionary.' Not as a masculinist surge or an armed confrontation. Revolution will come in a form we cannot yet imagine."

Borrowing from Paul Gilroy in his 2019 Holberg lecture I would like to finish with the words of the poet June Jordan, "The ultimate connection must be the need that we find between us. It is not only who you are but what we can do for each other that will determine the connection. I must make the connection real between me and these strangers, before those other clouds unify this ragged bunch of us, too late.”

You can listen to Emma's reading of her Rethink essay on BBC Sounds here.

More like this
Gen Z Are Twice As Likely To Identify As Queer, According To New Data
By Sam Ramsden
Here’s Where The NHS Nurses’ Strike Currently Stands
By Sophie McEvoy
What The UK Blocking Scotland’s Gender Recognition Bill Means
By Sam Ramsden
Here’s What TikTok's "Mascara” Trend Is *Really* About
By El Hunt
Get The Very Best Of Bustle/UK
Sign up for Bustle UK's twice-weekly newsletter, featuring the latest must-watch TV, moving personal stories, and expert advice on the hottest viral buys.