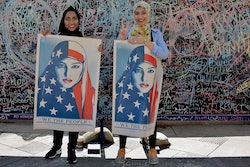 Women have been making history as long as human history has been around. However, women's history was essentially a foreign concept as recently as the 1970s — in fact, it was barely even taught in the K-12 curriculum. Women's History Month gives us 31 days to celebrate the progress we've made, giving long-overdue acknowledgment to women whose accomplishments were overlooked, and recognize where gender gaps still exist. Want to kick off March in a simple, supportive way? Celebrate Women's History Month by donating to organizations that strive to work toward equality.

The wage gap is often among the first disparities mentioned when talking about gender inequality. In 2020, women earned 81 cents for every $1 that a man made when comparing the median salary of men and women. When you take other factors into consideration — like job title, years of experience, which industry they work in, and where they work in the U.S. — that gap narrowed to 98 cents for every $1 made by a man, per data from PayScale.com. However, those couple of cents in lost wages amount to $80,000 over a career. And these numbers don't take into account factors like race or education, which disproportionately impact Black, Latinx, and Indigenous women.

Whether you're interested in closing the wage gap, supporting survivors of abuse, helping girls pay for an education, or fighting against restrictive reproductive legislation, there are plenty of ways to lend support. Start by looking local. Is there a women's political caucus in your city that helps support candidates of underrepresented genders? What do your local domestic violence and women's shelters need? And don't forget about neighborhood branches of national organizations like your local Planned Parenthood affiliate.

Then, check out these 15 pro-women organizations you can support and donate to this March and beyond.

The National Women's Law Center is a D.C.-based nonprofit that uses the legal system to tackle discrimination and injustice against women. Its current 100 Wins 100 Days campaign asks for the Biden administration to prioritize a range of political initiatives from passing the Equality Act to protecting tipped workers, who are primarily women, impacted by the pandemic. You can donate to the National Women's Law Center to support its fight for gender justice.

Every year, 12 million girls around the world are married before the age of 18. Girls Not Brides USA works to increase the government's involvement in tackling child marriage in every region of the world. If you want to donate, you can check out the group's crowdfunding page where you can choose different countries to donate to.

Four out of five Native women experience violence in their lifetime, according to the National Institute of Justice. The Coalition to Stop Violence Against Native Women (CSVANW) is a nonprofit dedicated to ending violence against Native women and children. By advocating for and engaging with tribal communities, CSVANW is working toward a future where all people can feel safe. You can donate to CSVANW to help support their mission.

If you already donate to Planned Parenthood, consider supporting localized reproductive rights organizations like Yellowhammer Fund. Yellowhammer Fund helps provide emergency contraception services to people in Alabama, Mississippi, or the Florida Panhandle. They provide crucial medical services in areas of the U.S. where access to abortion and reproductive health continues to be threatened. Donate to Yellowhammer Fund on their website.

Women for Women International is a humanitarian group that provides moral support to women who are victims of war. They do work in eight countries, including Afghanistan, the Democratic Republic of Congo, and South Sudan. The organization aids women in these areas of conflict by "providing skills, knowledge, and resources that create sustainable change for women, their families, and their communities." You can donate to Women for Women International in cash or even stocks and securities through its official site.

The Trans Women of Color Collective "seeks to shift the narrative of surviving to thriving in our communities." The group provides a network to trans women of color where they can meet entrepreneurs, healers, and collaborators to help them succeed. You can make a one-time donation or donate monthly. You even have the option to donate in honor of someone.

A network of self-described radical feminists of color, INCITE! works to end violence in our homes, communities, and at the state level. They've created accessible activism toolkits to help encourage community organization against issues that disproportionately impact women of color like police brutality and gender violence. You can donate to INCITE via their website and follow their on Instagram.

The National Asian Pacific American Women's Forum (NAPAWF) is giving agency to Asian Americans through their work in reproductive rights advocacy, economic justice, and immigrant rights. According to the organization's site, it's currently the only national organization dedicated to empowering Asian American and Pacific Islander women and girls specifically through community mobilization and political change. Donate to NAPAWF through their website.

The Malala Fund is an international non-profit organization created by Malala Yousafzai, a Pakistani activist for women's education and the youngest winner of the Nobel Peace Prize. The organization, like Yousafzai herself, works to provide education for the 130 million girls who are out of school due to financial issues or social barriers. You can donate to the organization or even use its resources to set up a fundraiser of your own.

The Women's Prison Association works to keep women out of prison, support women who are incarcerated, and help women who were previously incarcerated set up for life afterward. This includes finding affordable housing, preparing them for job interviews, or locating any mental health services they might need. You can donate to the Women's Prison Association through their website.

#HappyPeriod provides menstrual care and products for Black people with periods. The nonprofit was started after founder Chelsea VonChaz learned that shelters rarely receive menstrual products as donations nor are such products required to be in a shelter's budget. You can support #HappyPeriod's mission to end period stigma with a monetary donation or donating period products to your local shelters.

Dress for Success's mission is to help women achieve economic independence by proving them with a support network, work attire, and other development tools to help them thrive in their job and beyond. Your donation will not only go toward purchasing work clothes for women, but also to funding initiatives that help them succeed, including leadership programs that teach them how to make their mark within an industry.

Girls Who Code is a non-profit that aims to increase the number of women in computer science. According to ComputerScience.org, only 20% of computer science professionals are women. Girls Who Code works to combat this disparity by hosting workshops, building a network of alumni, and creating pathways to employment within computing. By donating to Girls Who Code, you can support these programs and the girls who take part in them.

She Should Run recognizes the gender gap within politics and aims to get more women involved in running for political office. It offers online classes and leadership programs that equip women with the knowledge and tools needed to make a name for themselves within politics. You can donate to She Should Run's efforts directly on their site today.

The United Nations Entity for Gender Equality and the Empowerment of Women, also known as UN Women has been working to empower women since 2011. The organization tackles many issues including economic gender disparity, violence against women, and HIV/AIDS. You can donate to UN Women and help support their many programs and long-term projects.

This article was originally published on March 2, 2017