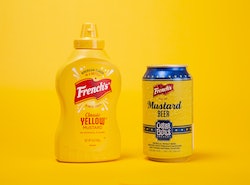 National Mustard Day, a real holiday that exists, falls on August 1 this year. Mark your calendars and prepare your mustards accordingly. As a follow up to last year’s mustard ice cream — more on that in a second — French’s is debuting a limited-edition mustard beer in honor of the mustard-centric holiday. If the words “mustard beer” have you feeling skeptical... same.

This year’s mustard day delight comes in partnership with craft brewery Oskar Blues. The Colorado-based brewery is more than familiar with out-there flavors. Their current beer lineup includes Death By King Cake, an homage to the Mardi Gras dessert, and Death By Affogato, which incorporates notes of vanilla, espresso, and chocolate like its Italian namesake. However, the French’s beer is not called Death By Mustard thus leaving your fate up in the air.

So, what does mustard beer actually taste like? Well, pretty much exactly what it sounds like. I had the honor/horror of sampling French’s Mustard Beer and honestly? Not bad. Dare I say... kinda good even? It's similar to a sour beer with some fruity notes. Along with mustard, the beer is infused with key lime, lemon, tangerine, and passion fruit to create a tart beer. The aftertaste, however, is distinctly mustard, like the ghost of a hot dog. If that's not a complete deterrent, you'll probably be into the mustard beer.

Similar to other savory, snacky beers like pickle beer or habanero beer, the mustard beer is best when paired with something salty. Plus, the combo isn't completely left-field as beer mustard has long been a stable of sports bars and happy hour menus. French's has a handful of other recipes, like mustard beer-basted sausage, if you'd rather cook with the beer than sip on it.

Starting today, you can try out French’s Mustard Beer for yourself by ordering online through CraftShack. A six-pack will cost you $19.99. You’ll also be able to find the limited-edition beer at Oskar Blues Brewery taprooms in Boulder, Colorado, Longmont, Colorado and Brevard, North Carolina. If you’re intrigued at all, you’ll want to get a six-pack ASAP. The mustard beer will only be around while supplies last. The brightest stars always burn out the fastest.

For last year’s National Mustard Day, French’s partnered with ice cream company Coolhaus to create the aforementioned limited-edition Mustard Ice Cream. At the handful of locations where the ice cream was served, you could get a scoop with a pretzel-topped cookie, further emphasizing the sweet/savory combo. Some described the flavor as having “sweet hints of cotton candy and bubble gum ice cream” before the tangy mustard flavor kicked in. While the mustard ice cream is no longer available for purchase, there is a recipe for French’s Yellow Mustard Ice Cream on McCormick’s website, French’s parent company. There are only two reviews on the recipe but both sing its praises... or at least they say that you can’t really taste the mustard. Whether that’s a pro or con is up to you.