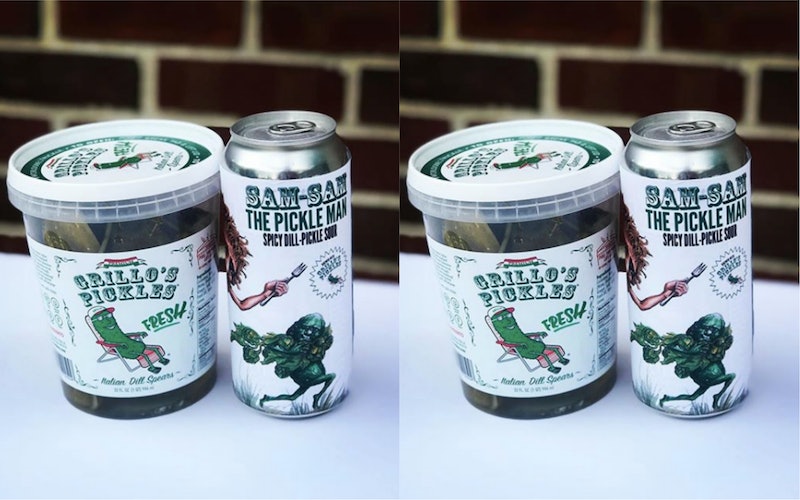 Adding to the growing list of pickle-infused, pickle-flavored, or otherwise pickle-related foods and beverages that are not, in fact, pickles, we have this: A pickle beer actually exists. It’s called Sam-Sam the Pickle Man, and it’s made by Down the Road Beer Co., a brewery based in Everett, Mass. Down the Road created it for the Boston Pickle Fair, which occurred on June 23 — but although the beer is sold out for now, its surprising popularity might mean that we can hold out hope for a new batch at some point in the future.

2018 seems like it’s been the Summer of Pickles: Over the past few months, we’ve seen everything from pickle ice cream to straight-up canned pickle brine hit shops and shelves across the country. But even if pickle beer seems like it might be a step too far, it actually isn’t that bizarre when you really think about it; as the Boston Globe points out, pickleback shots have grown in popularity in recent years, combining booze and brine in a manner beloved by folks with a taste for sour flavors. So, when Down the Road came aboard as a vendor for the 2018 edition of the Boston Pickle Fair, they figured, why not take the opportunity to do some thematically appropriate experimentation? And why not loop in another Boston area favorite, Grillo’s Pickles, to make the magic happen?

Down the Road came into being quite recently; it was just founded in 2015. Grillo’s Pickles goes back a little further, but not much; founder Travis Grillo began selling pickle spears made from a 100-year-old family recipe at a price of two for a dollar around the Boston area in 2008. Within two years, his pickles had been picked up by Whole Foods, and, well… the rest, as they say.

Grillo’s was totally down for the idea of collaborating with Down the Road; as Travis Grillo told Brewbound, “We’re always trying to be innovative, leading the pickle industry with new and exciting things. We’ve always enjoyed working with local brands and try to show love to the city that gave us our first shot back when we were just a pickle cart. Now there’s an entire festival dedicated to pickles in Boston and we felt the collaboration with Down The Road would be something new and exciting this year.”

The beer itself is an American kettle sour, while the pickle brine used is dill-spiced brine that gets a kick from habanero peppers. The result, according to Globe writer Gary Dzen, “tastes of lemon and cucumbers and — I’ll be darned — berries, owing to the habaneros.” It’s not spicy, nor too salty; however, it is sour, so if that’s not your jam, it may not be to your taste.

But what’s in the can isn’t all there is to the can. Down the Road’s cans all feature art by Nikki Rossignol, whose fanciful style and penchant for mythological creatures matches perfectly with the brewery’s own sensibilities. You’ll notice that most of the beers offered by Down the Road are almost fairytale-like in their titles, if not straight-up named for mythological creatures like the pukwudgie and the undine. Accordingly, the can for Sam-Sam the Pickle Man features a sentient pickle on the run from a creature that looks kind of like what I’ve always pictured the Small, Hairy Man in Neil Gaiman’s Stardust to look like. It’s such a work of art that some folks have made an extra effort to get a hold of spare cans — just because they look cool.

Down the Road founder Donovan Bailey was surprised both by the beer and its popularity. “It’s not a one-and-done,” he told the Globe. I thought it was just going to be a novelty thing that people tried to say they had it.” But after the beer made its official debut at the Boston Pickle Fair on June 23, it became available on draft at Down the Road’s taproom, as well as in takeaway cans — which brings me to the bad news: It does not appear to be currently available. By June 26, the brewery was down to its last 10 cases, according to an Instagram post; the last Instagram post in which a photo of the pickle beer appears is dated July 2; and it’s not currently listed as available at the taproom on the Down the Road website.

But hey, given that the beer turned out to be a surprise hit, we can cross our fingers that the brewery opts to make another batch or two again sometime soon. In the meantime, stop by the brewery if you’re in the Boston area; the taproom is open Tuesday through Sunday, there are often food trucks parked outside, and there’s a whole host of pinball machines you can play as you sample what might become your new favorite beer. Yes, please.

More like this
Pret & Costa’s Coffee Is The Strongest On The High Street, According To Which?
By Sam Ramsden
Learning To Love, Not Judge, The Lunchbox Wives Of TikTok
By Esther Zuckerman
16 Valentine’s Day Quotes About Chocolate That Will Make You Hungry
By Emma Cueto
Dunkin’s Valentine’s Day Lineup Includes A Drink That Tastes Like Dessert
By Alexis Morillo
Get Even More From Bustle — Sign Up For The Newsletter
From hair trends to relationship advice, our daily newsletter has everything you need to sound like a person who’s on TikTok, even if you aren’t.