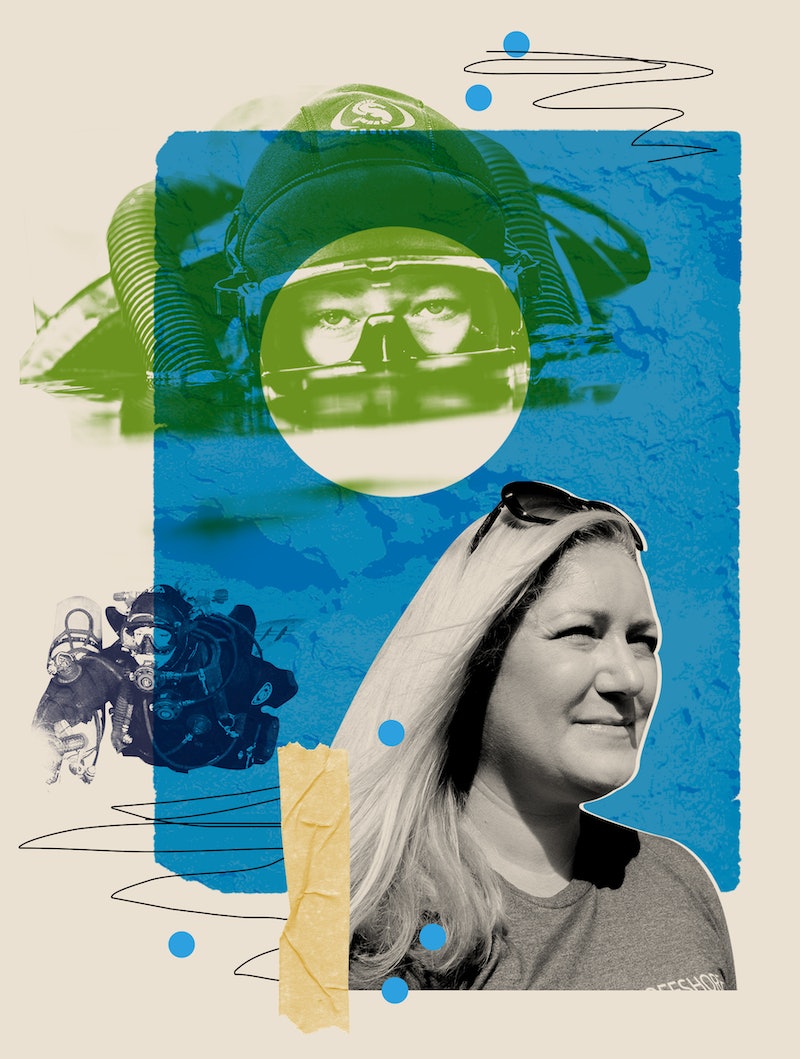 Ocean litter is a phrase many of us associate with plastic straws trapped in the nostrils of turtles. Or plastic bags that are mistaken for jellyfish and eaten by whales. Or maybe even the micro-plastics from broken-down ocean debris that find their way into our bodies through the fish we eat. But most of us aren’t as aware of a different type — ghost gear. This is the name given to lost, forgotten, or abandoned fishing gear. It may not receive as much attention as plastic objects more familiar to us, but it’s no less harmful.

This is where the charity Ghost Fishing UK comes in. Its team of specialised scuba divers — all of whom are volunteers — undertake regular expeditions to retrieve ghost gear and disentangle the wildlife caught up in it. Christine Grosart, who has 16 years of diving experience, is a trustee and team leader of the charity. She’s also an off-shore medic, a former paramedic, a cave-diving instructor, and former jockey. Included in Radio 4 Woman’s Hour’s 2020 Power List, dedicated to women whose work makes a significant contribution to the future of the planet, she’s been described as an “ocean warrior.”

Working offshore may seem at odds with Ghost Fishing UK’s environmentally friendly mission, but for Grosart the former enables the latter. She told Wales Arts Review: “You might think I’m a total hypocrite working in the oil and gas industry. I justify it as, I’m a medic so I don’t actually have anything to do with the fossil fuels process directly. The job gives me the time and money to pursue my charity work in a meaningful way.”

Here she explains the importance of Ghost Fishing UK’s work and shares how it feels to inspire other women to get involved with diving.

Can you tell me more about your family connection to diving and how it has shaped your work?

My mum became a single parent when I was four. She was a scuba diver before I was born and she carried on snorkelling and diving. It was definitely my mother that made sure that I had a lot of confidence in the water. She will get in the sea in November in a bikini and swim. I've never known anyone like her. She just absolutely loves the ocean.

It was definitely my mother that made sure that I had a lot of confidence in the water. She will get in the sea in November in a bikini and swim. I've never known anyone like her. She just absolutely loves the ocean.

She had me snorkelling from age seven. Around the age of 14, every Wednesday evening, she'd go to the local scuba diving club and I'd go with her. Eventually she said, "Look, you've picked the two most expensive sports going, horses and diving, you've got to pick one." And I was like well obviously, horse racing's my career and horses are my thing, so that's what I'm going to do. I always thought I could come back to diving anytime, so I set it aside until I was older.

Can you tell me a little bit about your work at Ghost Fishing UK and what it involves?

We started this up back in 2015. My partner, who's a diving instructor, was out teaching a course in Croatia. He ran into a group from the Netherlands, who'd set up the Ghost Fishing Foundation, a small group of divers going around clearing up lost nets, ghost nets.

It's completely volunteer-led. We set up from a small group of friends and it just expanded and expanded. Now we've got 70 members on our books and a waiting list of 120. Some people get confused because they see our output and they're like, obviously this is a professional job. It really isn't, we're just doing a really good job of it.

We set up [Ghost Fishing UK] from a small group of friends and it just expanded and expanded.

There's loads of divers in the UK who don't really know where they dive. Unless you're a photographer or you like bringing up bits of wreckage, most divers tend to do it for two or three years and then life takes over. So we thought it'd be not only good for the environment but also good for the diving industry, to give divers a purpose for their diving. We've had divers in our organisation that say they probably would have given up diving had they not joined us.

Could you give me a bit more detail about the dangers posed by ghost nets and other ghost gear? What are the risks of it being left to drift in the sea?

The first risk is to wildlife. This stuff is designed to catch fish and it's very good at what it does. If it's left unmonitored, it's not just going to stop catching. But of course, that fish never gets landed, the net never gets pulled in. You could start out with crabs and fish. Then bigger animals come in because of the smell of death. Seals, crustaceans, porpoises, other animals come in and get tangled too. Out in the Maldives, there's lots of poaching, lots of gillnet [a curtain of net that hangs in the water] fishing out there. So turtles are forever being released from nets there. It's just an ever increasing cycle.

The other problem is plastics. A lot of modern fishing net is made of crappy plastic. Over time, they get worn and they break, they get tangled up on the sea bed or wreckage and they get lost. They break down into smaller and smaller pieces and animals ingest those micro-plastics. So even if these nets are dormant and they're not catching anything, they're still going to cause a longer-term problem.

And, of course, the fishermen lose their catch. If all these loose nets are out there catching stuff and they're not landing it, they're losing valuable food. The crabs and lobsters that we pull out are probably sellable. We're pretty clear that these nets in the main, certainly around the UK and Europe, are not being lost deliberately.

When you are able to recover these nets, you find a lot of the wildlife is still alive. So that must be quite positive to be able to say “we've been able to release them”?

Absolutely – and it is really rewarding for our divers. It's extremely time consuming — picking one crab out of a net can take 15 to 20 minutes per person. They get their joints all wrapped up in it and they're an absolute mess. It's a real pain to release them, so it really is all hands on deck.

There was one net we brought in last year, it'd been reported to us by three different divers out on a reef offshore at Plymouth called Hand’s Deep. A beautiful reef, covered in coral anemones. We found it, surveyed it and recovered it. It was 200 metres long and 119 animals were in that and about 80 were alive that we released. And we got that net recycled.

I would imagine, but please correct me if I'm wrong, that there aren't that many women who do the work that you do, who are cavers or divers, is that true?

Offshore – on rigs and boats – women in the UK sector is about 4%. So that's a crumb. It's getting slightly better. There have been some rigs I've been to where it was about 10%. You're away from home for long periods of time. I haven't got any children, I've got no pets, I'm a completely free agent, so I can do this, but most women I know are not in that position. I think that is a stumbling block.

There are very few, if any, women engineers. There are no women divers. There are a few chemists, but it's not great. On our boat, we've got a female captain, but she's had to battle her way to the top and she's got the scars to show it.

It's extremely time consuming — picking one crab out of a net can take 15 to 20 minutes per person.

[As a medic] I've never had a problem getting a job. Everywhere I've been, I've been asked back. I'm treated the same as everybody else. When I first started offshore, I was armed and ready for battle, but the battle never came.

Cave diving is typically a “macho” sport. We are underrepresented. But in terms of caving, dry caving, rope stuff, there are absolutely loads of women in the sport. Not quite 50/50, but nearly. There are a lot of seriously hardcore women in caving.

In scuba diving, plenty of women do it, but not to a high level. As soon as it becomes a bit technical with more gear, you can see the number of women on the boat shrink. If I go out in a big technical boat to do a deep dive, you can guarantee I'm going to be the only woman.

Do you think that's something that comes from women themselves and the messages they receive from society? Or do you think there could be more done to welcome them?

I just think women look at cave diving and go, “well that looks really cool, but I couldn't do that.” It probably is societal, down to perceptions. They're just not told about it when they're doing their options at school. Peer groups [are a factor] as well. When I was growing up, I didn't know anybody who worked offshore, let alone female, so how would I even know that was a job I could do? Since I've been doing it, a lot of my female friends have seriously looked at it and they've gone, "Do you think I could do that?" I'm like, "Yeah!"

What about ghost fishing? Do you find you get interest from volunteers who are women?

We do. When we were up [doing dives] in Scrabster and Orkney, we were almost up to 50/50 male/female on the boats. Plus, I run the show. I actually encourage them into the organisation because there are plenty of diving organisations out there that are quite off-putting to women. They're quite macho or everybody mansplains to women like they're stupid. Whereas this organisation, we've got two female instructors.

That really shows the importance of your presence there to be an example to other people who have that interest.

I've done it myself. I'm approaching 40, I'm way fatter than I ought to be, I drink too much, I consume too much. I'm a normal person. I suppose I enable them to think in a different way. It's great to be able to do that.