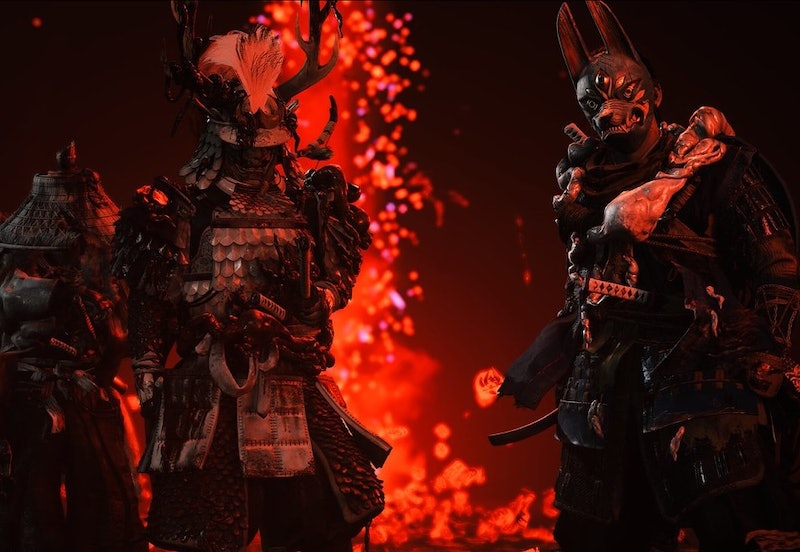 Players have had less than a month to experience the vast open-world experience of Ghost of Tsushima, and now its developers have announced its first DLC. This additional gameplay features an online multiplayer mode, which will expand upon the lore of Japanese mythology. So here's how to buy Ghost of Tsushima: Legends in the UK, because this DLC is going to give players a totally different experience of the game.

Much like Red Dead Online (Red Dead Redemption 2's multiplayer), Legends doesn't follow the story or characters of the main game. Instead of striving to defeat the Mongol invasion as Jin Sakai, you'll have the choice of being a Samurai, Hunter, Ronin, or Assassin. Each class has different abilities and interact with one another in significant ways during combat.

Up to four players can be online together, and the gameplay will differ depending on how many are playing. Two players can play story missions "that escalate in difficulty" as Darren Bridges, Sucker Punch's senior game designer writes on the PlayStation blog, while four players can "take on wave-based survival missions, fighting groups of the toughest enemies" the game has to offer, including new characters with supernatural abilities.

Shortly after the game launches in autumn 2020, four-player raids will be available, sending "you and your partners to an entirely new realm to challenge a brutal, terrifying enemy."

Technically, the new co-operative mode is free if you're already a player. At the end of its announcement trailer, Sucker Punch revealed that it'll be a free download for Ghost of Tsushima owners, i.e. those who already own the game whether physically or digitally. But to access online multiplayer on the PlayStation (and this game is exclusive to the console), you need a PlayStation Plus subscription. You can either pay £49.99 for 12 months, £19.99 for three months, or £6.99 for one month.

This is not to be confused with Sony's other subscription service, PlayStation Now, which is more like Netflix for gaming, offering players an on-demand library of over 600 PS2, PS3, and PS4 games (which can also be accessed on PC). This is the only way to play games from previous consoles, as the PS4 doesn't support backwards compatibility (i.e. putting a PS2 disc into the PS4). Subscriptions cost £49.99 a year, £22.99 for three months, or £8.99 for one month.

Basically, if you frequently play online – and want to make the most of the free download of Ghost of Tsushima: Legends – you'll need a PlayStation Plus subscription. If you want the ability to access classic games from previous consoles like Red Ded Redemption or Fallout: New Vegas, you'll want PlayStation Now. Happy gaming.