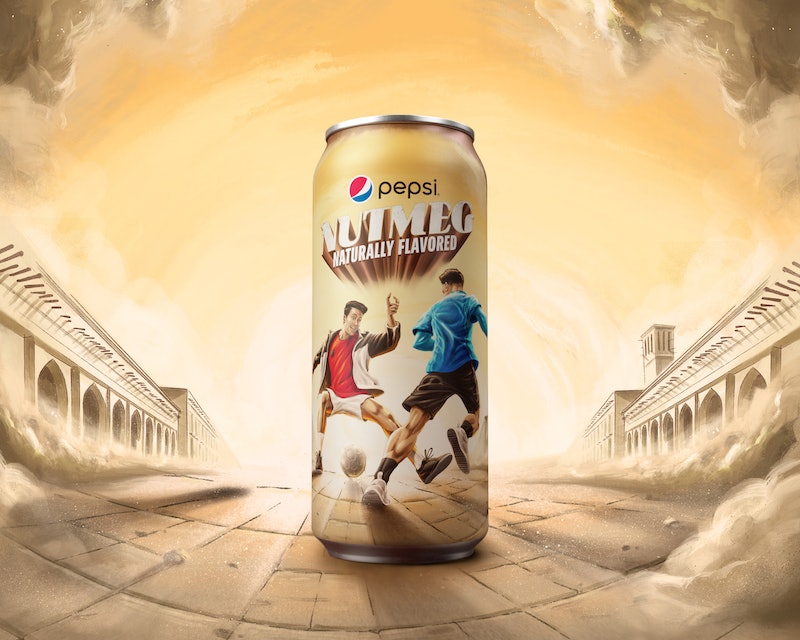 festive scents of pine, cinnamon, and nutmeg just around the corner as pumpkin spice season slows. And, as luck would have it, Pepsi is releasing a brand new – and very limited – flavour, just in time for the holidays. And to coincide with their latest football campaign. But where can you buy Pepsi’s festive drink in the UK?

Dubbed Nutmeg Royale, the campaign’s first advert celebrates “the thrill of the game” by highlighting one of football’s most advantageous tricks, the Nutmeg, which sees the ball kicked through an opponent’s legs. True to form, Pepsi’s new flavour takes its cue from there. “After centering a project around one of football’s craftiest moves, it made perfect sense for us to explore the option of creating a limited-edition flavour that complimented the cunning skill,” Gustavo Reyna, Pepi’s Senior Director, Global Marketing, said in a press release. “From Cherry, to Lime, to Nitro, and now Nutmeg, we love pushing flavour boundaries!”

Instead of the iconic blue and black cans, Pepsi Nutmeg will be sold in a “light sandy colour” inspired by the Nutmeg Royale film, featuring two players demonstrating the trick. As for where you can get your hands on this brand-new Pepsi flavour, the “extremely limited-product run” isn’t available for purchase just yet. I will keep an eye out and let you know when that changes, but for now Pepsi recommends keeping an eye on Instagram, Twitter, and Facebook to know when – and where – you can try this festive flavour that promises to tantalise your taste buds.

This isn’t the first time Pepsi has experimented with a Christmas-inspired flavour. They released a special, limited-edition Pepsi Christmas Cola in Japan in 2017 based on Japanese strawberry Christmas cakes, while in the U.S. they experimented with a Salted Caramel flavour. Sadly, neither of these made it across the pond, so at least this year, UK-based Pepsi drinkers will finally be able to experience the brand’s take on a Christmas-themed flavour. Just a waiting game at the moment.