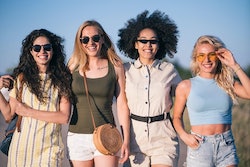 August 26 marks the 100th anniversary of the day on which the 19th Amendment, which gave women across America the right to vote, was adopted to the U.S. Constitution. It's known as Women's Equality Day, and tends to be a day of celebration and empowerment — and frustration, as the fact that women remain pretty deeply unequal in America is brought to the forefront of conversation. But when it comes to pulling out your pussy hat and celebrating all womanhood on the weekend, there's another agenda beyond simply hoping for better gender equality. And agenda that focuses on the inequalities faced by every kind of woman — not just white, straight, cisgender ones.

The fight for inclusivity within the women's equality movement has a long history, far beyond the 19th Amendment itself. These days it manifests as intersectional feminism, in which feminists are called upon to recognize the many differing forms of discrimination and prejudice that mean that, for instance, Latinas across the United States face the worst wage gaps of any race (an average of 54 cents to every dollar earned by white men). To truly act for women's equality and make the 26th a day of worthwhile celebration, you need to celebrate Women's Equality Day in an inclusive way. Not sure how to do that? Here's a guide.

This article was originally published on Aug. 26, 2017