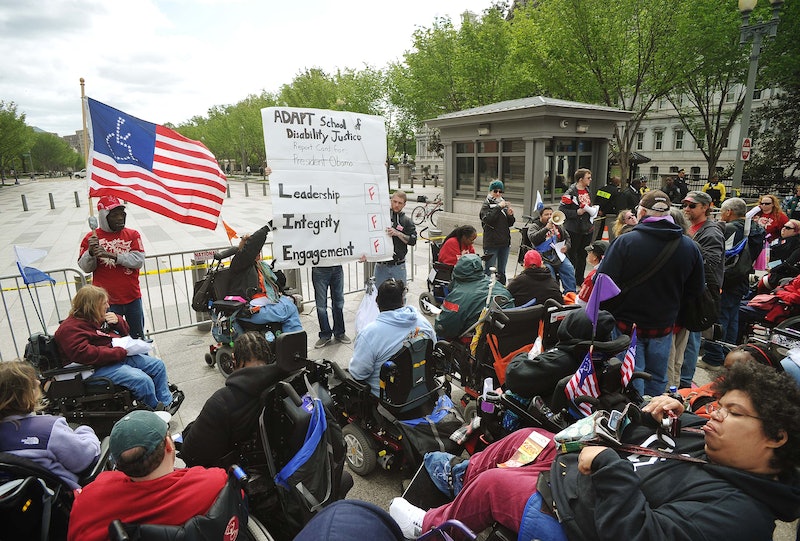 Although the Women's March is going to be awesome, the reality is that not everyone can jump on a bus and head to Washington, D.C — and it's particularly difficult for people with mobility issues or other health conditions. That's why I was thrilled to learn about a virtual Disability March for people with disabilities (PWD) who are unable to physically attend the Women's March in D.C. on Jan. 21 or marches taking place in other states around the nation. In fact, what started as an idea for a blog of a few friends has exploded into an online global movement for politically minded people with disabilities who want to make a stand, Sonya Huber, founder and organizer of the march, tells Bustle.

"My friends were taking a bus down to D.C. and I knew if I did that ... I'd be wrecked for a month," says Huber, 45, a college professor who lives in Stratford, Conn., and has chronic pain. "I was trying to think about an alternative for myself and I started thinking about the large numbers of people that I know who have travel and other activity [limitations] because of chronic health issues."

In mid-November, the Disability March website went live. Here's how it works: Those who want to join the march simply write a 300-word post about why they're participating and what the Disability March means to them, and email it in. The post will then appear on the site, documenting their support and participation. Huber, along with a team of about 20 volunteers, started publishing a couple of posts throughout December, although most of them are being posted this weekend in the wake of Donald Trump's inauguration.

The project has been snowballing on social media ever since it began. To date, Huber and her team have published nearly 800 entries from PWD all around the United States and the world, including Scotland, Australia, Belgium, Canada and the United Kingdom, who do not support Trump or the potential policies of his administration. The team still has another 300 emails to sift through and publish.

"They keep coming in. ... We're all really taken aback," Huber says. "It's really made me a think a lot about how much people who have disabilities want and need to participate politically." The team will be publishing stories through the end of next week; there's also an official Facebook group where people can share their stories and ask questions about the project.

One of the few silver linings of Trump's presidency is how people from all different backgrounds have been joining together to stand up for equal rights for all, no matter who they are, where they are from, or what they look like. The core mission of the Women's March, for example, is to peacefully protest Trump's administration with an emphasis on supporting intersectionality and human rights for everyone, regardless of gender, race, sexuality, religion, socioeconomic status, and ability.

The Women's March is expected to see around 200,000 attendees as the largest inauguration-related protest in the history of the United States. Even more striking is how at least 45,000 of those attendees alone are people with disabilities, also an all-time record. But for those who can't make it on Saturday, the online Disability March is an empowering way for to take action in an accessible way.

"It's always hard for people who can't go to marches or can't make it out to a press conference to express and share their stories," Huber says. "Especially right now with health care being such an issue, it's just as critically important for people to understand that there's not just one challenge, but that there are so many different challenges that intersect that people are facing."

Many contributors are using the platform to bring attention to social programs like Medicaid that many people in the general public don't know about because they don't have to rely on them themselves, Huber says. Several entries outline the authors' fears about what might happen if the Affordable Care Act is taken apart or repealed altogether, especially given the fact that neither Trump nor his cabinet has provided a clear sense of what health policy might replace Obamacare or how the disability community will be protected. (The fact that the section of the White House website previously dedicated to disability issues vanished immediately after Trump was sworn in is troubling, to say the least.)

"A lot of these folks are some of the most vulnerable members of our society," Huber says of the contributors. "So many people are just facing such a huge array of serous health issues. But at same time, so many entries are funny or sassy or very artistic, so the combination of the real serious issues that people face plus the way they're able to express themselves — each entry is so moving on its own."

While the window of time to submit stories for the Disability March is rapidly closing, Huber says she has no intention of taking the project down anytime soon. "It's a continuation of a long history of disability activism," she says. "It's a record of people's lives."