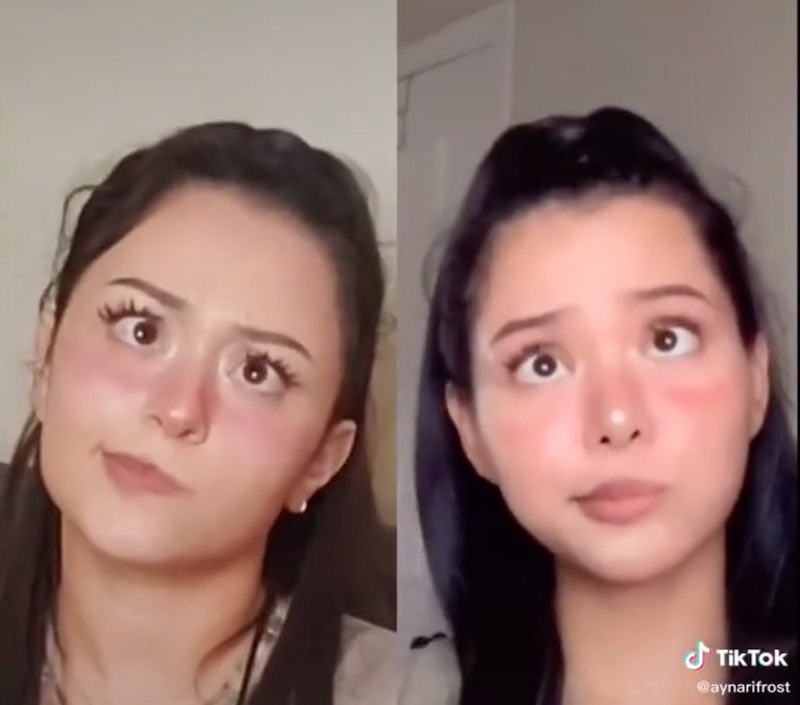 Straight TikTok might have popularized upper body-centric dances like "Savage," but the newest TikTok dance trend is a bit more localized. You'll want to learn how to face dance on TikTok, because the expressive lip syncing videos are wildly entertaining — so entertaining, one face dance video has over 230 million views, and counting.

The Face Zoom lens — which is how creators get that bouncy effect — first went viral on TikTok in February. At the time, creators were using the lens to do the funny face challenge — different sounds in a popular audio would prompt the creator to make a different smirk, grimace, or wink. Cue Addison Rae and Charli D'Amelio scrunching up their noses to the count of "five, four, three, two, one" — it was a cute trend that amassed a library of over 35 million videos. But now the lens is getting new life with a fresh trend that is oddly mesmerizing to watch, and even more fun to participate in.

We have creator Bella Poarch's highly animated face to thank for the resurgence of this effect. Poarch has been playing around with Face Zoom for months, but when she uploaded a video of her lip syncing to a compilation of TikTok's most popular songs on Aug. 15, she got nearly 70 million plays. A few days later, she dug up a 2016 diss track called "Soph Aspin Send” by British artist Millie B., and uploaded a video of her lip syncing to its energetic lyrics. Over 230 million plays later, other creators are posting tribute versions, duetting Poarch's original, and putting their own spins on the trend.

How To Make Your Own Face Dance Video

The Face Zoom lens does basically what it implies: It zooms in on the face of one person in the frame and locks onto it as it moves. This effect creates a tight follow, meaning if the creator moves their head to the side an inch, the lens will sync up to it, keeping their head in the center of the frame. Face dancing — aka, making exaggerated facial expressions, bobbing your head, and looking in different directions — with this lens creates the sense the camera is dancing, too.

To make your own, start by tapping the camera icon and selecting the Face Zoom effect — it's a pink little face in the middle of white frame. You can also navigate to it by clicking on the "Face Zoom" label on videos that have the effect, then bookmarking it for later.

Then, pick out a song that's fun to lip sync to. Fast lyrics, surprising sound effects, and themes that are easy to act out with facial expressions are key. Record yourself lip syncing to the beat.

Once you're satisfied with your performance, share the video and use the #MtotheB hashtag to be added to a library of similar videos — and possibly your friends' For You pages.